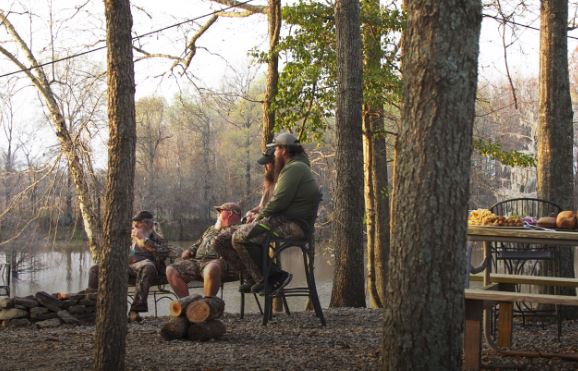 What some of you may not know about Duck Dynasty is that it’s still extremely relevant. While not experiencing the ratings boom that it had two or three seasons ago, it is still one of the top-rated Wednesday night cable programs. I can see why. Not many reality shows can really relate to everyone’s lives. If a show becomes irrelevant, the first indication is the ratings. While some major media outlets would like you to believe that Duck Dynasty has faded into obscurity, I can assure you it has not.

This week on Duck Dynasty: Martin is getting married, so the rest of the guys from Duck Commander (and Al) throw him a bachelor party. Meanwhile, Miss Kay seeks Willie’s help in putting together a petting zoo for her grandchildren…in Willie’s backyard.

Now, I realize that the stories presented in this synopsis I just gave don’t seem to fit with my “cultural relevance” speech from the beginning of this review. Please, give me a chance to make my case. First off, the petting zoo. Perhaps the single most harmless thing in the entire world. It has long been on Miss Kay’s “bucket list” to create a petting zoo for her grandchildren, and she reached that goal. How is this relevant to the viewing public? Anyone can relate to crossing something off their bucket list. I have a bucket list, and I’m sure most people do. Not only that, but the inclusion of the extended family is a proven commodity. Despite what some would have you believe, family-values oriented shows still resonate with viewers. Nobody does family values better than the Robertsons.

What I truly appreciate about the Robertsons is their ability to put their own spin on things. When most people think “Bachelor Party” on a TV show, they think of strippers, gambling, booze, etc. The way the Robertsons do it, however, was just as fun but in their own way. They went out to a cabin and shot off 250+ year old weaponry, made pumpernickel bread, and narrowly avoided karaoke.  I’ve been to bachelor parties on both ends of this spectrum, and this one felt so natural and true to the image the Robertsons have created for themselves. Plus, when you get the men together on this show, it’s REALLY funny.  The Robertsons never stray from their character. They always stay true to form, and season after season, they remain relevant both in ratings and in culture. I was truly impressed with this episode as a reminder of why this family is still relevant today: because they act like family.

As always, here are some of my favorite quotes from the episode:

– “To say that Martin needs some grooming is an understatement. That’s why they call us groomsmen.”- Jase

– “It’s got all the stuff you need. Dueling pistols, gloves to slap people with.” – Si, educating us on the essentials

– “Private Dingleberry. You have insulted my whole family’s honor. Prepare to die, sir.”- Si, before the weapon launching

As always, Duck Dynasty put forth another hilarious episode that never strays from the Robertsons’ core values and image. It’s never boring, and always fun to watch, and “Bachelor Party Blowout” was no exception.

What did you guys think of the episode? Let us know in the comments!