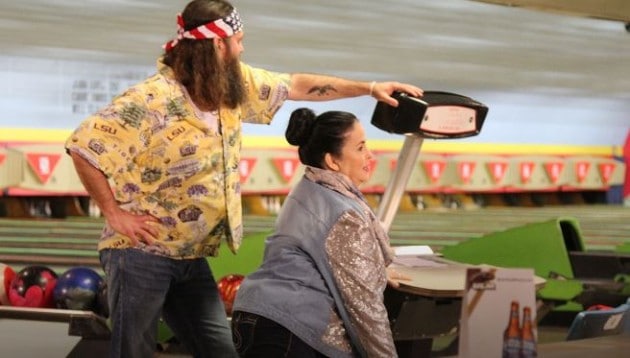 Another week, another quack-filled episode of A&E’s best reality show, Duck Dynasty. While not as deeply rooted in emotional content as the previous couple of episodes, this week’s episode still had a lot of Robertson, and therefore a lot of fun. I will watch this family do anything, and I feel like I have proven that, based on some of the things I’ve watched.

This week on Duck Dynasty: Phil takes Jase, Jep, Martin, Godwin, and Si to buy some hand-crafted duck decoys from a man called “Einstein”. Jase, however, believes he can make the decoys more cost-efficient. Willie, meanwhile, is challenged to a bowling match by Jessica, only to find out that he has to be on a team with his mother.

I’ve said it before and I will say it again, I will watch the Robertsons do anything. Even with an episode as light-hearted and goofy as the one I just watched, the character of each person on the show shines through in everything they do. Really, they’re a fascinating family to watch. Even though this episode was all about making bets and being competitive, it still showed that they can take losses well, be kind and gracious in defeat, and above all, love one another.

I do have a question, though. This episode was structured almost in its entirety around the Robertson men making bets against their parents. Does anyone recall when they began to call their parents by their first names? I mean, in the cutaways, sure, but to them? I distinctly heard Jase call Phil by his first name to his face, and then Willie do the same thing to Kay later. Am I the only person who thinks that’s weird? It’s inconsequential, but I only even got to thinking about it as I realized the two “bets” placed in the episode were between parent and child, both of whom are apparently on a first name basis. This element was a little distracting, but honestly, it doesn’t take away from the fun I had.

-“I love me some honey…so does Jep!”- Jessica, who may or may not have been talking about food

– “His name is Coulvillon. I just call him Einstein Jr.”- Phil

– Jase’s whole speech about how this guy couldn’t be a genius for creating the wooden ducks, but he might be a genius because he sells his stingy father decoys for $1,000 apiece. I have to say, he has a point.

– “They will be mesmerized, hypnotized, and paralyzed” “And then you shoot ’em and make ’em dead”- Phil and Si, each displaying their slightly different sense of poetry.

Trust me, readers. I realize that this show is fabricated, but there is a certain integrity about people that cannot be fabricated. I enjoy watching the Robertson family each week because you can tell that their real personalities shine, even if the bowling matches or multi-thousand dollar bets do not go as planned. It’s a well produced show, and it remains funny, genuine, and has a whole lot of heart.

What do you guys think? Did you enjoy this week’s episode? Let us know in the comments!