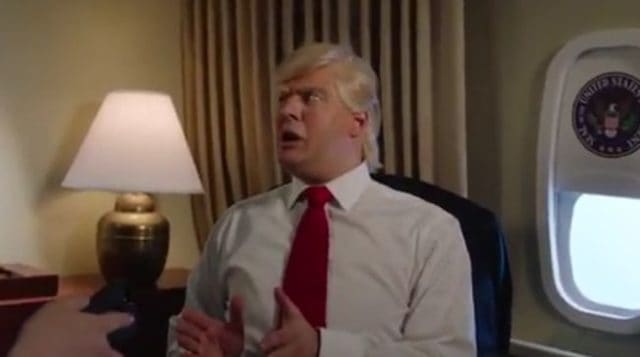 Looks like Comedy Central is fully trying to take advantage of the political success that Saturday Night Live has had ever since Donald Trump took office as President of the United States. Ratings began to soar the moment Alec Baldwin began doing his Trump impersonation. Other acts followed including Melissa McCarthy as Sean Spicer, Kate McKinnon as Kellyanne Conway, and even Rosie O’Donnell teased doing a Steve Bannon impression (which never aired).  But did you know there’s a Donald Trump guy out there who’s considered to be the “very best?” His name is Anthony Atamanuik and he’s going to be the star of a new show on Comedy Central called “The President Show.”

The President Show will premiere on April 27th. If you haven’t had a chance to see Atamanuik’s impression of Trump, don’t worry we have it below. The Mary Sue put it nicely in this sentence with regard to Baldwin’s Trump:

Baldwin’s Trump more than gets the job done, and–like 30 Rock’s Jack Donaghy–it’s funnier when you’re aware of Baldwin’s own personal political leanings, but Atamanuik practically becomes Donald Trump. Atamanuik’s version is also a little less “hapless moron” and more “obnoxious jerk,” making it an ultimately more effective critique than what we get on SNL.

This is why you can expect The President Show to be different and bring its own unique style to the character.  Will it pan out to be a ratings success?  That’s anyone’s guess.  I have a feeling people might be reluctant in the beginning because they’ll feel it’s a “rip-off” show but something tells me once they realize how good Atamanuik is, they’ll warm up to it.