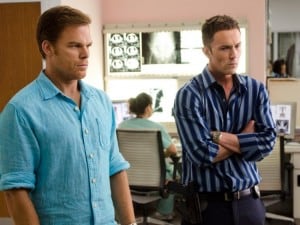 Dexter used to be one of my favorite shows on television. Ever since one of my good friends first told me to check it out a few years back, I’ve been completely enamored by the series. Despite its many ups and downs, the image of Dexter was still unblemished in my eyes, especially after an extremely solid season seven last year.

Then season eight, Dexter‘s final season, happened, and while the first few episodes showed a lot of promise for what the series had in store, it very quickly dissolved into miserable, mind-numbing melodrama. There was no sense of urgency or any type of stakes or risks for Dexter or Deb, and we instead were forced to focus on idiotic subplots involving Quinn and Jamie’s relationship or Masuka’s discovery that he has a hot, twenty-something daughter. However, despite these major issues that I’ve had with the final season as a whole, I still had faint hope that Dexter would be able to deliver an emotionally satisfying finale, which may not have absolved the series of its most recent mistakes but would send it out on a strong note rather than a whimpering one.

For most of last night, I thought the Dexter writers had given me what I wanted. While I had to suspend my disbelief for some of the episode’s big developments (Dexter getting away with killing Saxon in the police station and Dexter being able to carry Deb’s body out from the hospital without being detected), I was content with the Dexter finale and with the emotional resolution that the series was providing. I watched as Dexter lovingly placed Deb’s body into the ocean and sailed The Slice of Life into the eye of the storm, and I breathed in deeply, knowing that this was the end. But it wasn’t. Nope, instead, the Dexter writers couldn’t commit to killing their lead character and instead pulled a Dark Knight Rises, having Dexter fake his death, only to live alone in the middle of nowhere as a lumberjack. What’s that sound you just heard? Oh, it’s all of Dexter’s fans angrily throwing their remotes at their televisions after they spent eight years and 96 episodes watching this series, only to get a hackneyed, undeserved ending that didn’t provide any insight into whether Dexter was still killing or if he had renounced his old ways.

Some may try to say (and already have said) that it was a fitting end to the character, that killing him off would have been the easy way out and not a deserving punishment for his crimes. I disagree. While that idea holds merit, the execution of it by the Dexter writing team was an utter failure. We should not be left wondering how Dexter escaped the storm, or whether he is still killing killers, or how in God’s name he became a lumberjack. These are not in-depth, reflective questions; they are plot holes and missteps taken by the writers that were not fully explained or did not make sense with the character of Dexter that we have known for the past eight seasons.

For me, personally, while I actually enjoyed much of the series finale, that final image of a sad, bearded Dexter, sitting alone in his cabin, will forever tarnish the series’ image and impact for me. I did not need Dexter to give me the ending that I thought was going to happen or the ending that I wanted to happen. No, all it needed to give me was an ending that was believable and true to character. Unfortunately, the series did neither, killing its own legacy in the process. 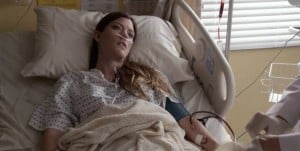 – I was actually okay with the way Deb died, because it allowed for some good moments between her and Dexter, after Deb (and Jennifer Carpenter) has been sidelined for much of this final season. Their goodbye scene, along with the flashbacks (loved how the title of the episode came from Dexter taking care of Deb during their childhood), were my favorite parts of the episode. While I don’t believe that Dexter was the saint that the writers made him out to be (more on that below), I loved how much Deb believed in him. She really was his “soulmate” in a way.

– The main issue with this final season of Dexter is that the writers have gone out of their way to make Dexter look like some misunderstood hero, instead of treating him like the complicated, anti-hero that fans wanted to watch. If the Dexter writers had stopped believing that Dexter was a “superhero” and explored his darker qualities and his actual, legitimate character flaws (like Breaking Bad has done with Walter White), then maybe we have a more interesting and satisfying final season and series finale. Alan Sepinwall discusses more of what I’m talking about in his review, and I completely agree with what we he says.

– I’m actually happy that both Hannah and Harrison got away unscathed. While I feel like there may have been too much emphasis put on Hannah and Dexter’s relationship this season, I did enjoy Hannah as a character, and she proved to be what she said she was: someone who only kills to in order to survive, not for the enjoyment of it. Also, my love for Yvonne Strahvoski may be another reason why I liked Hannah so much.

– Having Deb be Dexter’s “final kill” worked for me on a lot of levels, especially with the intimate and tender way the he lies down with her as she passes. The way Michael C. Hall uttered “I love you, Deb” had so much weight to it and actually made me close to tearing up.

– No one in Miami Metro discovers that Dexter is a killer, keeping their track record of being the worst police force ever completely in tact.

– I still can’t get over it. Dexter as a lumberjack. Seriously, Dexter writers, what were you thinking?

– Thanks for joining me for this final season, everyone. I really appreciate everybody who took the time to read my reviews and commented with their own thoughts about the show. It’s been a lot of fun.

What did you think of Dexter‘s series finale? Did you like it? How did you feel about the final season? And how will you remember the entire series of Dexter as a whole?