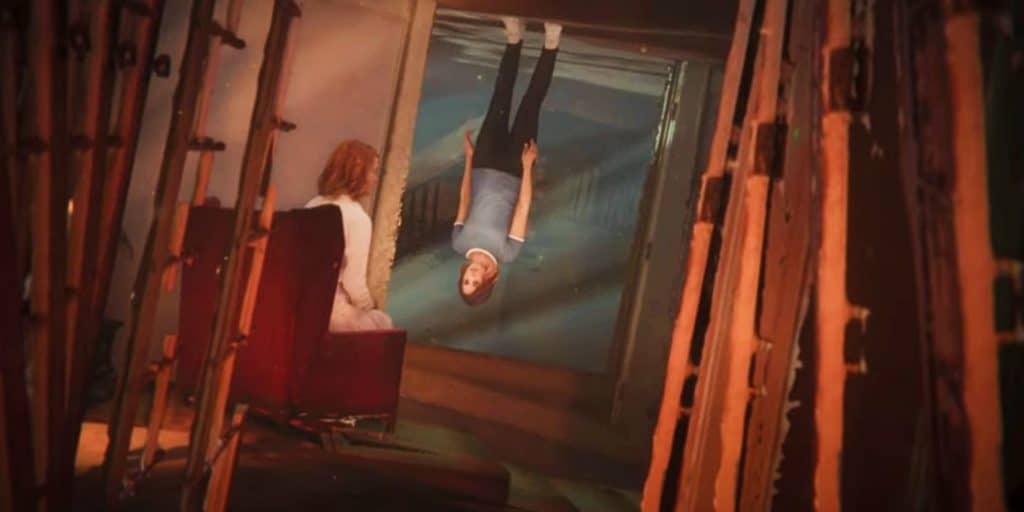 It’s worth mentioning that a lot of us have probably gone into a movie hoping that it will be just as good as it looks, or better. Sadly, this didn’t really happen with Demonic since even the scare factor that was placed into the movie didn’t really go far enough to establish itself as anything other than a jumped-up Halloween gimmick. The idea of demonic possession has been pushed to limits that people don’t want to see in the past, and it’s been made clear that some movies have stepped over the line a bit. Demonic doesn’t even get close to doing this since Carly, played by Carly Pope, is believable enough, but she almost feels as though she’s going through the motions and isn’t entirely devoted to this part. In fact, none of the actors in this movie really feel like they’re giving everything to make it work. It’s possible that I’m missing something, but after watching the movie and going back to review a few scenes, it’s kind of clear that the dim lighting and the use of shadows in much of the movie and light within the simulation scenes were likely meant to be meaningful, but it still didn’t really have the desired effect.

The story does have potential, since the idea of a younger Carly, along with her friends Sam and Martin, going to find her mother passed out in an abandoned building, wasn’t exactly something that would send chills down the spine. In fact, the scariest part of this movie was likely the nightmare that Carly had concerning Sam since bending over backward with a creepy mask on and walking toward someone is actually terrifying in a way, especially when a series of grunts and growls are used to punctuate the scene. But the crow-headed demon feels like more of a cross between a haunted house villain and many other creatures that have come along throughout the last few years. In other words, the villain was ineffective since he only became dangerous near the end, when the Vatican’s black ops team (try to stifle your laughter please) went after it and found out that the creature was a little tougher than they realized.

The long and short of the story is that when she was younger, Carly’s mother Angela torched a retirement home and poisoned a group of people in a church, which managed to get her locked up. Carly intentionally stopped contacting her mother and years later was contacted by someone about Angela, as they stated that she had wanted to see Carly. Upon finding her mother in a coma and being told that she could communicate with her inside a simulation that would connect their minds, Carly does so after being convinced that it’s necessary. Unfortunately, what Carly finds is that her mother didn’t ask for her, the creature that possessed her did, and it then sets its sights on Carly, causing horrible dreams and visions that Carly’s old friend, Martin, has been experiencing as well. Carly refuses to believe what’s going on but has no choice but to believe when their friend Sam goes missing in the woods near the old building where they found her mother all those years ago. The ‘doctor’s that were helping her with the simulation turn out to be black ops soldiers hired by the Vatican, who are apparently skilled at exorcising demons and found Carly in order to tempt the demon into coming forth, as it was trapped in Angela’s comatose body.

Things go south, people die, and in the end, only Carly and Martin are left alive after Carly, upon being possessed by the demon, stabs herself with a holy relic to exorcise the creature. There was a lot of potential with this movie since the story is one that’s been told a few times, but could have been given a serious edge that might have allowed it to hit the mark in a much different and more effective manner. To be certain, this movie is akin to the promise of a jelly donut that only turns to be filled with air, since after getting past the build-up to the main point of the story, it kind of deflates in a hurry as the rush to the end gives the impression of someone falling through the stage curtain and trying to bundle it up so that the closing scenes can be experienced with as little hassle as possible.

There wasn’t quite as much hype for this movie, which is a good thing, but it is kind of difficult to say that this movie was as entertaining as it was supposed to be. The fact is that it could have been great even for something that didn’t have a huge budget, but the writing just wasn’t the type that was bound to get more than a mild shiver out of most horror fans.