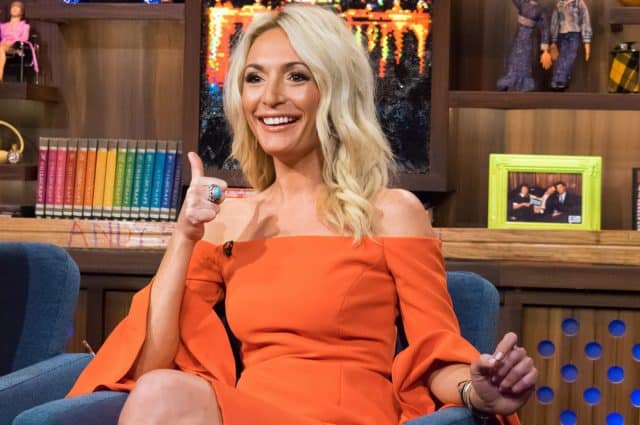 Below Deck returns to Bravo tonight and we’re obviously excited to see Kate Chastain back on the air.  But before we do we wanted to share a pretty interesting story that broke about her yesterday.   Turns out that the reality show was actually in a real shipwreck and her yachting skills came very much in handy.   According to Page Six, Chastain was on a speedboat which ran into a coral reef that landed she and some others on a desert island for three days:

“The speedboat I was on, we were on our way down to Turks and Caicos, just the captain, his friend and I, and the captain wanted to cut corners and get there quickly and he hit a coral reef and we were shipwrecked for three days on a desert island.  I went down to my closet and I was like, ‘Leather jacket, you’re coming with me. Okay, Pucci dress, I can wear you out.’ I don’t know where I thought I was going, I was going to a desert island if I survived. But my first instinct was to grab my most treasured clothes. [The captain’s] brothers came over on a boat from Miami and towed us back, ’cause he didn’t want to call the officials because he’d be in trouble for hitting the reef,” she said.

Sounds like her experience wasn’t quite the horrific one that many people encounter when being stranded on an island.  In fact it seems like she had a pretty decent time.  We only wish that filming would have occurred.  But there’s plenty more of Kate left in season 4 of Below Deck.

For the Below Deck return to Bravo tonight, here’s a brief synopsis of what’s going to happen:

Kyle pushes Sierra’s patience to the limit; Ben’s latest masterpiece has a nearly lethal effect; Kyle bonds with one of the charter guests while Emily and Ben take their relationship to the next level.Chef Ben Robinson’s brother James visits and gives his opinion to Ben about Emily. Sierra calls Kyle a “queen,” which crosses the line for him. In addition, an area in one of the guest rooms gets damaged after some drinking and goofing off with Ben, Lauren and Nico. Meanwhile, Kyle downs a bottle of Fireball.