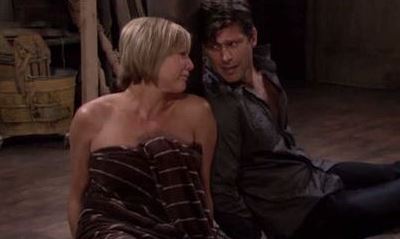 Days of Our Lives fans know that Eric and Nicole are in love and that they are currently sharing a bed. And we also know she’s lying to Brady about where she is. We know that she is not with her own brother in Chicago, and we know that Brady also knows this. He cannot seem to get over the fact that she is lying to him, and he can’t figure out what to do about it. He called her brother, found out she is not there, and now he knows for certain where she is.

Nicole did not want to hurt Brady, but here she is. She is with Eric, she cheated, and things aren’t going well for her. She’s feeling very guilty, and she should. She’s going to find that this is not going to be easy for her. She’s going to make the decision to say goodbye to Eric and go home to Brady, but it’s too late. He is aware she lied to him, where she was, and he doesn’t need details to know what she did. And now it’s too late.

He’s hurt, and he’s making his own poor decisions. He is going to make it his mission to take her down and make her suffer the same way he is suffering. We think he might turn her in for murder, and she might lose her baby. He will threaten her with this, and that’s enough for her to know she’s done with him for good.