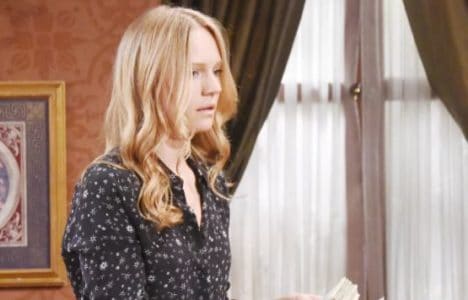 Days of Our Lives fans aren’t sure Abigail is going to keep this marriage up much longer. She’s going to ask Andre to help her. She needs to find out what her new husband is up to, and she has a feeling it’s illegal. He told her he needed to get married to stay in the country, but that doesn’t seem real. We know he’s in love with her and wanted to be with her, but tricking her into marrying him seems a little bit over the top even to us. What might he need or want from her?

He’s into some illegal stuff, and she’s going to find out what it is. Even if it means getting the police involved and potentially hurting him, she’s going to do whatever she can. She doesn’t want to involve Chad in this problem. He’s already so disappointed in her, he’s moved on, and he’s in enough trouble following the party that she doesn’t want him involved.

But what will she find? What is Dario up to, and what does he want with her? Will he put her life at risk to get ahead of whatever he is doing? We aren’t entirely certain that he would do something like that, but we also know there is a good chance he’d do whatever if it meant getting himself ahead in life. He’s got some shady dealings going on right now, and we aren’t sure he’s willing to do anything for anyone but himself.