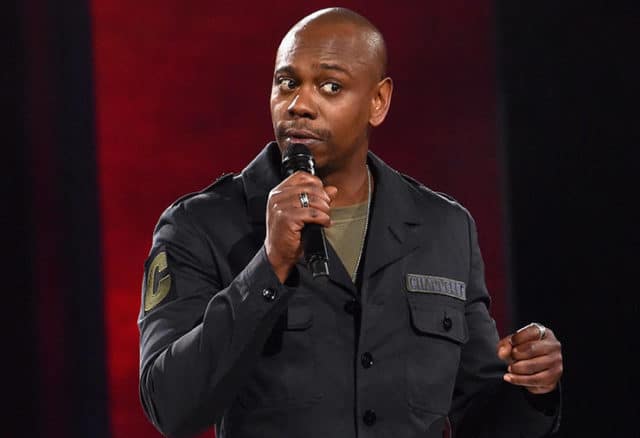 There are no weak people in Hollywood. I might have to disagree with Chappelle on this one but his comments still did ring pretty true when he was talking about what might be going on in Hollywood. While there are all types in Hollywood I believe the truth is that trying to out some of them for their behavior might not be conducive to a long and healthy life. People are made to do things in Hollywood against their will even if they end up later saying it was their idea. Position, influence, power, all of these are methods that are used by those in power to keep people quiet, to get what they want, and to keep certain things on the down low that should be brought into the light.

That’s where Chappelle’s speech tends to intersect with the Weinstein issue of today. As many have suspected and many now know from the Weinstein affair there are indeed things going on Hollywood that too many people have turned a blind eye to. The abuse of power, the influence that is used to coerce people into doing things so that they might keep their job, and the idea that no one has ever said anything until now is simply appalling. That someone in Weinstein’s position would use their power for such heinous gain is enough to make a person start to lose faith in the industry and wonder just how far the rot goes.

Chapelle went on to talk about Martin Lawrence’s breakdown in 1997 when he was seen venturing out into traffic telling people that “they’re trying to kill me!”. The ‘they’ he was talking about were supposedly the clandestine group known as the Illuminati, a group that are said to be a cabal of ne’re-do wells that might even be satanic in origin. The only break in this theory is that a lot of prominent celebrities are apparently a part of this group, which might be why it seems like such a ridiculous theory. Of course that only strengthens the idea that it does exist since creating an image that is self-defeating seems to be in the best interest of such a group. If you don’t believe they exist then they can go on doing what they’ve been doing without any real suspicion being thrown their way.

But throw in a person that’s ready to out one of their members, because let’s face it, Weinstein would be a prime candidate, and they’ll either circle the wagons or do their best to insure that the ousted member is removed from their presence. Is it really any wonder that no one has been coming to Weinstein’s defense? People are pulling away from him as though he contracted leprosy overnight, and even his lawyer and wife have decided that he’s not worth the risk.  A LAWYER is backing out of a case people. How often does that kind of thing happen? Normally you’d hear about how his defense is standing firmly against all accusations, but as the days continue forward, Harvey is looking like he’s all alone in the world.

It’s cold out there when you’re by yourself, isn’t it?