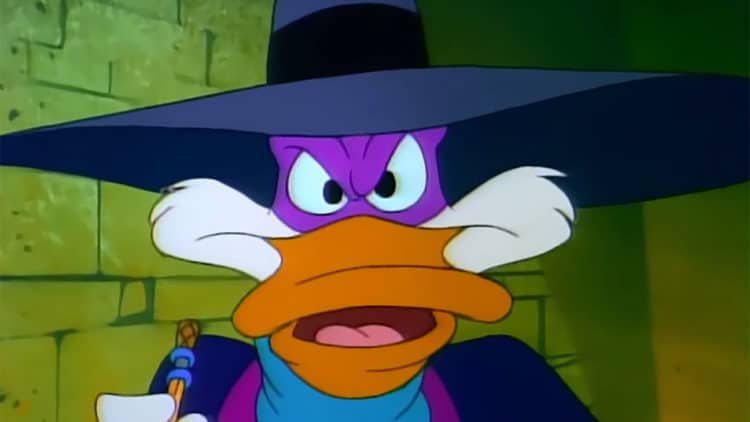 In the 1990s, Disney created a show called Darkwing Duck, which may or may not have been set in the same universe as the even better-known DuckTales. For those who are curious, Darkwing Duck was centered on the titular character, who was the superhero alterego of a normal, suburb-dwelling duck named Drake Mallard. On the whole, Darkwing Duck was a very affectionate parody of the superhero genre as a whole, which makes it no wonder that interested individuals have speculated about it returning to the TV screen in recent times. Speculation that turned out to have been neither wholly true nor wholly false. Here are 10 things that you may or may not have known about Darkwing Duck:

Darkwing Duck isn’t a parody of a single superhero. Instead, he and his series take inspiration from a wide range of sources, thus making for something new in the process. However, chances are good that Batman is one of the most recognizable sources in the mix for most people out there. After all, one of Darkwing Duck’s most famous titles is the Duck Knight, which is a clear reference to Batman’s title of the Dark Knight. Moreover, he is fond of using fear tactics, though in his case, they aren’t what anyone would call very effective.

2. Parody of the Shadow

With that said, it is important to note that Darkwing Duck isn’t a parody of Batman in particular so much as a parody of the kind of superhero that is now best represented by Batman. For proof, consider the fact that the character also takes huge inspiration from the Shadow, who came into existence in the 1930s but has faded to a considerable extent in the present time. Darkwing Duck’s civilian name Drake Mallard is a reference to the Shadow’s Kent Allard, while his costume is based on that of the Shadow’s as well.

There are those who would make the argument that the greatest heroes are defined by their greatest flaws. If so, there can be no doubt about the fact that Darkwing Duck’s greatest flaw is his immense ego, which drives him in a number of directions. For example, his ego causes him to crave the spotlight. Likewise, his ego has been known to alienate his allies as well as cause him to underestimate his enemies.

Some fans have been known to describe Darkwing Duck as someone with a Napoelon complex. This is because Darkwing Duck is one of the shortest adult characters in the show, though he more than makes up for it with a big presence built on bombastic bravado. With that said, the real Napoleon was of average height, while the popular perception of the man in the English-speaking world was rooted in the fact that the French used a longer inch than the British in those times.

Speaking of which, while there are some superhero parodies that are bumblers through and through, Darkwing Duck isn’t one of them. Yes, he has his moments. However, when Darkwing Duck takes things seriously, he is one of the most capable members of the cast. Something that enables him to stand against superpowered enemies alongside superpowered allies while not being superpowered himself.

6. Has More Than One Candidate For Archenemy

Darkwing Duck is very fond of the term “arch-enemy,” presumably because it makes things sound more dramatic than they actually are. However, there are a couple of characters who could be considered his archenemies. One would be Megavolt, who picked up superpowers as well as probable brain damage because of a high school bullying incident. The other would be Negaduck.

There are two characters called Negaduck. The first Negaduck was created when one of Megavolt’s inventions split Darkwing Duck into two, with one being Negaduck and the other being Posiduck. Meanwhile, the second Negaduck is the counterpart of Darkwing Duck from a mirror universe, who was created because his predecessor proved to be very popular. On the whole, the second Negaduck has proven to be very popular as well, thus contributing much to his archenemy status.

8. There Are Justice Ducks

9. Is and Isn’t Real on Ducktales

10. The Episode Threw a Lot of Shade

The episode in which both Darkwing Duck and Negaduck showed up seemed to have been throwing shade at Zack Snyder, who is regarded in a very negative light by a lot of superhero fans because of what they consider to be excessive darkness in his movies. Besides this, the episode seems to have been throwing shade at the idea of just doing whatever appeals the most to the audience as well, seeing as how Dewey makes just as much of a mess when entrusted with the movie’s overall direction as Alistair Boorswan, who is the presumed Zack Snyder stand-in.