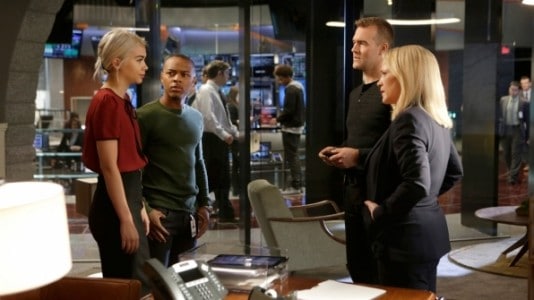 I get that Python wanted to get under Deputy Director Ryan’s skin by sending the live web video link to where Grace was being held captive, but did he have to channel his inner Riddler? Couldn’t he just take over CTOC with the surge protector that was missed when every wire, cable, charger and device was being replaced like he did during the episode and have Team Cyber scramble around trying to kick him out of the system as well as trying to find and save Grace? I get that the various riddles are designed to buy time for Grace and revealed parts of Python’s mother’s past, but it’s kind of an unnecessary add-on in my opinion. Though the “Let the games begin” code message was pretty cool, I couldn’t figure it out until I saw all the letters of the sentence.

The scene where Deputy Director Ryan told Grace to keep fighting because it was the young woman’s strength that got the former through her daughter’s unfortunate passing made me tear up a little. Losing a child can be hard for any parent and having to go through that pain again is like pouring salt on the wound. I’m glad that Grace was able to stay conscious with renewed courage until Deputy Director Ryan can figure out where she is.

When it was revealed that Agent Vega had gone rogue, it made me think that he has something to do with killing Python’s mother, but it turns out that the former Interpol agent was being framed by Python given that Agent Vega wanted to hunt down Python so badly to exact revenge on the cyber criminal for brutally torturing and killing his partner Agent Flemming that he quit his job in order to achieve his goal. Good thing Agent Mundo was there to reign the former Interpol agent in, courtesy of Deputy Director Ryan, as they tracked down Python and rescue Grace.

When Python drove up past Agent Vega and Agent Mundo’s car with an arrogant smirk on his face, I half expected Agent Vega to turn the car around and chase down Python and bring him to justice, but Agent Mundo convinced him that saving Grace is far more important right now than going after the cyber criminal. There’s always time for that after a life has been saved. I could tell that Agent Vega really wanted to go after Python, but he relented and told Agent Mundo to call it in so that Python can be captured as the two headed toward the abandoned medical center where Python’s mother was born in and rescued Grace after reviving her from her unconscious state.

Later that night, D.B informed Deputy Director Ryan that her protection detail is stationed outside her apartment and he will return tomorrow to help her unpack everything. I’m curious to find out what D.B’s famous lasagna will taste like? Also, when the camera closed in on Deputy Director Ryan’s glass of wine, it made me think that it might have been spiked with a sedative, I was proven to be mistaken given that moments after she closed her eyes, the Deputy Director woke to silenced gunshots and came face to face with Python himself, who taunted the Deputy Director that either she dies or he will haunt her dreams forever. Deputy Director Ryan, having enough of Python’s games, shot the cyber criminal and ended his miserable existence. Score one for the Deputy Director.

This episode of CSI: Cyber was alright apart from the riddles that Team Cyber had to solve in order to save Grace from Python’s clutches. I liked the scene where Nelson complimented Agent Krumitz that he remained calm under pressure while getting CTOC back online and being a loyal basketball fan, I appreciated the awesome basketball moment metaphors from Agent Krumitz, Nelson and Raven.

The FBI’s most wanted Cybercriminal returns to exact revenge as Team Cyber rushes to save Grace in this week’s great episode of CSI: Cyber.