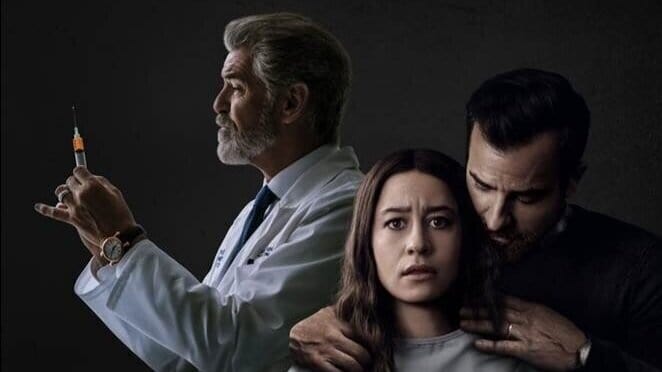 Pregnancy is one of the many things that a person has to go through, or be close to, in order to really understand what it’s all about. One can read books, watch documentaries, movies, shows, anything having to do with pregnancy, but until they go through it, they have no real idea what it’s about. For the man, it’s about being supportive and learning how to care for his companion, and also learning how to anticipate their needs and wants. For the woman, well, it varies. False Positive shouldn’t scare anyone from becoming pregnant since the horror movie is something that’s beyond the norm as Dr. Hindle is definitely up to something as he charms his way into the lives of his two patients by trying to help them conceive and then birth a child. But when the mother starts seeing things that she knows can’t be real she begins to suspect the doctor and those that work with him of doing something that’s unknown but undoubtedly diabolical in nature. Once she starts experiencing visions she’s almost certain that something is wrong and that the doctor and his people are in on it. One can only imagine what those around her are going to say when it comes to her pregnancy since a lot of people come to the understanding that hormones can make a lot of mothers act in ways that are far out of the norm for their usual behavior. The downside of such a thing is that trying to believe someone is seeing things or is feeling out of sorts when they’re pregnant is often chalked up to a chemical imbalance in the brain that might be causing the condition. Not everyone will blame such things on a pregnancy, and in part, this is why paying attention to one’s partner is so important. But in this case, it feels as though most of those around the mother are going to insist that everything is just fine, which is horrifying in itself.

Again, any movie, particularly horror movies, that deal with pregnancies should be taken as they are and not as a running commentary on being pregnant. Obviously, some folks are adamant about never having kids for their own reasons, and horror movies might only strengthen that feeling. But pregnancies in horror movies are often something that ends up being absolutely terrifying if the story is focused on the pregnancy. There have been plenty of movies that do focus on pregnant women since there is something alluring about this subject in that it invites plenty of disturbing ideas that end up becoming movies, TV shows, and stories that are essentially too disturbing to really think about, but are also great for horror since it’s a part of stripping the innocence from an act that is absolutely necessary for the continuation of the species. Bringing a pregnancy into a horror movie is, in a lot of ways, meant to be absolutely disturbing since such movies show that nothing is taboo and nothing is off-limits when it comes to the horrifying experience of losing control, of being at the mercy of someone else. That might make it sound hopeless and diabolical, but the fact is that pregnancy is a subject that can be used in a wide spectrum of genres and isn’t bound to any single one. It’s definitely a touchy subject at times depending on how the story is created and in what direction it will go. But all in all, pregnancy in a horror movie is something that will offer the kind of chills that hit a lot of people in the guts and not let go, especially those that have been through the process of being pregnant and giving birth.

Pierce Brosnan appears to be taking on the role of another villainous antagonist, but it’s less obvious this time around apart from the manner in which he appears to take joy in his job. Brosnan has been appearing more and more lately as he’s taking on the role of Doctor Fate in the upcoming Black Adam movie, and has been seen here and there over the years. To say that he’s a great villain isn’t too hard since he does maintain the type of charming attitude that has made him such a great actor over the years, but when he becomes the type of character that is still charming, witty, and yet definitely diabolical it’s kind of creepy, but effective. People hope and expect to be able to trust their doctor when they seek medical help, but in this case, Brosnan does come off as the type of guy that might make a lot of people uneasy, even if his charm would work on many others. Overall, this does feel like the type of movie that could chill the blood and earn a deserved shudder.