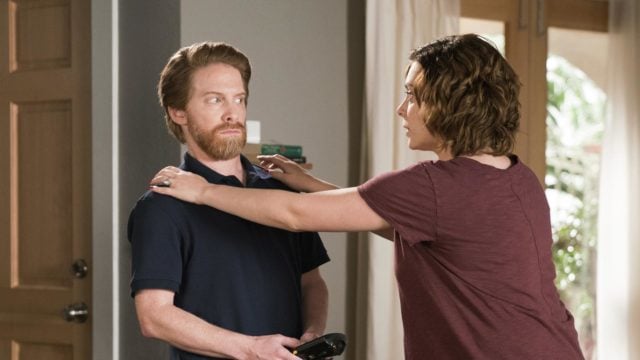 In the Crazy Ex-Girlfriend season two penultimate episode, “Is Josh Free in Two Weeks?,” we’re starting to see the light at the end of the tunnel, or darkness, depending on how you look at it.  Wedding planning is stressful, or so I’ve heard. Wedding planning in two weeks is insane, but then again, this is Rebecca, so what else is to be expected? Plus, it’s stress she put on herself to try and forget her kiss with Nathaniel.

Our very first shot is not of a main character but it is a recognizable face, Seth Green! He’s the package delivery guy, Patrick, who has apparently been making frequent enough visits to be on a first-name basis with Rebecca and giving opinions on wedding dresses, one of which she wears as she answers the door. When he asks why she doesn’t have help, flashbacks reveal she asked her mom for help but Naomi was more concerned about getting waxed and botoxed for the wedding, and felt too guilty to ask Paula when she realized she had law school finals.

So she’s on her own. She looks up tips on Google at HomeBase and reveals to Heather that her Dad didn’t RSVP because he never shows up. Heather unintentionally adds to the stress with the mention of a “DIY wedding,” which Rebecca immediately decides to emulate. Heather tries to warn her she’s biting off more than she can chew, but to no avail, as expected.

Rebecca runs into Valencia awkwardly outside the craft store. Rebecca says she misses Valencia, but V can’t deal yet and walks away.

After a very Josh team prayer and some flirting with the cute girl coach of the church basketball team, Father Brah encourages him to make sure the wedding happens with him not to him.

Nathaniel tries to work done at the office, but keeps thinking about Rebecca. When he comes out of his office, Paula comments on the grossness of his green drink, so he explains that it’s a desperately needed cleanse. He also notes that Rebecca is not in again and comments that she represents his inability to “tighten the ship” and demands she come in after he downs his green drink looking worse for the wear. Rebecca reluctantly comes in. Nathaniel tries to focus the conversation on her work ethic, but can’t help noting how Rebecca moved up her wedding right after they kissed.

Later, Josh comes home to a DIY explosion. He tries to give ideas, but it turns out Rebecca is trying to follow another couple’s DIY wedding exactly, so she rejects them. She tries to involve him, but he just winds up adding another item for her massive to-do list: handmade origami cranes.

Nathaniel holds a meeting, but his loud stomach noises keep interrupting struggling with stomach pains. He then apparently lets out a very foul-smelling fart and lets Mya take the fall.

Rebecca struggles with the origami as Josh fell asleep after making just one. He wakes up to some origami and a stressed-out Rebecca, who busts out a comically long to-do list. Paula stops by, noting the chaos and begs Rebecca to postpone. Paula offers to get a sheet cake from Costco, which Rebecca gratefully accepts, but when Paula leaves goes back to making her picture perfect cake pops.

Nathaniel comes into the office looking truly terrible, but he refuses to admit he’s sick. He tries to get Paula and Mya to leave his office before he shits his pants in front of them, but fails. He refuses help from Paula and rolls himself to the bathroom as the entire office looks on in confusion.

Josh meets up with cute co-coach and vents about Rebecca not liking his idea. She encourages him to go for the “idea” that he shows her on his phone. I see stupid Josh sparks.

Wearing Darryl’s suit, Nathaniel struggles. The guys encourage him to rest and take a nap saying it’s manly. I think this may be the longest before a song, but it’s finally here. Darryl and the other guys sing as an 80s hair band to “Man Nap.”

Heather shows up at Valencia’s apartment to get some peace from the wedding planning madness. V claims not to be mad, but admits she having a whole future planned with Josh and now she feels a little lost with out it.

Seth Green (aka Patrick) is back at Rebecca’s place and she’s bugging out even more, especially when she gets a No RSVP from her Dad. She begs Patrick not to leave, admits she kissed Nathaniel, and emphasizes her desperate need to be normal. She sings “(Tell Me I’m Okay) Patrick,” hoping to get validation that she’s normal and doing the right thing. She promptly falls asleep and he covers her up with one of the wedding dresses lying around.

Of course it’s time for Nathaniel’s dad to show up while he’s napping. Paula and Darryl try to steer him away from Nathaniel’s office, but obviously fail. He berates Nathaniel for his weakness and walks out. Nathaniel collapses in sadness, demanding the office not pity him.

Valencia and Heather show up at Heather and Rebecca’s place for V to see the chaos and a sleeping Rebecca. Rebecca awakes and admits defeat, deciding to give up on the wedding. So she goes to work, which surprises Nathaniel. She tells him her father’s not coming, which clearly upsets him. Valencia shows up with the wedding binder she had for her and Josh to give to Rebecca, but struggles to let it go. Instead she decides to do the wedding for Rebecca. Who wants to bet that Valencia’s going to be a wedding planner next season?

At the office, Patrick informs Paula (who he somehow knows now) of Rebecca’s struggles. He’s delivering a package from Rebecca’s mother: a wedding dress. Turns out Paula called her and screamed at her for being a bad mother, demanding she go buy Rebecca a dress. They have a fitting back at the house and Rebecca feels truly touched when Heather says she actually looks “normal.” Next up on V’s strict schedule is Rebecca’s wedding shower.

Another day (presumably), Nathaniel comes in to the conference room yelling at Rebecca about a brief. It turns out he’s surprising her with her dad that he picked up on his private plane. Valencia sets up a website (kind of unnecessary with the wedding so close but whatever). It’s got an adorable pic of Josh and Rebecca front and center. But, uh oh, looks like stalker Trent saw it. Guess we know one of the obstacles coming in the season finale/wedding.

In the latest episode of Crazy Ex-Girlfriend, Rebecca struggles to plan a wedding in only two weeks.