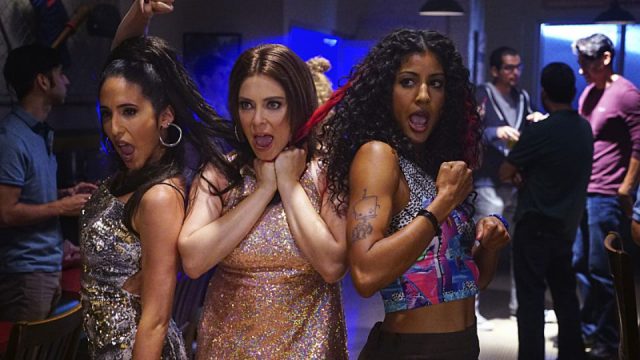 The previous episode of Crazy Ex-Girlfriend clearly set up a lot of things for episode 5, “Who Needs Josh When You Have a Girl Group?,” but not all of them. If it wasn’t for the “previously on” segment I never would have predicted that they’d bring back Trent. You know, the guy who’s even more obsessed with Rebecca than she is with Josh. Even still, I was surprised when a mysterious person buying $10k of surfing accouterment turned out to be him. You see he’s planning to infiltrate Josh’s friend group in a “42-point Bunch inception plan.”

Hector and WJ mock Josh for basically  having a new girlfriend already while they wait in line at Homebase. They’re shocked to find there’s a $50-100 cover charge so they leave, sadly. Rebecca and Valencia come out of the bathroom giggling about how much fun peeing together is. Valencia does politely request that Rebecca poop with the door closed (unsurprisingly Rebecca talks about poop a lot). Heather comes over with drinks and sits down, obviously. She’s a worse restaurant employee than Rachel from Friends.

They discuss how their new squad status. None of them have really ever had girl groups before. Heather observes it’s because studies show women are indirect communicators and she’s too direct. When Valencia and Heather discuss how Valencia’s real first name is Maria, Rebecca starts daydreaming into our first song break. “Friendtopia” is a nod to Spice Girls, complete with horrendous British accents and sparkly mini dresses. While supposedly celebrating girlfriends the lyrics essentially seem to mock squads and basic bitches (PSLs and all).

The next day at the office Darryl points out that the selfie she posted with her “gurl group” may make Paula (and definitely him) feel left out. Rebecca looks at a Paula, declares her super depressed and decides to find a way to make her two different sets of friends spontaneously hang out. She wants to make it one large friend group. Her gross co-worker, Karen, the one who really liked douches, suggests a sex toy party.

Trent walks into the back of Aloha Tech in what can only be described as his “surfer dude costume.” Josh jumps out of a box of packaging popcorn (to scare his boss of course). Trent asks about the bathroom. Josh recognizes him as Rebecca’s “old boyfriend.” Trent makes up an excuse for being in town while dropping a lot of gross bro words and invites Josh and his friends to Homebase. He’s gotten rid of the cover charge issue saying he already bought a table for clients on his expense account. He’s not the best actor (Trent, not Paul Welch, Paul Welch is amazing), but he is a smooth operator with this creepy stuff.

Back at Whitefeather and Associates, Rebecca invites Paula to see her new house. Paula politely declines because of a big test coming up, but Rebecca pulls at the heartstrings about wanting Paula to be in her life so she agrees. Little does she know it’s going to include the “gurl” group and a sex toy party. Thankfully, Rebecca was smart enough to make sure Karen knows she’s not invited. Later, Paula and Sunil study at her house and he procrastinates studying by critiquing Paula for her acceptance of Rebecca’s ways.

Rebecca shows Paula her new place, which looks real nice. Rebecca doesn’t seem to be spending as ridiculously as it might appear because there actually were a ton of murders there. A light tap reveals some graffiti underneath the paint. Paula excitedly chats with Rebecca when Valencia and Heather show up. They have“gurl group” T-shirts and didn’t know Paula was coming either. Paula sighs in realization.

Trent does his version of the “Sexy Getting Ready Song,” but it ends abruptly when he cuts himself trying to shave his back. Not sure I understood that joke but loved to throwback to the pilot. Trent’s rehearsing the bro hug at Homebase when Josh, WJ and Hector show up. He slips up and calls WJ and Hector by name without having been introduced. He reasonably explains knowing WJ (i.e. he looks like a white version of Josh), but for Hector he just says he’s racist. Okay, I take back what I said about him being smooth.

They make a ratchet version of the girl group T-shirts for Paula while Rebecca begs her to just give the situation a chance. Her patience quickly wearing thin, Paula doesn’t fit into their traditional selfie pose so she takes a quick one (from a low angle, gasp!).

I think Maya the intern is around solely so that Darryl has someone to be mean to. They both feel depressed about the newest girl group photo. She convinces him to team up so they can force their way to the party.

Back at Rebecca and Heather’s place, forced bonding isn’t going well. The doorbell rings and as I had suspected/worried, Angelique the sex toy part host is Karen in a wig and pleather bodysuit.

Okay, now I completely take back what I said about Trent being smooth. He just literally repeats what the guys say as they watch the game (including when Hector says “I’m hungry”). When he goes to get four chicken wings (Trent you’ve been outside before right?), Hector and WJ discuss his strange behavior. Josh is too distracted by texts from Anna to notice though.

Daryl and Maya use the conference room to plot. Daryl assures her there are no bad ideas but when she suggests pineapple he yells at her.

During Angelique’s bizarre sex toy demonstration, Paula goes to the bathroom. In her absence, Rebecca expresses her concern Paula isn’t having fun or blending into the group. When Heather points out that Paula doesn’t want to be in the group, Rebecca ignores it. Paula yells for help as the bathroom door gets stuck; when Rebecca Spice Girl kicks the door open, a bunch of crap falls from the ceiling, barricading Paula in the bathroom. This leads to the next (sort of) song break, “Stuck in the Bathroom.” There’s an intertitle and everything. Heather sing talks the scenario: each one tries to get Paula out but fails and they finally remember to call 911.

After Trent suggests a bro trip and matching chicken wing jackets at Homebase, WJ and Hector decide it’s time to go. Josh is distracted because Anna called him “boo” but runs off as well, leaving Trent devastated.

When Rebecca offers to text Scott from Paula’s phone to let him know what’s going on but Paula protests. Thus revealing there’s obviously something on her phone she doesn’t want Rebecca to see. Rebecca sees it’s bitchy texts to Sunil. She tells Paula she was agonizing whether Paula felt like she had been replaced when really Rebecca was the one who was replaced.

Sitting by himself, Trent sees the girl from the surf shop. When she finds out his whole forced friendship was for love, she totally changes her tune and says forcing love is romantic and tells Trent to go to his love.

Sunil shows up with a poor excuse to get Paula out (not knowing about the bathroom incident). Paula tries to apologize, but Rebecca says once the fireman gets her out she never has to deal with Rebecca again.

Meanwhile, Maya and Darryl still haven’t come up with a plan. Maya gives up and confronts Daryl about his treatment of her. He admits it’s because she reminds him of his worst qualities.

Sunil can’t get Paula out either. When they think the firemen have finally arrived it’s actually Trent. He runs in and sweeps Rebecca offer her feet, which impresses her. but she makes him put her down. He is able to get Paula out, but Paula questions why he’s there in the first place. She stops herself and decides to leave. Rebecca stops her and they have it out with Paula finally saying everything she should and noting Rebecca moved on from her first. When Rebecca says that Paula never gives her the opportunity, Paula exclaims that she shouldn’t have to. Again the doorbell rings and they think it’s the firemen, but this time it’s Daryl and Maya with a coordinated dance.

Trent comes by Rebecca’s bedroom to say goodbye and apologizes for trying to force things. He also hacked her texts and e-mails. Instead of demanding he leave like a logical person, Rebecca proposes sex to get her mind off things.

Daryl and Maya’s dance impresses the whole office, with some asking questions about the choreography. The video’s gotten a whopping 1000 views and Daryl names the dance the Maya. Afterward Paula and Rebecca pass each other in the office without speaking though looking at each other wistfully.

Then we flashback to Rebecca’s romp with Trent. She compliments and thanks him, but he thanks her for taking his virginity (kind of surprising, but not really). Rebecca’s repulsed at first but when he asks if she “wants to take it again,” she agrees. She pushes his head down though and reminds him he has to pay the toll first (his “favorite part”).

In the 12/2 episode of Crazy Ex-Girlfriend, Rebecca tries to force Paula into her new girl group with Heather and Valencia, while Trent plots to infiltrate the guys’ group in order to eventually win Rebecca’s love.