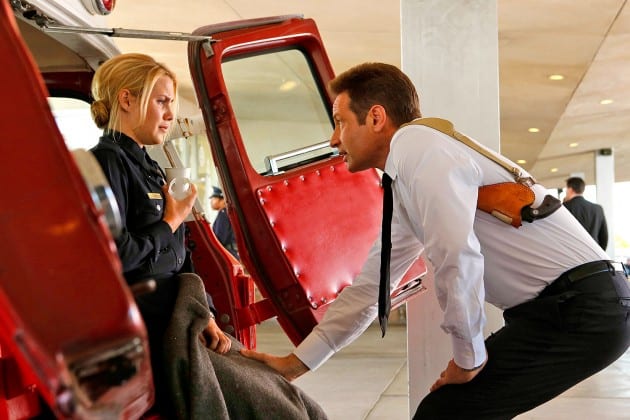 We’ve hit the home stretch on the first season of NBC’s Aquarius, so let’s see how things continue to play out with the ninth episode, “Why?” As usual, this review will be kept somewhat spoiler-lite.

The episode opens with the department decorating for the Christmas holidays as Sam, Brian, and Ed deal with the aftermath of what Shafe witnessed at the end of the previous episode. Brian doesn’t like any of the options that he’s left with, but he convinces his informant to keep doing what he’s doing.

Meanwhile, Ken Karn meets with Charlie to talk about the way that he’s covering his tracks to try and get Manson off his back, and the audience manages to learn a little bit more about the bad things that Ken has gotten himself involved in over his lifetime. It’s interesting how the show has managed to incorporate a completely fictional character so deeply in the Charles Manson mythology, and it’s even more interesting how well this has worked.

During this time, Sam continues his investigation into Louise Mitchell, and he learns that the prostitute had a son that he didn’t know about. I know that I mentioned this in a previous review, but I do really like the way that Aquarius, after a string of “cases-of-the-week,” has brought the main story back around into the forefront. Before, I thought that the show worked best when it kept a big separation between Hodiak and Manson, but I’ve realized now that it works just as well when there’s a mixture of elements.

The main story in “Why?” deals with the murder of one of the department’s own, which is witnessed by Charmaine. Because of this, we get the chance to see Claire Holt give her best performance so far on the show. This actress is able to pull off any material that she’s been given, and we’re so lucky to get the chance to witness it. We also got the return of Gaius Charles’s Bunchy Carter, which is always a joy to see. I like when we see historical figures thrown into the mix on a fictional show like Aquarius.

I feel like I’ve been saying the same thing in a lot of these reviews of Aquarius, but I’m just so impressed with this show as a whole. I was excited when it was first announced. However, it’s one thing to be excited about a show before you see it, and an entirely different thing when a series that is completely different than what you expected continues being excited this late into the season. All of the cases so far have been interesting, the cast is just firing on all cylinders, and I couldn’t be happier that we’re getting the chance to see this as it airs instead of having to look back years later and wonder why nobody watched. Luckily, Aquarius has already been renewed for a second season, so we just get to sit back and enjoy how events play out through the end.

What are your thoughts on Aquarius as we head toward the end? Let us know below!