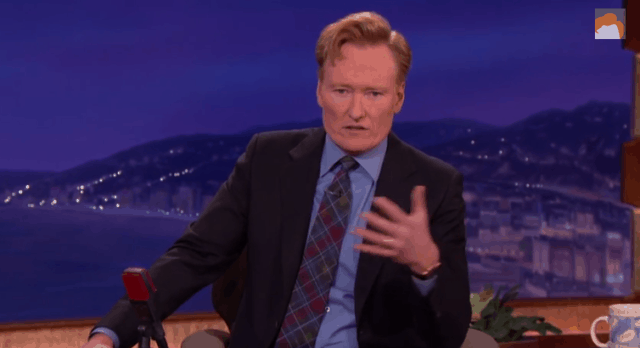 The degree of plagiarism that goes on in comedy isn’t the easy thing to detect or even prove.   Comedians are altering punchlines and jokes from other comedians all the time so when a case comes up that could actually hold water and against a very successful late night host no less, it’s something to pay attention to.

Comedy writer Robert “Alex” Kaseberg, who takes credit for thousands of jokes used by Jay Leno and whose material has appeared in The New York Times and The Washington Post, is suing Conan O’Brien for copyright infringement on five of his jokes from December 2014 to June 2015, the Hollywood Reporter reports.

Normally this wouldn’t be huge news but look at the jokes and then look at what Conan’s lines were:

“Tom Brady said he wants to give his MVP truck to the man who won the game for the Patriots. So enjoy that truck, Pete Carroll.”

O’Brien said on his show (later that night): “Tom Brady said he wants to give the truck that he was given as Super Bowl MVP . . . to the guy who won the Super Bowl for the Patriots. Which is very nice. I think that’s nice. I do. Yes. So Brady’s giving his truck to Seahawks coach Pete Carroll.”

Kaseberg tweeted on Feb. 17. 2016: “The Washington Monument is ten inches shorter than previously thought. You know the winter has been cold when a monument suffers from shrinkage.”

O’Brien’s joke (later that day): “Yesterday, surveyors announced that the Washington Monument is ten inches shorter than what’s been recorded. Yeah! Of course the monument’s blaming the shrinkage on the cold weather. That’s a penis joke.”

Kaseberg’s tweet, June 9, 2015: “Three streets named Bruce Jenner might have to change names. And one could go from a cul-de-sac to cul-de-sackless.”

O’Brien’s joke (later that night): “Some cities that have streets named after Bruce Jenner are trying to change the streets’ names to Caitlyn Jenner. And if you live on Bruce Jenner Cul-de-Sac, it will now be called a Cul-de-No-Sac.”

In a deposition in the case, O’Brien spoke about the allegations.

“Accusing a comedian of stealing a joke is the worst thing you can accuse them of, in my opinion, short of murder,” he said. “I think it’s absolutely terrible.”

Hmmm, but does Conan practice what he preaches?  We’ll keep you posted.