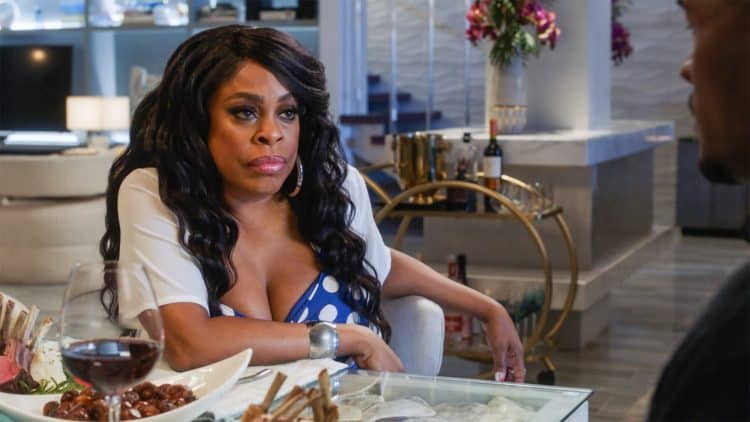 Everyone was too busy caught up in their own problems to realize that the biggest traitor of them all had already infiltrated their group and acquired more than enough information to send the whole crew to prison for life. Desna is near hysterical after finding out that Tony was a DEA agent at the end of Claws Season 4, Episode 7.

“I Will Take The Fall”

Desna breaks the news to the girls that Tony is a DEA agent and that they can no longer trust him. Of course, he can’t find out that they know the truth at least not without a plan in motion. Desna feels extremely guilty and she makes it clear that whatever happens she’s going to take the fall for everything. Although Desna has been pretty unbearable over the last few weeks, I have to admit she’s always been about taking care of her people. Virginia reveals that she took care of Georgia for stealing out of their supply just as Desna told her to do. Jenn nearly faints when she hears that Georgia took the fall for her wrongdoing. Like always she copes by taking more Oxy. This time she takes more than her body can handle and ends up overdosing in the bathroom.

Jenn’s overdose brings everyone together momentarily. Even Quiet Ann shows up to show her friend support despite her ongoing duel with Desna. On Claws sweet moments like this don’t last for long. Before you know it the ladies are fighting with each other as they are forced to become accountable for the evil they’ve done over the last few weeks. Now everyone knows that Jenn was the one stealing Oxy from the shop. Virginia is furious when she realizes that she probably killed Georgia for nothing since she was innocent all along. Virginia blames Desna for her death. Desna reminds Virginia that she was the one that blamed Georgia in the first place. Besides, Virginia put her friend at risk when she told her about Sheray’s accidental murder. Everyone starts to blame Desna for the mess they are all in. Even Bryce blames her when he briefly shows up to check on Jenn. On a happier note, Eve thinks that she is pregnant after recently being inseminated. Dean is nervous about becoming a father because of his own insecurities, but he’s finally ready even though he wasn’t when Virginia was pregnant.

Tony brings a lucrative business opportunity to Desna. They meet up with a friend of his that supposedly has connections to the dark web where they can push pills and make load of money. Now that Desna knows they are both cops she turns down the deal for the moment. The only thing left to do is run. Desna devises a plan for the crew to flee, but they’ll need one big score to fund their getaway. She decides to take Tony’s friend up on her offer and they plan to meet up later in the week for the big drop. What Desna doesn’t know is that this drop-off is supposed to lead to her big arrest.

Quiet Ann ends up riding home from the hospital with Desna so that she can retrieve the $100,000 payment that Desna promised. During the ride, Desna owns her mistakes. For a moment, we get a glimpse of the beautiful friendship that Desna and Quiet Ann used to have when Quiet Ann acknowledges that Desna has always been about taking care of everyone. However, when Desna mentions that Tony is a DEA agent, Quiet Ann gets angry all over again. Now if she takes the money, Desna’s actions could fall back on her. Running away is not in the cards anymore because if it’s one thing we know about the Feds is that they’ll find you wherever you are.

Tony approaches Quiet Ann as a DEA agent with his partner offering a full immunity deal. In exchange, Quiet Ann will have to provide full intelligence on how both Desna’s and Uncle Daddy’s operations work. Quiet Ann doesn’t hesitate to take the deal. By taking the deal, Quiet Ann will be betraying the other ladies as well. As a soon-to-be mom, she has her baby to worry which is why she probably decided to save herself and take the deal. Will Quiet Ann actually go through with snitching? Or is it just a ploy to buy time to come up with a better plan? Running is not a realistic solution so how ill the ladies at Claws get themselves out of this jam?