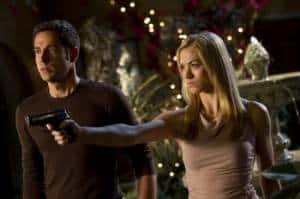 It’s been a long, long time since we last checked-in on our favorite accidental spy, so catch up with my most recent recap here.

The episode begins in the Loire Valley in France. A man runs with the ubiquitous silver briefcase through the grounds of a chateau, and is being chased by dogs and men with guns. He finds a door, rushes through and finds himself in a wine cellar. He opens the case. There is a syringe inside which he removes to inject himself. Before he does, he decides to plunge the needle into a wine bottle instead. When he depresses the plunger, a microchip is shot into the wine. The pursuers break in and shoot the man in the back. With his dying breaths, the man slides the empty syringe under the wine racks. The gunmen come upon and open the silver case, seeing that the syringe is missing. Their leader orders his men to seek out the syringe, but the police have arrived, so they’ll have to come back for the chip. As the camera zooms in on the bottle of Chateau LaFranc that now contains the chip…

…Chuck and Sarah share wine during a romantic dinner. Sarah asks Chuck if he’s OK because he seems nervous. No, not at all, he replies. Is he worried about his mother? No, it’s not that either. He has realized that he hasn’t been thinking about the two of them as a couple. He’s been more worried about about things he can’t control, when he should be thinking about things he can, like the two of them. Chuck takes out an engagement ring, but hides it below the table. He is about to propose. Before he can, however, Sarah relates to him the bad history of proposals in her family. Her parents went to a romantic Italian restaurant (like the one she and Chuck are at right now), and had champagne, flowers, candles the whole nine. But the candles caught the rug on fire and set the restaurant ablaze. Her family got out with minor burns, but they took it as a sign for their relationship — a relationship that ended in ruins. So, there’s no need to rush; they can take their time. If Chuck was nervous before, he’s practically catatonic now, as evidence by his hand shaking like a leaf. He clicks the case closed and makes an excuse to leave the table, hiding the ring along the way.

Chuck hustles outside and finds Morgan waiting with balloons and a horse and carriage. “We’ve gotta shut it down,” Chuck warns. Shut it down? Morgan has already has the string quartet, caballos, and champagne on the way! Hearing this, Chuck rushes back into the restaurant to intercept the romantic gestures. He gives the champagne to another dining couple, and ushers out the quartet. When Chuck returns to Sarah, she tells him that General Beckman just called so they have to leave. This is welcome news to Chuck, so he ushers her out the side exit to avoid Morgan and perhaps the worst possible marriage proposal ever.

At Castle, General Beckman tells Chuck and Sarah about the chip (it’s actually a nanochip that can be implanted into a person to hide its transportation), which contains blueprints and plans for CIA black sites around the world. Casey enters and apologizes for being late; it seems Ventura Boulevard was blocked by some nutcase with a horse and carriage. The General tells them that they are to travel to France to recover the nanochip before Pierre, the man who shot the spy who was carrying the silver briefcase, can get his hands on it. Casey protests that he doesn’t want to go to France, as it is anathema to him. Too bad, the General informs him. Chuck asks if Pierre works for Volkoff, but the General informs him that not every bad guy works for Volkoff (this was a clever exchange by the writers as it allows them to write non-Volkoff stories with greater ease). Chuck and Sarah are posing as a loving couple there to attend a wine tasting at the chateau, which Casey will be Chuck’s personal manservant. Casey grumbles his displeasure at his assigned role as he departs. Chuck tells Sarah that he looks forward to their trip to romantic France, kisses her goodbye and leaves to prepare. Left alone, Sarah calls back General Beckman and tells her that she will do everything she can to bring back Chuck’s mother and eliminate Volkoff. The General takes this under advisement, but tells Sarah that now is not right time to pursue them.

Upstairs at the Buy More, Chuck tells Morgan about his new mission. Moreover, he needs the perfect proposal to wipe Sarah’s past with proposals away. Exactly, Morgan tells Chuck. They’re going to a romantic French chateau for their mission! What Chuck needs is a submission: proposing to Sarah. Chuck disagrees; Morgan knows how bad he is with multitasking. Lester, partially overhearing their conversation, wonders why everyone is obsessed with marriage. He laments to Big Mike that he actually has an arranged marriage. His parents are very traditional and deferential to their culture. But damnit, he lives in the U.S. now. He’s not in Canada anymore! Further, he loves online dating; he’s already had three dates today! His parents, however, are sending his arranged wife to California. Big Mike is sympathetic to Lester’s tale of dating woe, so Lester ropes him into letting his would-be wife down easy.

Chuck, Sarah and Casey suit up for the mission. As they leave Castle, Morgan stops Chuck to arrange for Chuck’s submission. Morgan has scouted potential proposal locations, assuring Chuck that “you can do this!” The spies arrive in the Loire Valley and attend the wine party. They are looking for Pierre, but have seen no sign of him yet. Chuck and Sarah say how this place feels so romantic. They kiss. Sarah steps away to look for Pierre, so Chuck calls Morgan. The Bearded one was so right about the need for the submission. Morgan tells Chuck that his earpiece in his left jacket pocket, and the engagement ring is in the right pocket. Casey approaches and grunts that he wants to get home. Chuck whispers to Morgan that he can’t do anything with Casey around. Morgan reminds his best friend, however, that Casey’s cover is that of manservant to Chuck. “Let him man serve you,” Morgan advises. “Hey there, Jonathan, have you unpacked the lady’s luggage yet?” Chuck inquires of Casey in his posh British accent. When Casey grumbles a threat, Chuck happily reminds him of their covers, and asks Casey to put his slippers out tonight.

Casey exits, as Sarah approaches. Still no sign of Pierre, so they decide to look for the nanochip instead. They are getting no signal in their current location, so they decide to look upstairs. Arriving on an arresting balcony (pun intended for later in the episode), the couple is greeted by a gorgeous view! Chuck radios to Morgan that his submission location is confirmed! Chuck moves to begin his proposal, but he is stopped by Casey who radios from the wine cellar with a signal on the nanochip. Pierre and his henchmen enter the cellar, as well. One of the goons finds the syringe. Pierre licks the needle, and identifies the red substance as the 1986 Chateau LaFranc. He orders his men to find the wine, but their search will be to no avail — the bottle is on the move with a waiter. Casey tells Chuck what wine to be looking for, but Pierre senses someone else is there in the cellar. He orders his men to fan out. “No one leaves here alive.”

Chuck and Sarah run downstairs and get the chip’s signal on the first floor: the bottle is outside. Sarah tells Chuck to get the bottle while she goes to get Casey. On the veranda, Chuck finds that his task will be harder than he thought. Numerous waiters carrying wine mill abiout amongst the guests. Morgan radios to Chuck some information on the Chateau LaFranc. Meanwhile, Sarah is told by Casey that the cellar is crawling with bad guys. Forming a plan, she holsters her gun in her garter, breaks the heel off her shoe, and, pretending she is drunk, stumbles into the cellar. She takes out two of Pierre’s henchmen, and quickly dodges the gunshots of two others. Casey appears from behind some casks of wine and tranqs the two assailants.

Upstairs, Chuck finds the bottle of Chateau LaFranc, but to his chagrin, it is empty! Using the tracking signal, Chuck zeroes in on the chip, currently in the glass of one of the guests. Chuck excuses himself, but tells the gentleman that there is something in his wine. The Frenchman is appalled and Chuck’s insolence. He has been waiting two decades for this particular vintage. This is no Two Buck Chuck!! Chuck, himself, is a bit offended by that remark. He finds Two Buck Chuck to offer a great bang for your buck. As teh Frenchman becomes snottier, Chuck warns him of the danger in becoming a walking cliche. Before the Frenchman can explode with anger, Chuck grabs his wine and runs off. He is stopped by Pierre’s pursuit. Pierre orders Chuck to give him the wine and shows him his gun. When Chuck sees the gun, he flashes his Chuck Fu. Without spilling a drop of wine, Chuck kicks Pierre and his goon’s asses.