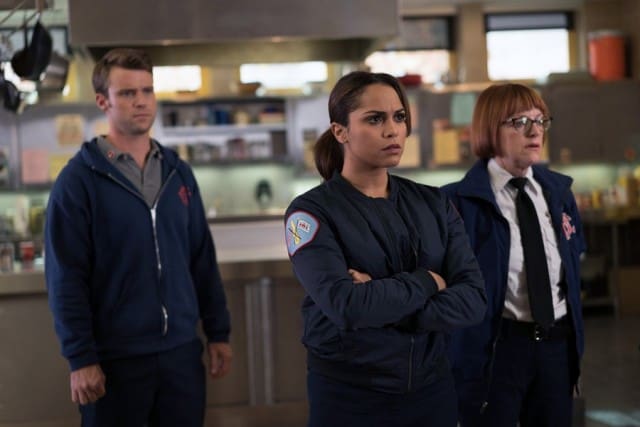 It’s been an awful couple of months on Chicago Fire. Firehouse 51 has been targeted for months, and now the time has come for a final showdown where one key character must finally take a side.

Donna has to put up her house as collateral to get Boden out of jail. He takes the time to be with his family and won’t take any calls from his firehouse family. In the meantime, Patterson is temporarily promoted to Battalion Chief of Firehouse 51. Riddle gives a good speech about all of them being united, but it’s easy to see he’s overjoyed at this turn of events. Everyone is beyond disgusted at Patterson’s temporary promotion, including this writer. I think Patterson actually believes what he is selling as he tries to play both sides.

The pressure is on for everyone to keep their cool now, but Dawson is feeling particularly furious. She completely loses it when on a call she is harassed by a bystander, which is caught on camera and later broadcast. So now not only is the conspiracy aimed at Boden, it’s aimed at everyone in 51. Not only that, the arson investigator Dawson worked with is also being targeted. Since all bets are off now, it’s time for Firehouse 51 to use whatever resources they can to save themselves. Dawson goes to Boden and offers him beer, inspiration, and the knowledge that Intelligence will be looking for Boden’s accuser Serena on their own time. Severide knows that the one person who can help is Jamie, but she still won’t since she could be disbarred for revealing information on Maddox. She can’t formally help Severide; however, she give a subtle tip. Intelligence finds Serena, and faced with jail time, she confesses to everything. From there, it’s easy to connect everything back to Maddox. The charges against Boden are officially dropped, and he is reinstated as Battalion Chief.

Before Boden’s return, Patterson makes several bad calls. Among Patterson’s many horrible calls include telling Cruz Freddie can’t come by the house anymore. Herman and Otis overhear this and help out by offering Freddie a job at Molly’s. Second big mistake Patterson makes is telling Connie she can’t make her handmade ornaments for underprivileged kids in the house. Again, Herman and Otis come to the rescue. They gather the rest of the house to help secretly make the ornaments while Patterson is preoccupied with paperwork. When Patterson does find out, Casey has had enough and sticks up for the house’s right to do something good. Then again they might have wanted to not choose that particular fight since they later find out that Connie actually sells the ornaments, which means she just got a lot of free labor.

Members of squad and truck have to put everything on the line when a container with liquid hydrogen is about to explode in the middle of town. Patterson thinks on his feet as he steals a pickup, loads the container onto it, and leads his men to drive it out of heavily populated areas. They are all barely able to jump from the truck before it explodes. Later, when news crews show up to cover the story, Patterson makes his final stand. He uses his platform to send out a message of support and credit to Boden. What’s more, Patterson goes over Riddle to the Commissioner to be transferred so that Boden can have his house back. Riddle says Patterson will regret aligning himself with Boden, but we later learn that Riddle is the one being transferred while Patterson is getting a promotion.

A loose storylinem which will hopefully now wrap up, is Otis still crushing on Brett. He goes so far as to investigate her new date, who actually comes clean about some parts of his past. Otis needs a nice girl, but it’s not Brett, so let’s move on.

There have been several in-house romances, and goodness knows Casey and Dawson bent a few rules in their courtship, but Jimmy and Chili are crossing some lines. First, they are late to a shift meeting, then Casey sees them being a bit too unprofessional in the workplace. Casey warns Jimmy that they all need to keep their heads down, but Chili doesn’t get the message. She instead continues to push the boundaries and giggle about it. What is going on with this girl? Was she always this unprofessional and nobody realized it?

The good guys won in this episode, so you know it was too much to hope for a simple happy ending. As the rest of the house is celebrating the restoration of the universe as it was, Herman is brutally stabbed in the Molly’s storeroom by Freddie over a petty joke. We’ll learn his fate after the holidays.

Were you shocked by that last minute twist?