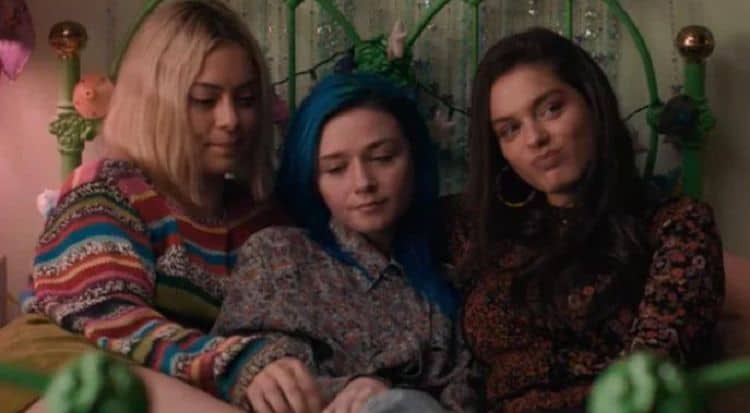 Is anyone else just shaking their head right now, wondering how we were suddenly transported back to the 90s? Seriously, apart from the fact that MTV still had at least some music left on the station back in that decade, Pink Skies Ahead feels as though it’s catapulted society back into the past, which it has since the story takes place in 1998. A lot of us still remember those days, right? Angsty teenagers that don’t know what to do with their lives, people suffering severe family issues that they can’t figure out how to move past or resolve, and various other parts of the trailer that make it obvious that when a teenager feels caged within their own life that it’s the absolute worst thing in the world and there appears to be no hope. Honestly, we did all this decades ago so it’s easy to recall those days, and every generation has been doing their own version of it since, and somehow, no one has come up with a way to simply feel good about themselves on a massive scale, other than through drugs and therapy, which don’t have a one hundred percent track record since they still rely heavily on the person that has to try and get a handle on their own life in some fashion that won’t lead to a total meltdown. Maybe it’s a part of getting older, but even if it is then it has to do with reaching a certain age at which one can look back and realize that yes, a lot of us were very immature back in the day and didn’t know how to handle it, and yes, we probably did things and said things that felt accurate and needed at the time, but were essentially pretty stupid. We made our parents worry, we were self-centered, we blah, blah, blah. The unspoken experiment in teenage angst is still going on at this point since whether any of us like it or not, teens and young adults are bound to realize that growing up does indeed suck sometimes, especially if you’re not willing to do the work to get through the initial stages.

It would be a joy to say that this movie is bound to be a learning experience for a lot of younger people but in all honesty, it’s a hope that people will look at it more as a cautionary tale as to what life will be like if one can’t find a way to pull it together and utilize the resources they have on hand to make it happen. Too many younger individuals have such heavy expectations of what life will be like when they’re out of their parent’s home, when they’re on their own, when they’re in college, and so on and so forth, that they forget anything and everything their parents might have told them while growing up. The truth is that growing up is VERY hard sometimes. There are plenty of folks that will be able to navigate the pitfalls and enjoy the triumphs while learning to get through the hard times, but typically these are the people that look forward and then move in that direction, not those that feel the need to complain and gripe about everything and somehow find a way to drag themselves through life by claiming that nothing is meeting their expectations.

There’s definitely some comedy to be had in the movie even if it’s not intentional since many of us that have been there and gone through hard times in our lives will likely watch this and be able to empathize or sympathize, or both, with the young woman whose life is apparently so hard that she had to leave college and move back with her parents. Yes, a lot of us have been there, and a lot of us have experienced very disorienting times in our lives when we don’t know if we’re going or coming or if up is down and right is left and vice versa. Those periods of hopelessness have hit a lot of people, which makes seeing it appear in a movie feel kind of amusing since one has to wonder if the person playing the role has ever felt this and if so then perhaps they know how silly it appears to glorify or even just showcase such moments in a life that doesn’t appear to be that bad considering that there are two parents that appear to care about the main character and she’s not without any prospects when it comes to moving forward. But for one reason or another, and there are many of them no doubt, this type of movie is bound to speak to many individuals that are in their teens and early 20s since it’s something they feel they can relate to, and probably can.