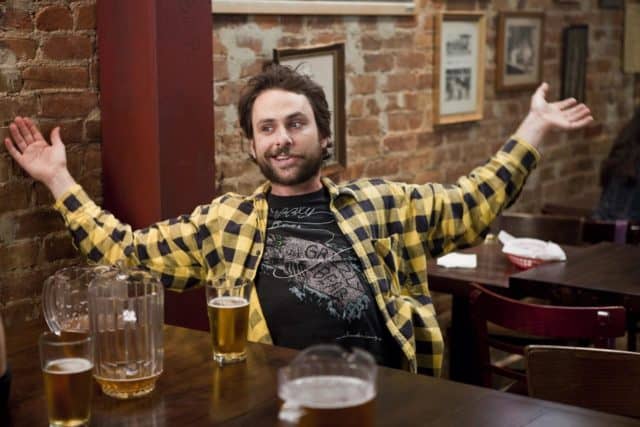 If Charlie Kelly’s illiteracy compilation from “Always” Sunny tells us anything, it is that returning the a world of cave art and emojis may actually be a better alternative than expecting people to learn a language. Charlie manages to take the simplest of words (“Coors” instead of “closed” on the neon sign outside of the tavern) and convert them into a mind-wrenching meaning that would have the ESL 101 student losing sleep at night.

He may be dyslexic, illiterate, or simply a product of the times where U2 is not the name of a rock group but instead means “you too.” Worst of all, he makes himself out to be a writer, which in many cases ends up being a combination of drawings and 5th grade vocabulary intended to convey a message. Forget about an actual sentence. The literally dysfunctional world of Charlie is actually grounded in reality.

A few years ago an experiment was done to see if people could understand words and sentences that had missing letters. Amazingly enough, most people would fill in the blanks automatically, and decipher the intended meaning. Ask yourself how, after watching this 15 minute video compilation, you can reasonably follow the dialogue. The answer is that we all know a Charlie or two ourselves, and really don’t consider them illiterate or dyslexic, just high or confused. Sometimes it’s hard to tell the difference.

The case can be made that Charlie will soon be the norm, and Always Sunny will be looked back at with the thought, “What’s so funny about it?” You can look at Charlie as sad or stupid, but the truth is we all have or Charlie moments. We generally avoid stringing them together to sound like a modern version of Rain Man.

A rule of thumb about languages is that within a culture there will be a major change about every 100 years. Modern versions of classic literature texts from the early 1900’s have been rewritten to make them more readable to the digital natives. Baby boomers complain about the modern generation’s lack of literacy, but they were close to the 1920’s than the upcoming 2020’s. Charlie is of this latter group, so we may have to get used to his banishing of proper English in favor of general communication. Emojis may end up being the preferred method of communication.

In the video, Charlie’s friends can be easily overlooked but actually are crucial to Charlie’s world. They accept his mangling of meaning and structure and prefer to let him be. After all, would we really like Charlie at all if we tried to change him? Whether posing as a law student or writing a script, we decide to love Charlie for who he is despite his foibles. For better or for worse, Charlie can remain in our world as long as he is not hurting himself or anyone else. If he creates his own danger zone on a date by telling his potential girlfriend that he is a “full on rapist” instead of a philanthropist, all he loses is a chance at another date. No harm, no foul.

At the end of the day we cannot take Charlie very seriously. For one, we all have Charlie moments ourselves. Second, the number of Charlies in the world seem to be increasing, and should be expected to increase with the increasing use of recreational drugs. And finally, as long as we get it, what difference does it make?