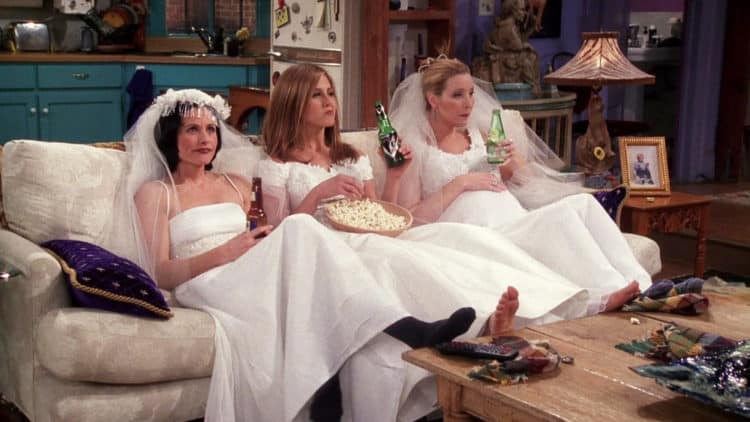 Black Friday is a-coming no matter how much some people are trying to batten down the hatches and prepare themselves for what’s to come. The hope of course is that people will be a little more reserved and remember not to trample one another underfoot as they try to get that perfect item that they’ve been waiting to see on sale all year, but really, the odds are hardly ever in the favor of those being trampled. These days it almost seems as though a person needs a suit of armor just to walk through a single store and the strength of a bull just to pry said item from anyone that lays their hands on it. In light of the coming day however we thought we’d go ahead and show some hilarious shopping moments from some of your favorite TV shows just to remind you that shopping actually can be a fun and memorable time.

Here are some of the best TV moments to take your mind off of Black Friday for a moment or two.

Remember when Will Smith used to be kind of a player on this show? The moment that he became hooked up with a woman seemed to be the moment that things started becoming kind of strange, funny but strange. In this episode he was wearing a fat suit that had been foisted upon him by a personal health trainer that was attempting to get Uncle Phil healthy. The suit was to show Will just what his uncle was going through packing so much extra weight, but the whole supermarket angle was Will being jealous about his girlfriend having a male roommate, which is something a lot of guys might have an issue with.

You would almost expect to see Fraser in a Whole Foods or some other natural store that doesn’t look like this place. But you also wouldn’t expect to see him collecting cans from a trash can either. This is kind of funny however since perceptions being what they are seeing Fraser Crane outside of a supposedly regular supermarket, filthy and in regular clothes that an average person would wear, and with a case of dog food and crumpled cans, is not exactly how people might envision this character. But it does make for great comedy since the people he socializes with tend to look down their noses at anyone they even think is beneath them.

You get the feeling that taking Kramer to Costco would be a very, VERY big mistake since you might leave the store and need to strap yourself to the hood or possibly just walk home since this guy is a walking impulse buy that doesn’t know when to stop. That and the fact that buying food that can feed ten families for a month or more is something that such stores are obviously made for since the size of the containers is just ridiculous. With that much tuna you could make sandwiches for an entire house full of kids and still not use the whole can. Yeah, Kramer is definitely not the kind of guy to take to a big box store, EVER.

Oh the Bundy’s. When their A/C goes out during one of the hottest summers on record the Bundy’s, after evading the neighbors with pitchforks and torches, make their way to the local supermarket where they eventually camp out for a while. After being discovered ‘living’ in the store however they’re forced to leave only to find that, after cutting in line past Marcy of all people, they’ve won an award that Marcy contests and eventually loses as the Bundy’s, as you well know by now, never really play fair. The whole episode is hilarious since the antics of the family within the store are the type that would get most people thrown out without question.

Do not mess with women when it comes to picking out their wedding dress, not EVER, because quite honestly you might just get run over since this is one of the most special times in the life of many women. But really, do not mess with women and their wedding dress since a lot of them will fight over them tooth and nail, literally if you really push them. This is without a doubt one of the only times that men are glad that they’re not invited to something that has to do with their girlfriend or fiance or wife. If you’ve ever been to a dress shop and you’re a man, you know the feeling, and you know that it’s best to just stay calm, quiet, and very, very still. Sometimes they lose sight of you, that’s the moment to make for the door.