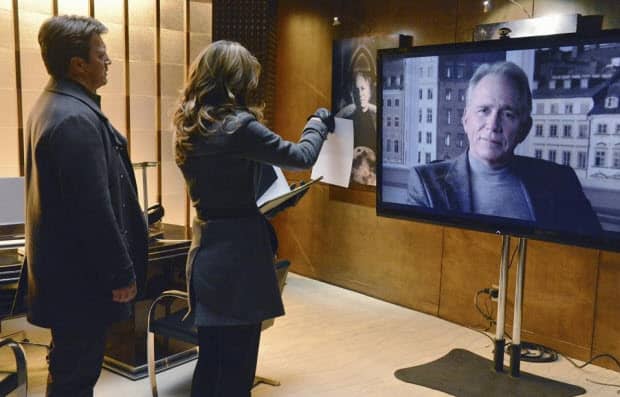 Gates and Alexis make a return appearance really fun episode of Castle. Why would several people confess to the murder of a struggling actor? And why won’t Alexis move back in with her dad?

When Castle and Beckett find our victim, struggling actor Justin Marquette, dead in room 147, they can’t find any reason why someone would have murdered him. Until, Anita Miller arrives and confesses to the crime. “11 seconds to a confession, that’s got to be a personal best.” Castle is supremely disappointed, it’s boring! But Esposito arrives and refutes Anita’s confession: she has an air tight alibi for the time of death window. “Why is she confessing?” “Not so boring after all.”

Anita knows all the details of their case, from how she knocked on the door to how Justin fell over and brought the chair with him, but she doesn’t really know why she killed him or what happened in the last couple of weeks… Beckett orders a psych eval, confirming that Anita has been disoriented but she believes she committed the crime. Just then, Sam Carson arrives and also confesses! He knows just what Anita knows, the same specific details, and he doesn’t know why he did it either. Kate’s frustration is so palpable in that scene. She claims sabotage in her case, but Anita and Sam don’t know each other or have any visible connections. Just as Kate’s frustration and Castle’s amusement hits a nice comfortable peak, Dwight Caruthers arrives to confesses as well! Well, he tries really hard to–Kate dismisses him for a clue. “Wait! I need to confess!” “Yeah, take a number.”

Kate takes a break to speak to Alexis, who’s been resisting returning back home, instead working long hours in addition to school to keep her rent paid. Castle is eager to have her home, but Kate’s worried it’s because of her presence there. “The last thing I want to do is make you feel unwelcome in your own home.” Alexis says no and claims it’s just pride: she made a mistake with Pi and needs to own up to her mistake, but Kate admonishes her for punishing herself. After a few seasons of implied distance between the two women, it was nice to see them interact and finally have a heart to heart.

Back on the case, a clue leads the team to Eternal Horizons Institute, basically a cult that came under fire when people died during one of their initiation ceremonies. Doctor Gustavo Bauer, their leader, gives them the runaround via Stolkholm video chat, knowing that the court won’t give them a warrant. EHI helped all the suspects with various problems, but then physically erased their connection, drugged them, and planted the memory of the murder in their minds. “This is straight out of Inception!” Justin was an actor in videos aimed to help the suspects, he was meant to represent their problem and they literally shot the problem down–one of EHI’s less thought out methods. But Castle figures out that they didn’t shoot the videos in the same room 147 where the victim died, it was at another facility with the same set up! “You should know, you’re engaged to a genius.” “Yes, a genius at annoying me.” I found Castle’s detail of the refrigerator being different to be very Encyclopedia Brown, if anyone remembered how those children’s mysteries were usually solved–by spotting an inconsistency or impossibility in the guilty party’s alibi (thanks TV Tropes).

Turns out, a colleague of Justin’s at his theater company just used the video to mask her crime. Her brother was killed during the botched initiation ceremony and she wanted revenge, even if Justin was an innocent party to all of it. She’s arrested and all of the confessors set free, but Dwight is still upset. He didn’t get to actually confess! Kate, “If I have to hear to hear that confession one more time, I’m going to shoot somebody.” Castle and Beckett wind down at home when there’s a knock at the door, no one’s shooting any one, Alexis is ready to come home.

A good, fun episode before next week’s intense one. I’m so glad Alexis and Kate got to have a moment after so many seasons of either skirting around each other or it happening off screen. It’s good of them to get those moments in before it moved to be awkward or forced to the audience at the wedding when we hadn’t seen them interact much. Now that they will be officially living under the same roof, I hope there are more conversations between the two of them; maybe even Alexis can trigger a Case! Eureka for Kate like she does Castle. Until next week!