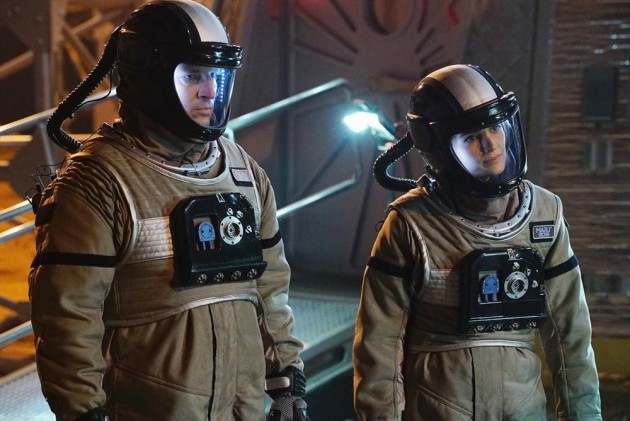 This week’s episode of Castle is a bit Alien, a bit Asimov, and a bit Agatha Christie. The theme? Enclosed spaces. While Castle and Beckett struggle with a crowded apartment, their latest case drags them into the deadly dynamics of a crowded space mission.

An astronaut, Major Tom Richwood, is murdered on a Mars mission, but somehow Castle and Beckett catch the case. “This might be a little out of our jurisdiction.” But instead of actually being in outer space, the victim was murdered in an intense Mars simulator down at an ersatz American Museum of Natural History. The program, Mars2018, is run by Viggo Jansen, who runs the simulation in advance of the potential of an actual Mars mission. No one’s been in or out of the simulator for the past 6 months.

In order to meet the crew the deceased belongs to, Castle and Beckett have to put on spacesuits and head down to the simulator. Castle is psyched! He actually signed up for Mars2018 a few years ago. “Where was I?” “We were fighting.” Down on “Mars,” Castle and the detectives check on the body. With space suits, a missing murder weapon, and the Mars terrain, there are very little clues as to how Tom died.

“One small murder for man, one giant mystery for mankind.”

There are four astronauts remaining in the module, five if you include MIRA, the mission control computer. “More Siri than Hal.” (From 2001: A Space Odyssey.) The computer is extremely intelligent and sentient. (Is MIRA Three Laws compliant?) Beckett wants to meet the crew at the precinct to interview them, but mission organizer Viggo (who has very Paul Rudd-like features) won’t let them out, claiming they will lose months of research and data. He stonewalls her into letting the team remain in the module.

According to the trackers each team member wears, they were all where they said they were, away from where Tom was murdered. Espo pulls up Tom’s latest video diary, where he says he thought he saw someone else in the Mars simulator. The staff claims that’s impossible, no one could get in or out–but Ryan uncovers that the security system was hacked. Clint Granger, a former applicant kicked out of the program, had a grudge against Tom on claims he sabotaged him and had the skills to perform the hack. Clint alibis out, but someone is seen entering and leaving his apartment during the time of the hack.

That someone is George Reyes, senior facilities engineer, who didn’t show up to work. He’s married to one of the other astronauts, Angela, who told him she wanted a divorce. He didn’t kill Tom, but he did sabotage the mission–he wanted to end the mission early and force Angela home. George checks out as well, but he says that someone could have used his hack to tunnel into the simulator.

Castle and Beckett head to the cobwebbed tunnel, where they find several things: the murder weapon, proof of someone tunnelling in, Kate also applied to a Mars missions, and a potential alien creature! “Told you this was like Alien!” In reality it’s just a gas mask attached to an air hose that scares Caskett half to death. CSU finds useable DNA inside the mask and discover it belongs to Clint, who lied to them about having access to the simulator. They also track the mask back to Newton Endeavors. As Castle and Beckett head over, Castle give his best William Shatner impression. “These are the voyages of Castle and Beckett…” Newton Endeavors is building themselves a very familiar space capsule. The owner of this program, Sir Ian Rasher, hired Clint to spy on Viggo’s Mars2018 plans.

Clint wasn’t trying to get into the simulator, he was getting information out. Mikhail, one of the astronauts, was drawing plans for Clint to sneak out. Mikhail cloned his tracker before he entered the module, so his recorded location could be a lie. When Esposito tries to talk to him about it, he attacks Espo back.

“Where you gonna run? You’re on Mars!”

Mikhail claims that he didn’t kill Tom, “but no one’s sad he’s dead.” He was a nightmare to work with. Mikhail has secondary proof of where he was: he was taking more pictures to sell to Rasher’s program. In the photos, the detectives learn that the rover wasn’t docked like MIRA said it was. Castle, Beckett, and Viggo talk to MIRA alone. She proves she is Three Laws compliant, but instead of the focus being on protecting humans, it’s about protecting the mission. She was convinced that Tom was a danger to the mission, and therefore killed him in order to protect it. What made her do this? Did she become sentient? Not quite: the other members of the crew made her believe, over time, that Tom needed to die. And with Mikhail selling secrets, he was the perfect scapegoat. Therefore, everyone did it, like in Agatha Christie’s [SPOILER?] Murder on the Orient Express. MIRA tries to protect the mission some more by activating a failsafe that was installed if someone started asking too many questions. Noxious gas starts pouring out of the computer, attacking Castle, Beckett, and Viggo, but they call for help just in time.

“Kubrick was right, AI is a bad idea.”

MIRA destroyed all of the mission data proving the team involvement in the murder, but Castle and Beckett lead the crew to believe there is a “black box” with all of the back-up files. They spill the beans and the mission is over. For now.

– “There goes my rise of the machines theory.” Looks like you were almost right, Castle! MIRA DID do it, though under heavy influence from each member of the team.

– One of the coolest Castle title cards ever!

– When Rick and Kate fight, they dream of being literally as far away from each other as possible…

– I know some science fiction, but definitely didn’t catch all of the references made here. Anyone got a list of science fiction tropes and reference in the episode? List them below in the comments!