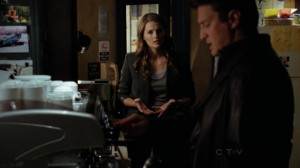 Unlike many episodes in which a third party comes between our dynamic duo, last night’s ‘The Limey’didn’t cause jealousy for either of them. Instead, it left Detective Kate Beckett heartbroken and Castle acting like a petulant child whom I started to progressively hate over the course of those forty-two minutes.

I admit I was a little reluctant about this episode and not at all excited about the fact that someone would presumably come between Castle and Beckett again, particularly after how last week’s ’47 seconds’ended. But I have to say I was pleasantly surprised. The case was alright (although I was more preoccupied with the characters — especially Kate — than the case itself) and I actually liked Mr. Scotland Yard. Of course the fact that he was really easy on the eyes helped, but I liked the way the character was written and that he wanted justice for his friend. Also, he wasn’t blatantly coming onto Beckett, so that helped too. Although — and I am not really one to judge since English isn’t my first language — that British accent left something to be desired, didn’t it? Sometimes I had to go back and watch the scene again so I could try to make some sense of what he was saying. But all in all, Mr. Scotland Yard got the seal of approval from me. 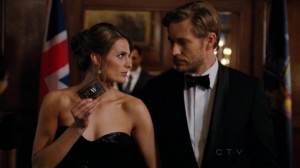 The entire sequence at that British Council party was brilliant and I particularly loved how Kate was super awkward at first and then turned on the charm when she had to get the prints somehow off of Charles Shaughnessy’s character. The chemistry between Stana Katic and Brett Tucker was really something and I loved seeing them together.

Then we have Lanie, who was the voice of the fandom in this episode, and made me love her even more. I loved that she pushed Kate to think about doing something, even though it was heartbreaking to watch our favorite detective watch Castle flaunt his newest bimbo. She still has no idea why he’s suddenly so cold and distant with her and I swear I just wanted to punch Castle’s pretty face in the entire episode. I mean, I get it, the guy is hurt and feeling betrayed and I understand that the way he found to release some of that anger is to act out. But the complete reversal to season 1 Castle (and in a way, it was even worse, because in season 1 there were no feelings involved) really ticked me off. 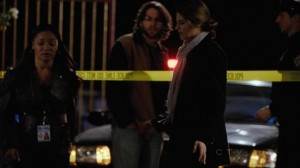 Honestly, I think both Castle and Beckett are at fault here and I know what Kate kept from him was huge, but what he is doing to her is just not cool. I can’t wait to see the look on his face when he finds out that she loves him right back and he was being a jerk this whole time without knowing the whole story and that he should have just talked to her instead of acting like a 5-year-old throwing a tantrum.

Not to mention the fact that he is keeping a pretty big secret from her as well, so he is basically being a hypocrite on top of being an immature jerk. Yes, I am really pissed off at what they did with his reaction and, if we really have to go down this road, I can’t wait to see what happens when they talk things out. I’ll bet then he is really going to feel like a fool. And I believe things will be even worse when his secret comes out now, because not only he’s being completely immature and ignoring her without even giving her a chance to explain herself, but I’m willing to bet that his secret is going to blow up in their faces and the outcome will not be pretty.

Anyway, despite the fact that Castle was acting like a child and that I wanted to give Kate a hug the entire time, ‘The Limey’was actually a really nice episode. The Lanie/Kate scenes were definitely one of the highlights and I really hope they won’t put this friendship in the backburner for another entire season.

PS: I am officially on Team Kate now, in case that review didn’t make it clear. What about you?

Note: We apologize if any comments were deleted. Technical difficulties seem to be occurring with our third party comment plug-in and some comments were messed up when we switched to a new server recently. We apologize for the unforeseen inconvenience, but the switch will help improve our overall site experience for all of you. Clear your internet browser’s cache and try commenting again. Further problems should disappear as the glitches with the new server are ironed out.