Home
Television
Castle
Castle: 5.19 “The Lives Of Others” Review 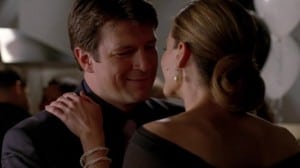 Well, that was absolutely delightful, wasn’t it?

ABC’s Castle reached a milestone in its history when their 100th episode, titled “The Lives of Others” aired last night. As most of you know, I had a chance to preview this episode last Friday and I am so thrilled that I can finally discuss it with you guys. I really hope it was worth the wait and lived up to your expectations.

Since Friday, I watched it all the way through once more and reviewed individual scenes a couple of times. After my excitement subsided, I was able to catch a few things that I didn’t really notice the first time I watched it, and even though it bothered me a little, the episode was still so much fun and had such a celebratory vibe to it that I am willing to let it slide. Suspension of disbelief and all that.

So let’s get the bad (somewhat) stuff out of the way first. What was up with Martha calling Kate “Katherine”? I have been thinking about it for the past few days and I just can’t come up with any plausible theories. It just felt so out of place that I cringed the first time I heard her say it. Going from calling her “Kate, darling” to Katherine is more than a little weird to me, so I’m turning this one over to you guys. What is your take on it?

Secondly, as much as I absolutely adored the whole April Fool’s joke slash birthday present, didn’t it all seem a little bit too perfect, like everything fell into place just right and the timing was absolutely impeccable? I don’t know, maybe it’s just me and I’m just being picky. It didn’t really bother me the first time around and I only really noticed it the second time. Maybe because then I already knew it was all staged because, during my first viewing, I was so caught up in the story that I didn’t even see it coming that it wasn’t true. 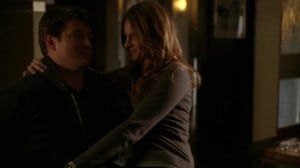 But other than that, I thought “The Lives of Others” was absolutely amazing. I am not sure it gets the title of favorite episode ever, but it certainly was one of the very best. Probably because it had everything that attracted me to this show in the first place. It was outrageously funny, suspenseful and I was just so glad about the way they finally showed Castle and Beckett’s relationship. One of my biggest complaints about this season was that they hadn’t found balance between showing their relationship and working a case every week, but it seems that they found their groove in the past couple of episodes, especially in the 100th one.

I loved that we finally got to see how they act as a couple outside of the precinct and particularly how affectionate Kate is towards him. I also really enjoyed seeing just how well she knows him. It seemed that it was always the other way around, that Castle was the one who knew all the layers of the Beckett onion. But it looks like it is a mutual thing and that Kate learned a lot about him in the past few years, even more during the time they have been together. If you stop and think about it, they have been together for almost a year now and it’s just a natural progression of their relationship.

Something else that bothered me a little was how they wasted a perfect opportunity for an “I love you” from Kate at that final scene. It just seemed like the perfect time, with Castle so completely amazed by what she had done for him, but it seems that they are still saving that one. I have a feeling it will either come out during episode 21 or in the finale. Either way, it just better make an appearance some time this season because I will be really peeved if they make us wait an entire summer for this. Although, we did make some progress when Kate very sneakily said “It’s one of the things that I love about you”. So, you know, at least it’s something.

I am sure I am forgetting to comment about a lot of things, but you guys please feel free to comment below or on Twitter (@lucianamangas). Bottom line is, “The Lives of Others” definitely lived up to my expectations and beyond. It was all I could hope for in such a major milestone as the 100th episode and I really hope we can make it to a hundred more.