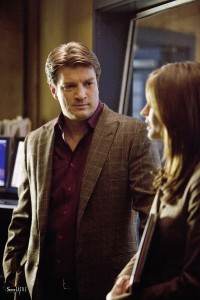 You know, I feel like I’m being completely redundant every single week here. It seems that I start every Castle recap saying how awesome the episode was and how the show never disappoints me. But the fact is that my statement week after week is nothing but the truth. And guess what? Last night’s episode ‘3XK’was no different. In fact, I think Castle reached a new level of awesomeness and it wasn’t solely because of Nathan Fillion’s presence, even though that sure helps.

‘3XK’was a highly anticipated episode and not only because Oz alum Lee Tergesen was a guest star. For months we have been hearing from the producers that Beckett and Castle would finally meet their match and he would be the one criminal who would outsmart them. The promo and sneak peeks released during the week leading up the episode, only made the fans even more curious. The comparison to Season 2 combo episode ‘Tick, tick, tick’and ‘Boom’were inevitable since the same vibe of suspense seemed to surround last night’s episode.

I, for one, could barely breathe through the entire thing. One thing it has accomplished is that it kept me on the edge of my seat for one hour, cursing the commercial breaks because I needed to know what was going to happen next.

The episode starts with a murder in an alleyway. Nothing unusual about that. The next morning, Alexis is telling Martha and Castle all about her secret admirer. I’ll be the first to admit that I wasn’t all that enthusiastic about this particular storyline. Since it was something so minor, let’s just get it out of the way, shall we?

So Alexis has a secret admirer at school. He leaves her poetic and romantic notes in her locker. At first, Castle sees nothing wrong with it and even encourages Alexis to keep her secret admirer a secret. However, as the case of the week progresses, he gets more and more concerned that this admirer might be a stalker seeking to harm his daughter. It all comes to a point where Alexis says he wants to meet her and said he would be at the park waiting for her. Castle freaks out, but Alexis says she doesn’t see any harm and he’s being paranoid and she’s going anyway.

Now my problem with this was that if he was so concerned about his daughter’s wellbeing, then maybe he should have been a little firmer about his wishes. And Alexis, who is always the most mature and responsible of the family, is willing to go meet a stranger who she has absolutely no idea who it is and doesn’t even care about what could possibly happen. It seemed a little out of character for her and I guess it just reinforced the idea that Castle just can’t say no to his little girl. I don’t know, it just fell flat to me. 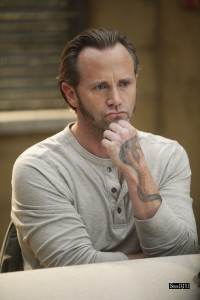 Okay, now that that is out of the way, let’s get back to the important part. A young, blonde woman has been murdered and the team gets called in. I couldn’t help but notice that this is the third — maybe fourth episode — that Castle and Beckett arrive at the scene together. It looks like she has been picking him up before going to the murder scene or that they meet somewhere and go there together and they always have coffee with them. In this episode, in particular, it looks like it was option number two.

Anyway, Lanie tells them the poor girl — Linda Russo — was strangled with a rope. Castle comments she looks peaceful and immediately remembers something. When Kate asks him what he is thinking, he says the M.O. looks exactly like another murderer who was never caught: he would strangle pretty, young blonde girls and then leave them in a position like they were asleep. Beckett dismisses the theory saying that happened four years ago and that he killed his victims inside their apartments and not in alleyways.

Back at the precinct, Kate talks to the victim’s mom and asks if she had any disputes with anyone or if there was anyone that would have wanted to hurt her. She says that her daughter lived for the job at a cable company, although she had mentioned that a guy was always staring at her and it had creeped her out. 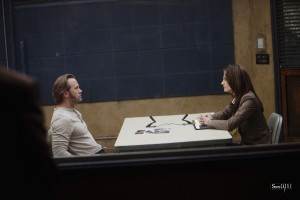 Lanie calls her and tells her to go to the morgue. When Beckett and Castle get there, Lanie says she did what Kate had asked and went through the old autopsy reports from the Triple Killer — the guy Castle had mentioned before. The girls from back then were killed in the exact same way Linda Russo had been murdered: Strangled with a green and white nylon rope. That piece of information confirms it. The Triple Killer is back.

Captain Montgomery calls a meeting to present the case to the team at the 12th. He explains that the Triple Killer killed three women in one week and disappeared for a month. Then he came back and killed three more, before vanishing for four years until now. All of his victims were blonde young women and he killed them in their apartments, after posing as a security guard or a repair man.

Ryan finds out who the creepy guy who stared at Linda at work is. His name is Paul McCartle and he was horticulture technician — basically the guy who waters the plants — and he had just quit his job the day before. He also has domestic complaints on record filed by his ex-wife. Linda’s neighbors remembered seeing a car exactly like the one Paul has parked in front of her building. That’s more than enough reason to bring him in.

Paul McCartle, however, insists that he never touched Linda. Sure, he had a thing for her and followed her a couple of times, but a security guard told him to back off and he got scared and didn’t follow her anymore. He also has a very distinctive sweat problem, to which Esposito immediately names him Sweaty Von Sweats a Lot.

His alibi checks out, so they decide to check into the security guy story Paul had told. Turns out that there is only one building in Linda’s block that uses security guards and none of them had filed a complaint against Paul. Kate says that maybe he wasn’t a real security guard; after all, the triple killer used to pose as one to get inside his victim’s apartment. Just as they are discussing this new idea, Captain Montgomery interrupts them saying they have got a new victim.

Kim Foster was killed the exact same way Linda Russo was murdered, except that Kim was killed in her apartment just like the other victims. They check her buzzer log and find out that the last time a call came in was at 7:35pm the night before. They look around the apartment and Beckett finds a name tag with the name Vince under the sofa cushions.

Later on, they get a match on a partial fingerprint found on the tag. They identify him as Marcus Gates. He is 42, 6 foot tall, 180 lbs with light brown hair. He also has a snake tattoo running down his left arm. Prison psych calls Gates a brutal, highly intelligent sociopath. He has served time for manslaughter and attempted murder. His last conviction was for breaking a bottle over a man’s head and almost killing him in the process. He served four years and just got released last month. He has no known address, no relatives and was raised in foster care.

The next morning, Kate finds out Gates had an inmate to which he gave everything he owned in prison to. His name is Jerry Tyson and he is still in prison. So they go pay him a visit, but Jerry is scared. Gates used to protect him and now that he is gone, Jerry is afraid. Kate tries to convince him to cooperate, but he says Marcus will kill him if he finds out he has been cooperating with the police. He eventually says that Gates had said once he used to go a bar at the Meatpacking District called Hog something.

So they locate a bar called Hogsneck Tavern. The entire team goes there, even the Captain. Esposito went ahead and located Gates inside. They’re getting ready to enter the place when Gates comes strolling out of the bar calmly. Everyone points their gun at him and tell him to get on his knees. Castle gets a little carried away and it’s a hilarious moment.