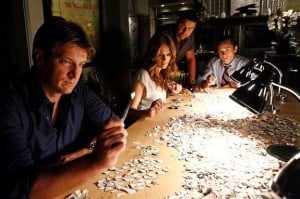 That was totally worth the wait, wasn’t it?

It had been a really long time since I had absolutely loved a Castle episode. It is no secret that I was not a fan of season 4 and that I was this close to abandon ship by the end of the season. But after a long, drawn out stretch of dull episodes, in which absolutely nothing happened, things seemed to fast forward in “Always”, culminating in the amazing premiere you have just watched.

There is just so much to talk about that I don’t even know where to start. I’ll try to follow  a chronological order. The much anticipated morning after scene was absolutely not what I had been expecting and yet, it managed to be awesome just the same. It really is a gift to the audience that this cast has brilliant comedic timing because that scene could have gone both ways. In theory, it was the cheesiest morning after scene, right? But Nathan Fillion and Stana Katic made it work and had me laughing out loud the entire time. Alexis’ first hangover and Kate sneaking out was just the cherry on top.

Also, I love the fact that they apparently found time to talk some about what happened with Maddox and everything, because I had honestly thought we were going to see that particular conversation in the morning after scene. In a way, I’m sad that we didn’t get to see it, but we were treated to something great either way. 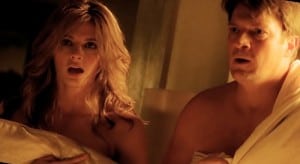 That said, I have to admit that I was terrified that they would screw this up. It has happened before, right? The leads finally get together and the show tanks. Just take House for example — sorry, House fans! But then again, there are cases in which the leads got together sooner rather than later and it worked very well, like in Nikita. So it’s really all about the writing and the chemistry between actors, to be honest, and we are lucky that Castle finally found its groove again writing-wise and that Stana and Nathan have this ridiculously amazing chemistry on screen.

That made for a very smooth transition for Castle and Beckett and at the same time that it seemed that they were tentative and shy and unsure around each other, it also looked like being in a relationship was easier than they had thought. There is one scene that really stood out for me when Kate is hopeless, saying she is never going to be safe again and he hugs her. That moment meant so much more and it was so much more intimate than the morning after scene, the ending scene or the first one at her apartment when Ryan shows up. That was my absolute favorite scene of the episode, maybe one of my top 5 scenes on Castle so far. 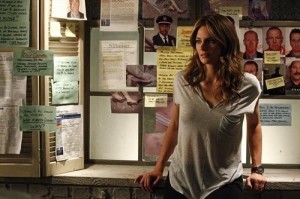 The Johanna Beckett’s case resolution was actually much better than I expected. They resolved it and at the same time they didn’t. It was actually quite clever because it didn’t completely end this particular storyline, given that it has been the lifeline of the show for the past four seasons; and they managed to solve the biggest mystery – so that now we know who ordered the hit on Kate’s mom — but he’s still out there. I loved that entire confrontation and the fact that, in the end, Beckett won because she was just smarter than the senator at the time and bluffed her way into a new agreement. But my favorite part was the look on Castle’s eyes when she said she was going to get justice for her mother, just not today. Right at that moment he was so proud of her. I think we all were.

Ryan and Esposito are whole other can of worms and, from the looks of things, they are not going to see eye to eye any time soon. But what I really liked to see was their loyalty to Beckett. Especially Esposito. It was a testament to their strong friendship and partnership in and outside of the precinct.

To conclude, I admit I even liked Captain Gates — maybe for the first time ever. That final scene with Beckett finally managed to somewhat endear her to me and if they keep writing her like that, I just might warm up to her.

Whew, guess I talked entirely too much and didn’t really follow a chronological order as I had intended, huh?

Anyway, what did you think?