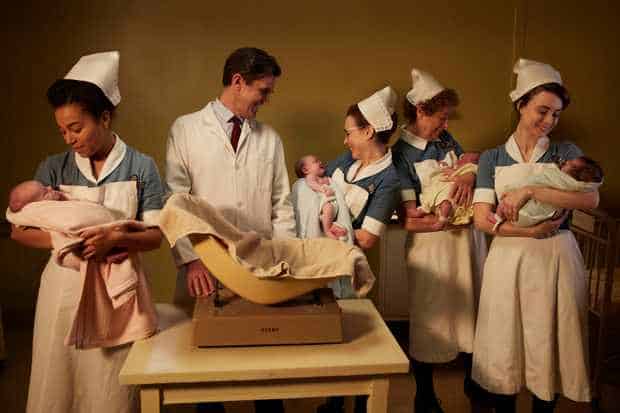 Call the Midwife is a period drama about a group of midwives working in the East End of London. It has proven to be very popular, as shown by its longevity as well as the awards and accomplishments that it has managed to secure. Currently, Call the Midwife is still being broadcast on the BBC, but there are other places where interested individuals in other countries can catch it as well, with an excellent example being the PBS for people in the United States. Here are 10 things that you may or may not have known about Call the Midwife:

1. Based on the Memoirs of Jennifer Worth

Call the Midwife is based on the three memoirs of Jennifer Worth, which are called Call the Midwife, Shadows of the Workhouse, and Farewell to the East End. The Guardian’s obituary for her states that she wanted to write about her experiences as a midwife in the East End of London in the 1950s because she wanted to preserve something about what it was like, which was important because said location received very little mention in contemporary accounts.

2. Worth Worked with the Community of St. John the Divine

As a midwife, Worth worked with the Community of St. John the Divine, which is an Anglican religious order that started out as a nursing order in 1848. Said religious order has undergone some changes over the course of its existence, but it is still very much involved with matters of health.

The East End of London has had a less than stellar reputation long before its use as the setting for Call the Midwife. This is because of its longstanding poverty, which came hand-in-hand with overcrowding as well as a wide range of social problems. In the 1950s, the East End would’ve still been in the process of rebuilding from the Second World War, which was necessary because it was the victim of heavy bombardment by the Germans.

With that said, it should be mentioned that Call the Midwife isn’t set in a nebulous notion of the East End as a whole. Instead, it is set in a particular place called Poplar, which as described by East London History, started out as one of the numerous places that were absorbed into London as the city became bigger and bigger. Poplar’s residents suffered much because of the Blitz during the Second World War. However, it is curious to note that it was bombed during the First World War as well, which happened because the Germans made a choice to send their zeppelins out on night raids.

5. Covers a Number of the Issues Faced By Medical Professional in that Time and Place

While its coverage of the relevant issues isn’t perfect, Call the Midwife nonetheless makes an effort to show the challenges that would have been faced by both East Enders and the medical professionals working in the East End. For instance, East London History makes mention of the mix of responses from East Enders to the provision of healthcare by medical professionals. On the whole, people are pleased. However, there are some who are suspicious for very understandable reasons because they have never had that kind of healthcare before since the National Health Service wasn’t launched until the late 1940s.

6. Covers the Experiences of Immigrants

Speaking of which, Call the Midwife has spent some time covering the experiences of immigrants in the East End as well. Perhaps unsurprisingly, immigrants faced additional challenges because of the suspicion with which they were met, with the result that they winded up becoming something like second-class citizens within the East End itself. With that said, it is worth mentioning that the East End has been home to newcomers to London for a very long time, though in earlier periods, there were more people flocking in from the rural countryside than from overseas.

7. Set in a Time Before Readily Available Birth Control

There are a lot of things that are taken for granted by modern society even though they have had a transformative effect on how we live. One excellent example is readily available birth control, which as described by the BBC, became possible in the 1960s but took some time to become more and more widespread. Call the Midwife is set in a time before readily available birth control, which was one of the factors that contributed to the sheer number of children being born as well as the sheer number of children that can be found in a single family on the show. In particular, it is worth mentioning one family on Call the Midwife with no fewer than 25 children, which was particularly disturbing because of their impoverished conditions.

8. Met with a Very Enthusiastic Response

On the whole, it can be said that the first series of Call the Midwife met with a very enthusiastic response. After all, its final episode brought in 9.2 million viewers, which is a colossal number of its kind of show on its initial home. In fact, the BBC made it clear that it was the single most successful new drama to make its debut on the channel since it started using a new ratings system in 2001, which makes it no wonder that initial series has been followed up by seven more.

9. Has Maintained the Interest of the Viewers

So far, Call the Midwife has been quite good at maintaining the interest of the viewers. This can be seen in how the episodes of the more recent series are still managing an average UK viewership of more than nine million, though there has been some slippage over time.

10. Time Passes in the Show

It is interesting to note that time passes in the show. For instance, the most recent renewal means that there will be at least 11 series, which will be taking the show into the late 1960s.