If you missed last weeks review you can find it here.

After last weeks episode, I began to have nervous feelings about “Hot Property”. I thought maybe Burn Notice would continue its line of bad cases. However, I found to be worried for nothing. This episode had everything to make Burn Notice another episode that kept my attention. With fast cars, high profile jobs, and good looking women, this week more than made up for the episode last week.

The case this week was confusing at first but, it was a good confusing. The writers brought the viewers to beleive that the job of the week was to help a man retrieve his sister from a foriegn diplomat. Then just as viewers get comfortable with this story, two shots to the chest change the story to that of theft, biological weapons, and a blast from the past. Season 3 villian Natalie returns and proposes a job to Michael and the gang. I always find that when villians and heroes join forces that you have both great teamwork but also great deception, and “Hot Property” had both. The deception 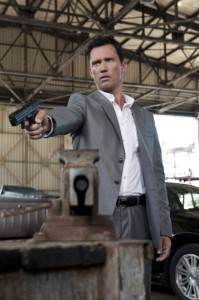 came to a head when Michael made a power play and was able to get the weapon from Natalie, but also get her locked up.

But wait, there was a bigger deceptive power move going on through the whole episode. Michael’s mother Madeline was able to trick Michael and Jesse into meeting for a face-to-face talk about there relationship. In one of the greatest speeches on television history, I have to say Madelines “Get over it” speech has got to be one of my favorites. Spoken like a true mother, Madeline treats the two boys like her own sons and basically tells them to grow up. Now maybe if she can help Jesse get a better personality. Oh how a television viewer can hope.

After being let down by last weeks episode, I felt a great sense of calm while watching this episode (well, as calm as you can be with your adrenaline pumping). This episode is in the running to be the top episode of the season. I give this episode a solid A-.

Disagree with the grade? Love the episode? Wish Fiona and Natalie fight would have been better? Whatever you want to talk about, don’t forget to sound off about it in our Burn Notice message boards.