What happens when one of the team becomes part of a hostage situation? Can the crew come together to save one of their own….and for that matter give the episode good ratings.

I was once again disappointed in the way the writers are using Jesse (Coby Bell). Bell has some decent acting ability and Jesse’s character should be utilized much more. I know the writers have spent 3 years building the main team of Michael, Fiona, and Sam, but I think it’s time to bring Jesse in as more than a sidekick. Maybe the writers are keeping him out of bigger things because they want the reveal of Michael being the “burner” to Jesse to be a big deal. I do have to say Jesse really stood out this episode when he argued with the client for making a deal.

As for the episode, it was great. Fiona being kidnapped allowed for less explosions but we still got enough action out of the episode. We are starting to get a better feel for the Michael/Fiona relationship and the writers are amping it up my hinting at a possible love triagnle soon with Jesse. However, a love triangle still can’t save Fiona’s (Gabrielle Anwar) acting ability. Her dialogue this episode was presented horrible in my opinion and I think the writers should stick to her being used for explosions and quick one-liners against Sam (Bruce Campbell). 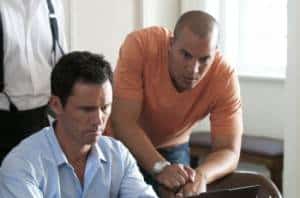 The story was decent this week. Nothing really out of the ordinary for the Burn Notice team but it still seemed fresh. The kidnappers were a little to easily conned into losing but then again they were up against a team of spies. I was however disappointed in the character Mr.Atkins. The way he just decided to pay up was a little rushed and a little devilish. It even had me thinking he was part of the kidnapping. Luckily we don’t see much of this character after the first half hour.

The season story arc has finally got back on track and it seems like we will be getting great episodes now till the fall finale (August 26 is coming up quick). With out spoiling too much, let’s just say the Bible in this episode may do more than teach the Burn Notice team about Jesus. As for Michael’s influence in this, his lie to Jesse may come back to haunt him in a nasty way, especially if his mother sees what he lied about.

This epsiode seems to mark the turning point for the summer season. If the rest of the summer episodes follow suit, the fall finale should be great. B+