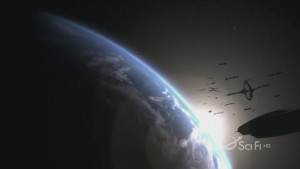 Battlestar Galactica was never going to end in an acceptable way as far as its more rabid fandom is concerned – mostly because it is ending, and along with it all of the enjoyable social rituals fans developed to go along with it. At the end of the day – regardless of how well constructed a mythology is – we are creatures of comfort. Just look at how we kvetch when our favorite shows change time-slots. It is rarely actually due to the change itself creating an inconvenience, it’s most likely the upset to our inner clocks – there is just not a good enough story to turn our lives upside down over, be it Battlestar Galactica, LOST, or Heroes (which should be announcing an end date soon enough.)

That said, how did Battlestar do in driving it home? I’ll admit, I was a bit underwhelmed by what seemed to be the straight-forward space opera setup of the past few episodes. I’m more addicted to the mysterious and weird plot elements. How was Starbuck brought back from the dead? How is it that Roslin and other non-Cylons were experiencing shared visions? What happened to the ‘us’ of Earth? That there would be a fantastic space battle with astonishing special effects there was never any doubt – as far as I was concerned. Nobody has ever wondered whether Battlestar Galactica would deliver top of the notch sci-fi action fare. That has been there since day one, unique visual styling and all – and I’m not even a big fan of snap zooms in real life.

Ron Moore has said that he had a revelation that it was “it’s the characters stupid” all along. Something he called an “epiphany.” Channeling his knack for pulling in political aphorisms, I respond with “No Duh.” Again, that anybody should expect Battlestar Galactica to fail on the character aspect of story telling is a serious miscalculation.

Moore’s moving flash of light prompted him to give us preachy flashbacks that seemed to highlight how alcohol impairs judgment. Adama had the chance to bounce Boomer, but alcohol clouded his judgment. Roslin gets loosened up with a little alcohol and winds up sleeping with a former student who was hot for teacher – something she wakes up from and somehow converts into an epiphany of her own, burying herself in liberal politics. Starbuck and Lee get drunk and almost sleep-together while her boyfriend, his brother, sleeps near by. Okay, enough booze please. Is this a plea for help Moore? Because I have to tell you, as a platform for character revelations “what they did before the war, while they were drunk” was kind of boring – and the omnipresent thread of alcoholism did come off as some sort of tip of the brain partial abortion of an allegory. 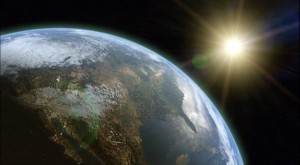 Yeah, that’s right – scorched earth had Cuba and the Yucatan. Just like ‘other’ Earth. (Pic from Crossroads Part 2)

The whole thing with our Earth turning out to be some other place not named Earth… good in hindsight, but doesn’t fit. Here is the problem. When we first see burnt out earth, we can see our continents. Yeah, that is our earth. As a matter of fact, when the episodes involving barbecued Earth were introduced, the science was studied to a fine degree by the eggheads here, and yeah – that was Earth. So the whole “you make your own Earth” solution is out the window. Two planets, exact same continent structure – not buying it.

Of course, the capital offense came in doing what we shouldn’t expect Battlestar to have an easy time with: tying up those loose ends. Space opera action, no concerns. Characters, no concerns – but messed it up anyways. Tying up loose ends? Fail. Deus Ex Machina has become a cop-out device for writers in the modern era. We are supposed to be refined descendants of decade upon decade of narrative refinement, saying ‘god did it’ is not only unacceptable – it offends our finely honed sensibilities as an audience. When you reduce the explanation to “it was God’s will,” then have the nerve to insinuate that God is actually somebody else – setting up yet another mystery you don’t intend to elaborate on – all you are really saying is that you didn’t bother to work these things out.

For the lofty idealism and shower epiphanies, Battlestar’s finale winds up being a product of creative energy being focused where it didn’t need to be. Yes, the action elements were fantastic. The characters transformations that occurred within the trenches of battle were infinitely more compelling than the drunken antics of the flashbacks. The inability of the writers to wrap up the weirdness of Battlestar, however, really damaged the show’s mythology. It will be hard to look back with the explanation of “God’s Will” and take any of the metaphysical twists and turns as anything other than poorly thought-out attempts to tap into the appeal of shows like LOST, or Twin Peaks.

On the grounds that the second ‘Earth’ is an impossibility in the plot (and no, I will not consider another Deus Ex Machina like ‘time travel’ to explain it), the bizarre fascination with how alcohol impairs judgment, and the lowest common denominator of using ‘God’s Will’ to explain everything (along with the needless new mystery of who the guy is who doesn’t like to be called God), I give BSG’s series finale two out of five stars.