Home
Movies
Bruce Willis and Steve Guttenberg are in a Movie Together, Period 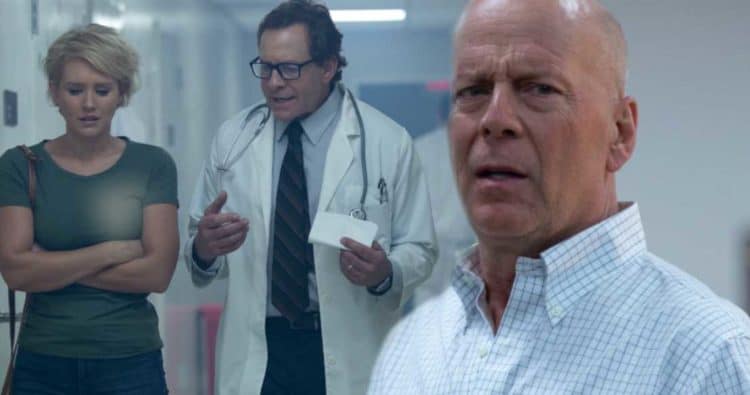 So Bruce Willis and Steve Guttenberg have never been in a movie together as B. Alan Orange of MovieWeb tells us, and they’ve never been cops together in the same movie, well, at least one of these things has been rectified. So far the movie Trauma Center looks as though it might be something that something like CinemaSins or Honest Trailers will be getting hold of rather quickly even as people tend to find that it might be kind of a nice thriller and a change of pace. Honestly it does bring up a lot of questions already since the idea of a key witness to a murder being sequestered all alone in a wing of the hospital where pretty much anyone with half a brain could find her seems kind of questionable. Wouldn’t you think that the cop might put her in protective custody where NO ONE else, not even his fellow officers, would know about? And on top of that if you can’t trust your fellow officers, as it’s been seen in countless cop movies, then it would seem that witness is kind of on her own anyway since that seems to be the general theme of such movies. It tends to make a person wonder if the overall formula for a cop thriller is that cops are window dressing right up until the plot needs them to step up and do their job.

The movie does seem to be another way to make a damsel in distress come out as a strong-willed woman that will do what it takes to survive and somehow outwit two veteran police officers that look more like thugs with guns. That kind of theme has been used to death in the movies as well but there are times when it seems just plausible enough if the bad guys are shown to be confident enough in their abilities that they don’t take every precaution to make sure that their prey doesn’t escape. This goes back to what I’ve said about bad guys and why they always lose, the air of over-confidence is pretty convenient for any movie since it means that the protagonist is going to be able to outsmart, outmaneuver, and in some way outdo the bad guys or at least hold out until help arrives largely because the bad guy seems compelled to think that they’ve got every angle covered and can take their time and taunt the protagonist. In this case the guys would be better off watching to see if she made it out of the room before they could break in, if possible, and were less interested in talking and taunting than they were in beating the door down. It’s true that hospital doors are pretty solid and hard to push open at times on the best of days, but with two strong and able-bodied men on hand and with access to a few different tools they could use to their advantage, it’s hard to think that she could escape with what little time she really had.

But that’s a part of what makes this movie a thriller, the fact that there are tiny gaps in the bad guy’s plan that she can squeak through when she needs to in order to survive. Seeing as how the trailer shows that she’s still kind of banged up though it would be a little hard to think that she’s going to move fast enough to really keep ahead of the two antagonists. That, and tricking them into going where she wants them to go and then springing a trap seems to imply that she’s able to think on her feet, which is great, but also happens to know just what to do in order to harry the thugs and possibly incapacitate them. Maybe the cop that’s trying to protect her should have left a cell phone that she could contact him with, but then again maybe that would be against hospital policy. Still, leaving a witness alone in a hospital, in a wing that seems to be all but forgotten, almost seems like a massive setup since it’s not typically what you might see in a Bruce Willis movie since he’s usually been the type that plays roles that are very protective of witnesses. So why just dump someone that’s so important to a case in a spot where the killers might have a free go at her?

So far this movie is pretty intriguing even if it’s raising some interesting but troubling questions. As far as Guttenberg and Willis though it would seem that they might not be interacting all that much, which makes the whole excited bit about it kind of hard to stick with. But it’s still worthy of note since a lot of actors have been seen to act alongside each other throughout the years, though it’s surprising to discover who hasn’t interacted.