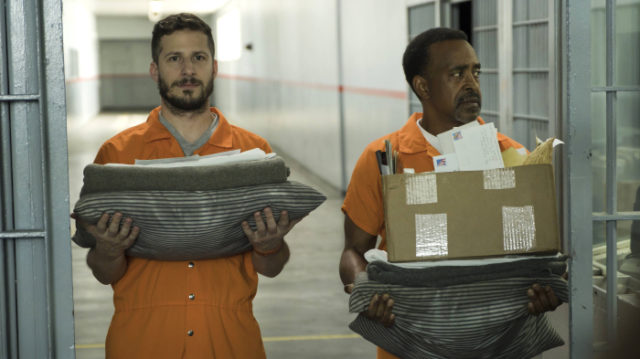 The fifth season of “Brooklyn Nine-Nine” didn’t take it easy on fans. It packed as many big moments laden with humor as you can fit into a series. The fourth season ended with Jake and Rosa being framed for robbing a bank, and then found guilty. It left us all with the question of what was going to happen to the characters now. Cops and prison are not a good mix. Here are the five best funniest moments from the premiere that we waited so long to see.

This is one of the funniest moments in the premiere. As the group are looking through the damage caused by rats, the camera pans onto a storage box that looks like it contained documents. The box was full of cocaine seized for evidence and the rats treated themselves to a high on the department. This clip is a montage of Captain Holt, aka, “Velvet Thunder” and it’s heavy laden with outstanding humor. He’s at his finest as he attempts to be diplomatic, but his need for funny business takes over.

2. “Jake Realizes His Only Friend in Prison Is a Cannibal”

This is a short clip but it’s hilarious. As Jake attempts to acclimate himself to his new surroundings in jail, he makes a friend. As the two are having a heartfelt conversation over a meal in the mess room, Jakes new friend makes a disclosure. He tells Jake that he’s in prison for cannibalism. He’s eaten nine people totals, but shared that because he ate the evidence, they couldn’t prove all of the crimes. He’s disappointed that his family doesn’t come to visit him in prison and doesn’t understand why they want nothing to do with him, just because he ate a few people. When Jake asks him if he’s a cannibal, he responds, “I prefer to think of myself as a wood worker.”

3. “Captain Ray & Terry Check on Rosa While She’s In Prison”

This is another funny moment that happened in the premiere of season five. As Captain and Terry stop to check in on Rosa in prison, they are all distracted by a fairly disturbing love scene happening in the bay next to them. It seems the roughly hewn couple having their visit are in need of a room for a conjugal visit instead of rapaciously smooching on the plate glass that is between them.

4. “Captain Ray Reminds Rosa She Is More Than Just A Number”

It appears that Captain Ray has been reading too many textbooks on what prison can do to the psyche. He continually repeats Rosa’s name to her. When she asks why he’s doing it, he explains that prison can be dehumanizing and while reminding her that she is more than just a number, he infuses her name repeatedly so she won’t lose contact with who she is. Terry gets in on the action trying to reassure her that they are there for her in a hilariously emotional display of two guys in over their heads when trying to help.

Three weeks has taken a toll on Jake as he gives Amy the embrace of her life. He’s more than a little touchy feeling and it’s so disturbing that the female guard can’t take it anymore. She breaks it up and makes him stop “touching” Amy so much.