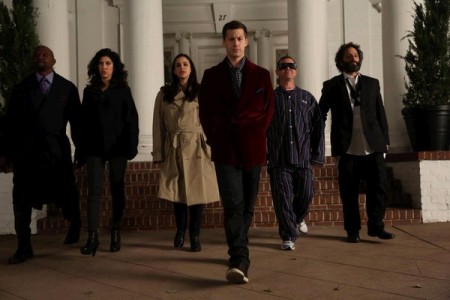 Brooklyn Nine-Nine was in fine form tonight, as this week’s episode brought the whole squad together in a mission to find Holt’s run-away dog, Cheddar. Between some fantastic physical comedy from Boyle, dark and weird sexual tension between Rosa and Pimento, and great character moments for Jake and Holt, this episode hit all the marks, resulting in one of the best episodes this season.

The whole episode centered around Holt going to visit his husband, Kevin, in France. While away, he needed someone to watch his house and his adorable corgi. Jake stepped up and volunteered himself and Amy for the job, knowing that it was important for Holt to take this trip. Charles also tagged along with them due to his deep understanding of dogs, despite his temporary blindness because of an eye procedure. All of this set the stage for the characters to shine, with Amy’s love for all things binders and organization leading her to take responsibility for making sure everything went well.

While a nice concept, things running smoothly doesn’t tend to make for great comedy which means something had to go wrong. Or, in their case, a lot of things. Because whenever you put Jake and Charles in charge of something, even with Amy there, things aren’t going to end well. While almost starting a fire and destroying Kevin’s clothes and their table would have been enough, the true mistake they made was letting Cheddar escape. With the dog on the run, the whole squad had to band together to find him, in one of the most high stakes cases they’ve ever worked.

Taking this idea and treating it like an actual case led to a lot of laughs, as everyone was given their mission. Gina was sent to delay Holt’s return from the airport, after he decided not to leave because he didn’t trust them with the house. Perhaps the best moments came from the true comedy brilliance of Joe LoTruglio, who was playing a temporarily blinded Charles. Running into walls and accidentally picking up a possum, thinking it to be Cheddar, are just a few of the brilliant physical comedy moments we saw from him in this episode. Not to mention that he looked absolutely hilarious with his light blocking glasses on, walking out of Holt’s house in what appeared to be Holt’s pajamas.

The comedy didn’t stop there, though. After not being too impressed with the Pimento character last week, I’m happy to say that I thoroughly enjoyed the smaller doses of him we got this week. While I still don’t totally buy Rosa’s initial attraction to him, the two did share chemistry in this episode and it may very well turn out to be an interesting relationship to watch develop. Their sexually charged moments in the office, where they somehow managed to make simple office tasks sexy, were very fun as was Terry’s utter disturbance with whatever was happening between them.

As the episode progressed and we saw Pimento, who is clearly still damaged from his undercover work, shy away from the connection with Rosa, one of the best moments of the episode presented itself. Terry’s ‘advice’ to Pimento and Pimento’s subsequent declaration that a few simple words had really changed his life was absolutely hilarious. By the end of the episode, it became clear that the show seems to be establishing something real between Rosa and Pimento and while he may not stick around forever, if they keep this up, it will be a fun relationship to run its course.

No episode of Brooklyn Nine-Nine is complete without solid character moments and those came from Jake and Holt this time. Having initially blamed his desire to return on not trusting Jake and Amy with his house, Holt finally opened up at the end of the episode about his true reason for being hesitant to leave for the trip. He and Kevin have been fighting a lot recently and Holt is scared of what will happen if they continue to fight in person, instead of just over the phone. This showed a very human side to Holt, who is usually so closed off emotionally. It also allowed for Jake to step in and share a nice moment with him, as he assured Holt that his relationship with Kevin was one of the strongest he’s ever seen. Whenever both these characters open up and share a real moment together, the show always nails it and tonight’s episode was no exception. Between this and the great comedy, the episode ended up being one of the best of the season.

-“What happened to Blockbuster??”

-Pimento’s throw away line that Rosa is so in tune with her emotions.

-Amy’s excitement over the binder.

-Anytime we got a glimpse of Cheddar’s adventures. Seriously, I’d watch a whole episode of what that dog got up to while on the run.

The squad bands together to find Holt’s missing dog in a very funny episode of Brooklyn Nine-Nine.