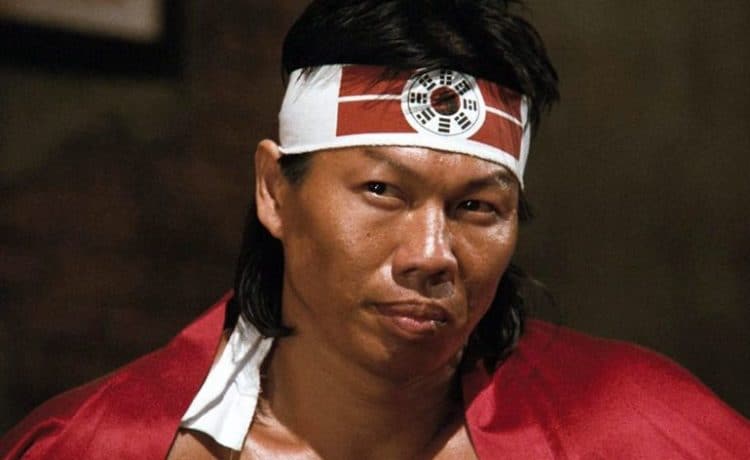 He’s been the bad guy so many times that you can’t help but think that it’s the role he was born to play. Bolo Yeung has been seen in numerous martial arts films and was at one time a very good friend of the legendary Bruce Lee. His real name is Yang Sze, but upon being named Bolo in Enter the Dragon, Yang decided to take up that name and it has stuck as his stage name ever since. His portrayal of the villain in martial arts films has been absolutely amazing since he doesn’t really have to speak much, he just has to stare at you and occasionally glare in order to get the message across. That message is typically: You are next.

If you really want to get an idea of how awesome he’s been, take a look at these clips.

Bolo has been a bodybuilder and an avid practitioner of Kung Fu ever since the age of 10 and he was a great friend of Bruce Lee. In fact it was Lee that invited him to come and star in Enter the Dragon. This is the kind of guy that when you look at him you can just imagine that he would be able to do some serious damage, but you also get the idea that because he knows what he’s doing that he wouldn’t have to talk himself up that much. The moment when he takes on the guards and kills them all with his bare hands was actually kind of an awe-inspiring but frightening thing back in the day. You get the idea that a person can have their neck broken or be crushed by someone that’s squeezing them too tightly, but of course in the movies that’s a lot easier to accomplish than it would be in real life. With Bolo however you somehow get the impression that this guy could actually do it.

There have been those that have stated that it must have been a letdown for Bolo to work with JCVD after having worked with a legend like Bruce Lee, but in truth the pair are very good friends and have been since their time working on Bloodsport. Say what you want about him but JCVD is the real deal. So he went to Hollywood and became a big movie star, the guy is still a legitimate practitioner of martial arts, and as such has been worth Bolo’s time. There’s no telling who’s better since in the movies they’re out to hurt one another, but in real life they happen to respect each other quite a bit. JCVD has even admitted that Bolo was the reason he got into martial arts in the first place.

This film didn’t get a lot of positive attention after it released but at the same time it was still at the climax of JCVD’s career and helped to elevate both him and Bolo just a little more in terms of their star power. Bolo as usual plays the tough-as-nails bad guy that can seriously put a hurting on someone and will tend to kill his own subordinates for failure. This guy was just flat out scary in an action movie since he moves with a purpose and won’t stop until his target is lying in a bloody pool at his feet, or until his boss tells him to. The mere fact that he is that awesome both in the movies and in real life is something to be proud of and for a long time now the name Bolo has been kind of synonymous with ‘awesome bad guy’.

He’s the kind of bad guy you would never want to take on unless you knew you were that skilled and could withstand a great deal of punishment. Just look what he did to the guy that played Ogre in Revenge of the Nerds.

Ray Jackson is the kind of guy in the movies that you really don’t want to stand up to since he could probably clobber you with one or two hits. But Chong Li takes what he has to offer and then dishes it right back even harder. It might be just a movie but you get the impression that if Bolo really wanted to cut loose there wouldn’t be a lot of guys that could stop him, especially if he had certain hate on for the guy he was fighting. But once again, knowing that you’re tough and having to prove it all the time are two very different things. Throughout his career Bolo has been a big help to a lot of people when it comes to acting and to choreographing fight scenes, and there’s no doubt that he’s one of the best, and will remain that way for many years to come.