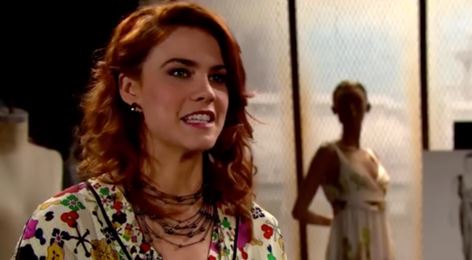 The Bold and the Beautiful spoilers for the upcoming week are good. The Spectra family has a second chance. Thanks to Liam’s investigation into his father and his role in the downfall of the company, and thanks to Thomas’ financial backing, this company has a chance. But they can only succeed if Sally begins to think and work smart rather than hard. She’s got a lot riding on this, and she can’t mess it up this time. She’s going to have to make a tough decision, and that decision is going to include her grandmother. Can she afford to allow Shirley to stay with the company, or is it a better idea to get rid of her?

It’s not that Sally is completely innocent, but she does listen too much to her grandmother, who seems to give very bad advice. We want her to make some positive changes in her business, and we’d love to see her find some love. We just don’t know if she can do that, and that’s too bad. What we do know is she might be able to make a go of her business if she’s willing to put an end to Shirley’s decision making. She’s the bad influence who wants to lie and cheat and keep the Forresters and the Spectras as far apart as she can, and this is not good.

Sally seems to want to make amends, to work together, and to make sure she has a happier future. She sees how miserable her grandmother is, and she doesn’t seem to want the same for herself. She’s someone who is not going to stop what she does and loves, but she is someone who might just grow a bit of confidence in herself and tell her grandmother it’s time for her to retire and stay out of her life. But will she do this now before it’s too late, or will she wait until grandmother Shirley makes another costly mistake Sally will ultimately pay for?