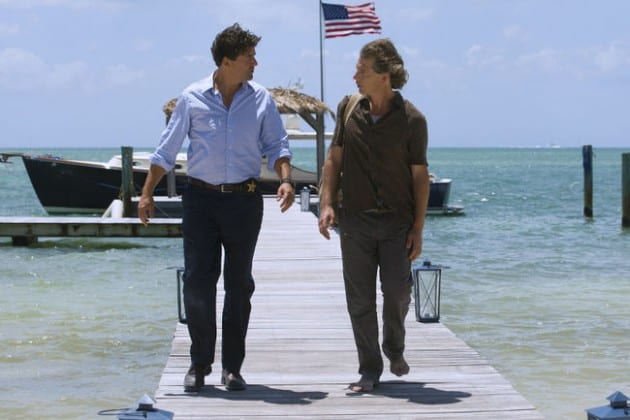 The much anticipated Netflix original series Bloodline, created by Glen Kessler, Todd A. Kessler and Daniel Zelman, the masterminds who brought us the gem that was Damages, is finally available for users to binge on.

In its first episode, the family drama, with a twist, introduces us to the Rayburns, a family filled with by a bunch of duplicitous characters, most of whom appear to be leading more than a decent existence. The catch is that, naturally, not only are things not what they seem to be, but also, the seemingly functional dynamic of the clan is threatened by the visit of one of its own. From its first frames, Bloodline‘s premise is clearly set, as John Rayburn (Kyle Chandler) exposes via voice over that “something’s coming.” That something, that curse, is connected to John’s older brother, Danny (Ben Mendelsohn).

As Bloodline‘s first episode moves along, we collect more information that illustrates the family picture. John is the sheriff, the golden boy, who has a good marriage and two kids; in spite of being the second oldest Rayburn, he seems to be the oldest of the bunch, which makes absolute sense since Danny, the eldest, is a total wreck; at every turn, it looks like Mr. and Mrs. Rayburn had him as a first draft, then did a lot of editing and had three well-adjusted kids. Then there is Kevin (Norbert Leo Butz), a temperamental beach bum, who looks like he is living in a condemned house, and last but not least, Meg (Linda Cardellini), the baby sister and overachieving princess, who navigates with dexterity the testosterone-filled waters in which her family is immersed. The mother of the four siblings, Sally (Sissy Spacek), along with her husband, Robert (Sam Shepard), owns a waterfront hotel in the Florida Keys, which the couple also runs.

In celebration of Mom and Dad Rayburn’s 45th anniversary, and given the fact that they are going to get a pier dedicated to them for their service to the area, a big weekend party is to be held at the hotel, and to everyone but Sally’s displeasure, Danny, the only member of the family who does not live in the Keys, is attending. While the preparations for the bash are underway, and as Danny is heading toward the family reunion, both Meg and Kevin demonstrate their weariness regarding their big bad bro coming back to town. John, who is in charge of picking him up at the bus station, is not as vocal; however, everything about his demeanor shows how resistant he is when it comes to seeing his brother. From the get-go, Danny is so feared that he might as well be nicknamed Lindsay Lohan.

As hurricane Danny is getting closer to the place where the family who does not want him is, he holds a piece of paper, then a mysterious woman that he is imagining (Mia Kirshner) asks him if he wrote something to read that night at the party. He ignores his subconscious, before he decides it is a bad idea to have a family reunion and gets off the bus. As a result, John is stood up. It is later on, just as the sheriff tells his mom that Danny is M.I.A, that the devil shows up.

Everything Danny-related seems to either stir trouble or rub people the wrong way, from him bringing a date to the anniversary party, to wanting his plus one to sit with him, to a past that is brought back constantly but with little to no detail. He is, no doubt, a hot potato; however, as far as Bloodline has shown, his only crime has been to stand his brother up, to find a partner in crime in his old friend, Eric (Jamie McShane), and to look like he spent the night in jail, which, in all fairness, is how Kevin looks at the beginning of the premiere as well. It is clear that whatever happened in the past left an open wound that no one wants to discuss

At the same time, the rest of the Rayburns show signs of having flaws, too. John is worried about his brother’s presence, yet he babysits him so thoroughly that it’s easy to tell that he either wants to fix him and is frustrated because he cannot, or he feels guilty. Maybe both. Kevin and his wife Belle (Katie Finneran) have a great relationship on the surface; however something is very off with them, and the fact that in his first frame, the third Rayburn wakes up alone in a place that looks nothing like a home, and where no woman with eyesight would ever go, sends red flags. Furthermore, Meg is cheating on her boyfriend Marco (Enrique Murciano) with Alec (Steven Pasquale). The moral in all this is that the Rayburns do not abide by “let him who is without sin cast the first stone,” or Danny has done something so terrible, that has not landed him in jail, that regardless of their own misdemeanors, the siblings feel like they are on a higher moral ground.

Once the audience is absolutely in the know that Danny is most definitely not welcomed by his brothers and sister, yet his mom is excited he has joined the celebration, a reveal that hits with the gentleness of a wrecking ball is put into motion in one of Bloodline‘s best executed scenes. While addressing everyone at the party, Daddy Rayburn gives a speech about how he and his wife started their business as they were starting their family, then he praises the woman who married him 45 years ago, and goes into detail as to why his kids are his pride and joy; he flatters them all but Danny, whom he speech-shames in public for being the black sheep of the family. Danny, on his part, stands and is ready to read the words from the paper he had with him on the bus; however, he has a last second change of heart and makes a joke where he is the punchline.

The B-story arc is, at least at this stage of the show, related to John, who, along with Meg’s boyfriend, Marco, has to investigate a crime, after the body of a young woman is found in the mangroves. As that happens in total disconnect to the family dynamic, Danny who is staying at John’s tells his brother’s wife a story about his involvement with a woman he used to date, who once asked him to punch her in the face while they were sleeping together. Diana Rayburn is stunned by the tale Danny is sharing; however, the story itself is not as alarming as the strange vibe between the two characters. For some reason it is very unsettling to see them hanging out with no one else present, which quite frankly is a testament to the actors’ skills.

Danny also tells John that he has every intention of staying in the Keys and would like his help in convincing their father to let him work for the hotel. John reluctantly agrees and talks to the patriarch, who, in turn, says that he leaves the decision to John, Kevin, and Meg. As a result, the three discuss what to do, while John vouches for their big brother, Meg is a little bit of the swing vote, and Kevin is in no way shape or form voting yes.

After Danny is found lying naked on the beach, a product of substance abuse and hallucinations, John decides to break the news to Danny: he cannot stay, but the detail he leaves out is that the verdict was reached by him and their siblings. Instead he states that their father is not ready to forgive Danny, which prompts the eldest sibling to decide to leave. John gives him a ride to the bus stop, convinced they all dodged a bullet.

The episode ends with a cryptic flash forward (a storytelling device employed throughout the first episode), in which a drenched John carries his unconscious big brother to a boat; however, instead of saving Danny, which is what the audience is led to believe up until this point, John sets the ship on fire and jumps off. Book-ending Bloodline‘s first episode, John asks, through voiceover, not to be judged; he explains the Rayburns (except Danny) are good people, but they just did a bad thing.

All in all, the premise of Bloodline and the show’s characters show enough substance and quality to keep me watching. Even though the pilot is not as gripping as Damages‘ (the latter’s first scene was much more haunting and in spite of Danny being toxic he does not appear to be Patty-Hewes-lethal), there are some parallels that can be drawn between the two TV shows, which is a good thing. In particular, I’d like to note that because of how information is exposed and due to the fragmented narrative, both text and subtext seem to be morphing as the episode evolves, keeping the audience on their toes and fishing for details and symbolism.

On the other hand, it is obvious that blood will be shed in Bloodline, and most certainly, there has been some shed already. The enigma is dual since it is not clear why everyone shows animosity towards Danny, something that is rooted in the past, while his demise is related to the events shown during the present. Added to that, he is indeed running from something; there is absolutely no way that Mia Kirshner was cast to play a character that is not trouble. She WILL be the catalyst of something, and it’ll most likely be, as John would say, “something bad.”

– The cast is pretty much perfection. Even the guest stars are top notch. It is also a nice touch to have Broadway virtuosos in the mix.

– The show, like all Netflix productions, has ACTUAL credits. Call me old-school, but credits do add a layer to the storytelling process. Bloodline‘s are very telling and well-crafted.

– The Keys are fittingly employed. There is openness and sunshine, yet the area is surrounded by swamps.

– Bloodline is “Brothers & Sisters meets Damages” as it has grown ups with grown-up problems and a family being shaken from the core, all told in a fragmentary, yet not disjointed fashion, with enough intrigue to keep the audience coming back for more. 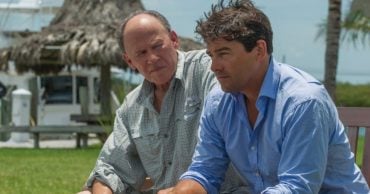 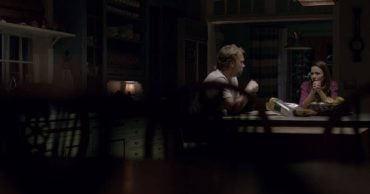 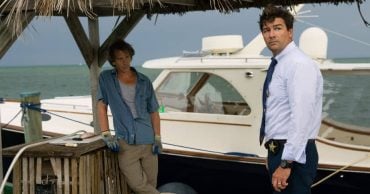 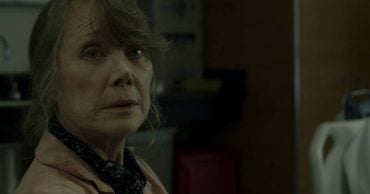 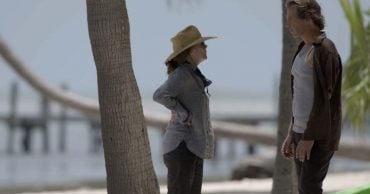 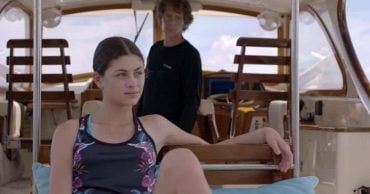