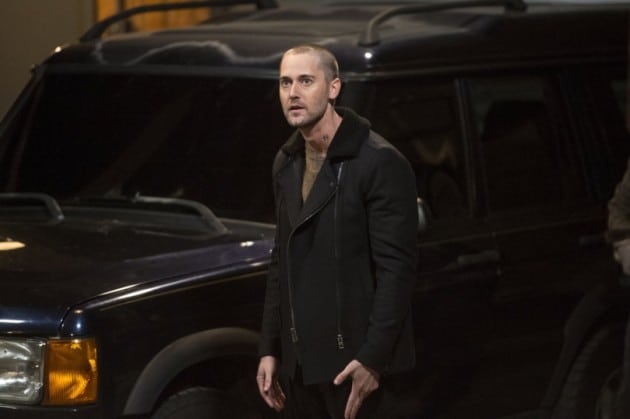 Wow. The Blacklist put forth one of its strongest episodes to date this week. It was smart, action-packed, and still contained plenty of drama and character exploration. I’ve always liked this show, but now I just can’t get enough.

This week on The Blacklist: Ressler and Reddington head overseas to track down Tom Keen. Elizabeth makes one final, private appearance before a judge, and has an argument with Agent Cooper. Harold has a health scare, but it’s other things that he should be scared of. The trial concerning Harold and Elizabeth comes to a dramatic conclusion.

This week’s episode was masterfully done. Everything from the dramatic elements to the action sequences was well-crafted and certainly worth watching. Sometimes, The Blacklist can get caught up in its action sequences and forget to reach its dramatic peak. This week, however, the show found the perfect balance. I just love it when a show can take its characters to emotional places, while not forgetting the major forces of the show.

After a few weeks of sitting on the fence about all things “Tom Keen,” I have to admit that they handled his story masterfully this week. Ryan Eggold has done some excellent work on this show, but Season 2 has largely felt like a “well he’s under contract, so..” kind of story. However, the way that they reached back into his Season 2 story and tied it in with everything going on felt right. It feels right that he was resistant, but that he eventually came back. I always got the impression that he loved Elizabeth, and that was his one mistake. All in all, Ryan Eggold deserves some serious kudos for his work.

One of my favorite scenes in this episode was Tom’s discovery of Ressler and Reddington in the vehicle that was supposed to contain a shipment for Tom’s new cover. Tom’s face was priceless, and it had to be one of my favorite scenes in the show to date. Tom, of course, gets away, but not before he has to join Ressler, Reddington, and Dembe in a fight against the cartel he is working for. In any show, I love pairing characters who don’t always get to interact, or in this case, mostly loathe each other. Just a really fun scene for me, and one that I thoroughly enjoyed watching.

The Blacklist continues to enthrall me with the way that it tackles the gray areas of morality. Of course, any human being knows that the world isn’t black and white, but shows that acknowledge that fact constantly gain greater respect from me. The Blacklist is one of those shows that is always hovering in the moral gray areas, and it’s just so compelling. Personally, I tend to side with the judge in real life. I won’t get too political, but I think government transparency is important. I honestly couldn’t say how I would have handled a case like this, though. When the Assistant Attorney General squashed the case, I was satisfied. Sure, I’m probably just rooting for the characters that I care for, but it really makes you think about things like this happening in real life, doesn’t it? What kind of stuff has the AG’s office squashed in the past, before it got out? I doubt that the writers have a particular advantage in writing from inside the government, but it’s an interesting concept nonetheless. Shows that challenge our positions on things are good for a forward-thinking society. Bravo!

Before I wrap up, I just want to spend yet another paragraph raving about James Spader. I mean, I talk about this each week, and each week he tops his previous performance. A character like Reddington can be so complex, but Spader seems natural about it all. He can make you laugh out loud and simultaneously gasp all in one small scene. Then this week, when he gives Elizabeth her little pep talk about taking care of the harbor master’s daughter (and all the while revealing details about his relationship to her?), he showed such emotional depth. Going back to morality, in real life, someone with Reddington’s track record would never earn your sympathy. However, I really felt for him. I nearly broke into tears because of Spader’s performance. It was beautiful.

Just a job well done to The Blacklist this week. I loved the story, the performances were nuanced, and I was gripped the whole way through.

What about you? Did you enjoy this episode as much as I did? Let us know in the comments!