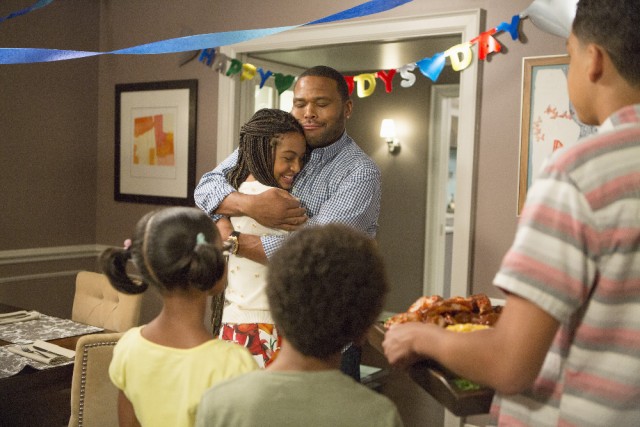 “Daddy’s Day” presents itself as a typical episode of Black-ish: Dre throws himself into a frenzy over something, and the rest of the family has to deal with the fallout of his insane attempts to prove his righteousness. This approach is one with inconsistent results for Black-ish, though the distinction comes between seasons. While Season 1 was too squarely focused on the results of Dre’s behavior, Season 2 has used the conflicts Dre creates to explore the generational gap between parenting units of the Johnson family, and in doing that, has allowed for the societal reflections the show prides itself on to rise to the surface in a more organic way, changes “Daddy’s Day” directly benefits from.

On the surface, “Daddy’s Day” is the most straight-forward episode of the season so far. The opening monologue immediately establishes the lowered stakes of this episode, compared to the life-and-death issues of the two previous installments. “Daddy’s Day” is simple: Dre thinks Father’s Day cowers in the shadow of Mother’s Day, so he wants to have a better holiday celebrating fathers, far away from the massively over-sized (in his mind) celebrations of mothers when that Sunday in May rolls around every year. So he goes about trying to set up a corporate-friendly holiday where he can be worshiped and lauded with “top shelf” gifts – you know, the kind of self-serving, slightly consumerist behavior Dre is widely known for after two dozen episodes (let’s not forget, he bought a gun with the primary purpose of keeping his shoe collection safe).

“Daddy’s Day,” however, is something more than another story about Dre being Dre: it’s a reflection about the value of a father in someone’s life, and how modern life has redefined what it means to be a “good” father. Tapping into Dre’s issues with his own father’s parenting helps set the table for this story, which introduces Zoey’s friend Zendaya (who has no father in her life) to explore the complicated nature of fatherhood. Dre’s father might not have been the best – Dre openly talks about Pops beating them when he would be around – but his occasional presence at least provided some value to him growing up. If anything, it at least provided Dre with an example of the kind of partner and parent he didn’t want to be when he grew up, and it doesn’t excuse him from being a deadbeat father. “Daddy’s Day” doesn’t back away from this reality, either, addressing both the racial and social constructs that lead to the dichotomy of how differently Zoey and Zendaya appreciate Dre as a father in their lives.

With all that, “Daddy’s Day” even manages to sneak in a fun subplot where Junior openly worships his mother, to the point Bow becomes uncomfortable with the whole situation (leading to a killer final line from Jenifer Lewis: “Now he’ll never kill anyone for you”), a rare example of Black-ish juggling two fairly independent storylines without having to tether them to the same moral at the end of the episode. Ultimately, both of these stories find themselves on the lighter end of Black-ish‘s spectrum, neither the ‘deadbeat dad’ or the ‘Oedipal mom worship’ proving to be particularly revelatory in any way. In a way, it works better for the episode: “Daddy’s Day” is at its best when its making small, subtle reflections on the nature of fatherhood, and how it’s changed in the last forty years – and of course, when it has Junior obsessing over how difficult his mother’s life can be. Not every episode needs to be a Special One, and “Daddy’s Day” reflects that sentiment: it can be quietly poignant without having to openly pander to a specific view point, an important facet of maintaining (and expanding) Black-ish‘s overall appeal.