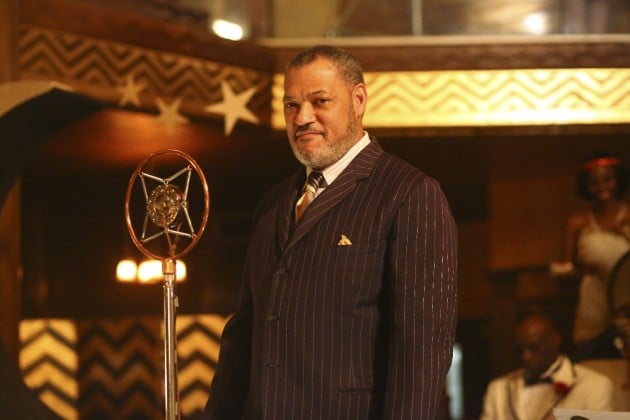 “Pops’ Pops’ Pops” is the first episode of Black-ish I can remember that hits the ground running, and never comes close to slowing down. Framed around the youngest Johnson children asking Pops for help with a family history project, “Pops’ Pops’ Pops” is a completely left field finale, putting down the histrionics of Dre and the consistently underwhelming examination of American culture for a fun, weightless little vignette acting out Pops’ narration of the Johnson family influence on the nation around the turn of the century. The most noticeable thing about the episode is how fun it is, how effortless it all feels when the story is taken away from Dre and delivered by Pops, the show’s most entertaining (if inconsistently appearing) character.

The lack of the typical in-family vitriol is a huge boost to the episode, too. “Pops” is an episode that is very light on story (at least story that matters; there’s a convoluted little tale about an ice boy, a club owner that’s played by P. Diddy, and a lounge singer portrayed by Mary J. Blige in the flashbacks that follows all the predictable beats) but very heavy on cast interaction, pulling its humor from its sepia-toned setting and costumes, elaborately designed to look like the Roaring Twenties. With the bickering rate turned way down, “Pops’ Pops’ Pops” gives room for Pops to tell his over-the-top story, injected with the typical family pride most family patriarchs embody; he’s not afraid to proclaim his descendants invented jazz, texting, and break-dancing, as long as everyone sits around to hear the glorious story of how his parents supposedly got together in the 20s.

It’s an experience we’ve all had as a family: inquiring into the past with older generations always leads to long-winded stories that trail off into random tangents, get broken up by family comments, and generally feel like they might be a little more exaggerated than the storyteller is willing to let on. Pops is certainly one to talk, and the increasingly outlandish claims he makes about family members is a fantastic little device to emphasize the absurdity of the flashbacks, which feature the members of Dre’s ad agency working at another, more traditional small business with a “KKK” abbreviation for a name, and other ridiculous touches like the break-dancing contest at the end (which was cliche, but acceptable) and Diddy’s insecurity about how he looked in his suit around the other people in the speakeasy (him calling Dre “a**  boy” instead of “ice boy” is a great little touch, as well).

Again, the word I keep coming back to is “fun”; often, Black-ish‘s attempts at having a good time have felt forced, tacked onto the ends of unpleasant episodes where insults are flung in high-pitched voices and a whole lot of selfish miscommunication ends up wedging itself into some larger perspective about race or culture. But “Pops’ Pops’ Pops” is nothing but fun, taking moments aside to make its points about race, which, although they aren’t that original, are executed perfectly; just look at the conversation between the office characters about the use of the word “negro” (which is explained as “in that time period,” but also speaks to current situations we’ve seen play out in the news and other forms of media throughout the world).

When Black-ish isn’t forcing Dre’s agenda down our throats, there’s room for other characters to talk and other stories to develop, and though “Pops” is just a fun way to spend a season finale budget, it does so in a way that brings the Johnson family together like no episode has before. There’s ribbing between family members instead of ugly, lasting conflicts, lots of laughs and rolled eyes as Pops ups the ante on his own fibs,  and, of course, the kids dressed up and acting in the flashbacks (yes, even Junior was great). Somehow, “Pops” is able to rein all of this in for a devilishly fun story about the value of heritage. If anything, Black-ish‘s finale gave it a new perspective on ways to tell its story. I may not need every episode of Season 2 to feature period homages like this, but “Pops” displays the emotional tenants and cast chemistry so sorely missing in the rest of the season set in the present, something the show should pay attention to when it begins breaking stories for its second season in a few months. “Pops’ Pops’ Pops,” ultimately, is about heritage, and there’s nothing that has captured an aspect of family traditions better than the final scenes of this episode, with the Johnson family just hanging out on the couch as Pops finishes his story, and Ruby begins her own. A terrific end to a tumultuous, often disappointing season.