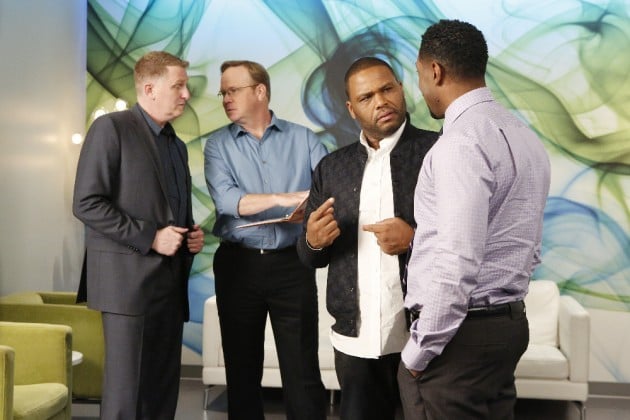 Caricature can be a powerful comedic device, in the right hands: however, Black-ish‘s utilization of slapstick humor and over-the-top characterizations haven’t worked, mostly because the show forgets to put humans underneath its silliness, and never allows any of its ridiculousness to catalyze anything meaningful. “Switch Hitting,” like the show’s first episode, is mostly concerned with Dre re-establishing his own “blackness” to a white man – and by the end, “Hitting” has Dre dressed up in a similarly off-putting, racial “costume” in the third act to over-accentuate his point. Unfortunately, this isn’t just an example of Black-ish returning to the same well of humor to lesser effect: it really just shows how little Black-ish has learned since its first episode aired nearly eight months ago.

“Switch Hitting,” like many episodes of Black-ish, wants to purport itself as an Important, Forward-Thinking comedy, yet it spends half the episode flaunting a painfully unfunny Michael Rappaport guest appearance, portraying the only 50-year old man in the history of American business to try and appropriate street language as his own. Somehow, this makes Dre feel white: the man’s racial insecurities aside, the fact he’d start to collapse under the teasing of this idiot is beyond me, something the script only justifies by throwing another over-the-top character at the audience, Charlie, who really just serves a jumping off point for random jokes and finger-pointing humor. “Look at how funny that homeless, seemingly uneducated black man is!” is essentially the punchline when it comes to Charlie, and “Hitting” leans in heavy on this, trying to present him as some kind of competition to Dre, sending him spiraling into one of his self-righteous journeys to reclaim his blackness through stereotypical fashion (this week, it’s buying a pit bull, wearing a basketball jersey over a polo, and wearing a gold dookie chain… are you serious, Black-ish?).

And from there, it’s a straight downhill shot to the bottom: “Switch Hitting” ultimately reveals that Black-ish isn’t a show about a black family being proud of their heritage; it’s about a family that only understands their heritage through stereotypes, only embracing it when Dre feels guilty about abandoning some pre-conceived notion about his own racial identity. That confusion, that unnecessary guilt, is never something “Hitting,” nor Black-ish as a whole, takes seriously, and while I’m not necessarily saying that show would be much better, there’s at least some of the pathos that Black-ish always pumps itself up to be in the first act of episodes, yet usually abandons in the final third for ludicrous humor and annoying Dre behavior.

“Switch Hitting” is no different; it sweeps what appeared to be a fun B-story about the kids doing a project together (they work together because Bow screams at them to, a very healthy portrayal of her mothering skills) under the rug for extended scenes of Rappaport’s embarrassingly unfunny “slang” voice, featuring some of the most awkward, forced dialogue I’ve ever heard, desperately trying to be funny with tired references, only existing to throw Dre into one of his superficial identity panics that Black-ish oddly desires to make its forte. The conclusion of “Switch Hitting” is probably the episode’s most thoughtful – Pops applauds Dre’s ability to “live in both worlds” – but it’s unsupported by the material behind it, which just showed a Dre who didn’t navigate between the two worlds (which, isn’t Black-ish‘s whole philosophy that these two ‘worlds’ have combined into one?), and pandered around in blackface to a white man because he precisely couldn’t find that balance.

It all makes for unfunny, unsettling, and tone deaf television, comedy so poorly constructed that even the return of Laurence Fishburne – who literally appears out of nowhere at the kitchen table halfway through – can’t help it (though his story is just about how he evades taxes; how nuanced, Black-ish). If Pops can’t bring some life to the episode, you know things are bad for the self-congratulatory ‘comedy.’