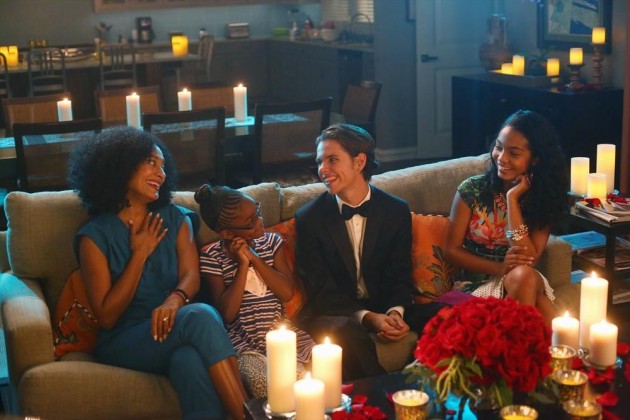 Often, the key to Black-ish is how the show channels the manic rhythms of its protagonist, Andre: when an episode falls too far into high-pitched slapstick, things can get ugly quickly. When the show channels that energy, however, and marries it to the underlying family comedy beneath its racial commentary, there’s often something to be found there – something “Andre from Marseille” discovers midway through the episode, when things take an unexpected twist. What it leads to is probably the most satisfying episode of Black-ish yet, a welcome bounce back from last week’s misfire.

Initially, it appears “Andre for Marseille” is heading directly into troublesome waters when Dre finds out Zoey’s first boyfriend is white. As expected, this sends Andre into a panic, unable to reconcile that his daughter’s first boyfriend is a white Frenchman (who also has the same first name, a double shot to the gut), no matter how impressive he might seem to be. Early on, the show sidesteps any problems by creating a gender-based conflict within the house; the ladies of the house find Andre quite endearing, be it his philanthropic ways, or the compliments he lays at the feet of Bow (who is struggling with a personal discovery that has her feeling old). That alone makes for great comedy, with Dre Jr. completing simple social media tasks to win his father’s affection, and the boys taking turns trying to grill Andre and break him down.

Slowly, “Andre from Marseille” reveals itself to not be about race at all; ultimately, “Andre” determines the problem Dre has with his daughter dating Andre has nothing to do with him being white. As the opening scene establishes, Dre considers himself to have a “special” relationship with his daughter (aka she looks up from her cell phone when he talks once in awhile), and her starting to date only forces him to face the realities of his daughter’s maturation. He has to face the facts of letting her go – which makes it even harder not to react when he finds out Andre broke up with her because he thought she was shallow.

What began as a story about Dre dealing with a white boy in the house begins to build out and become much more: Dre has to realize that he himself is a shallow person, ready to dismiss Andre simply because he’s white. Ultimately, Zoey could bring home Dre himself and he wouldn’t be happy with it – he’s going to hate whoever she dates, and trying to unnecessarily attach meaning to that hatred is only going to come at the cost of his relationship with Zoey. While simple (and conveyed in equally rudimentary fashion, when Zoey brings home a mini-Dre), the story is able to defy convention and become something other than a simplified farce about generational differences in regard to interracial relationships. Instead, it becomes a meaningful story about maturation; about Zoey’s maturation forcing Dre to grow up a little, and realize he not only needs to stop attaching race to every situation in life, but also let his daughter grow into the person she wants to be, even if that means she’s shallow and dates guys with really strong kick games.

The theme of maturation takes a much lighter, though equally personal, tone with Bow, who makes a startling discovery “beneath the Mason-Dixon line” and worries about aging. This story is much more straightforward, but it informs the other episode in a subtle, indirect fashion that quietly allows the two markedly different stories to work well next to each other. Plus, it’s filled with a series of clever puns involving genitalia, which is always a mine for big laughs, something Black-ish taps into with the wide-eyed panic of Bow trying to fight back the hands of time, then realizing that there’s really no point to it at all.

There haven’t been a lot of strong examples of Black-ish turning its premise into particularly meaningful storytelling; by subverting expectations based on said premise, “Andre from Marseille” is able to tap into something much more lasting and meaningful, bringing a new wrinkle to a core relationship within the family, making Andre’s high-volume panic the avenue to something truly rewarding.