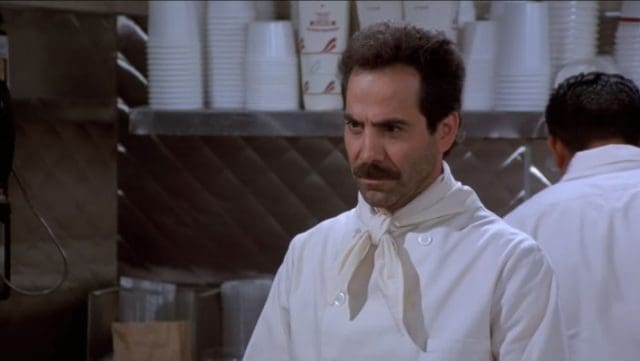 I think it’s safe to say that any day Andrew Rea comes out with a new episode on Youtube channel “Binging with Babish” is a good day.   But when he decided to take on the show Seinfeld I knew it would be a special day.  And Rea decided to go after one of the best episodes ever in “The Soup Nazi.”  Here’s Rea’s interpretation of his video and the show:

Perhaps one of the most delicious food plots of the 90s, or any decade for that matter, hails from a lesser-known sitcom called ‘Seinfeld’. This scrappy little American comedy featured a so-called “Soup Nazi”, and while you might not recognize his signature catchphrase “No soup for you!”, hopefully you can tell by now that I’m joking. Join me as I take my best crack at his wild mushroom soup, Elaine’s muffin tops, and Jerry’s aptly-defended cinnamon babka.

As you can see it’s not just Soup Nazi food we’re dealing with here.  Can Rea create those special muffin tops and babka (another babka?) that were featured on the show?  Check out the video below and find out.