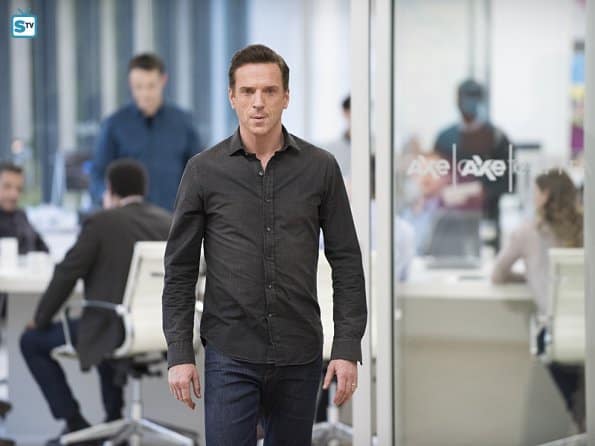 When a man is drunk, and drives your kids home drunk, it is both fair and understandable to be angry. It’s even justifiable to drive over to his house, and beat his stupid ass, because if a man that wealthy can’t understand how to call a driver, they might need a little negative reinforcement.

However, there is a reason we as a society strive to evolve past that sort of violence; namely, because of the ‘tit for tat’-ness that is hardwired into human behavior. A punch leads to another punch; a kick leads to another kick; one confrontation between two men balloons into something much larger, and out of control. Violence begets violence, always and forever, and nobody knows that better than Billion‘s Bobby Axlerod.

The most interesting thing about Bobby Axlerod is that he wasn’t born into money. He was poor; dirt poor, even, and while Lara grew up more middle-class, they both grew up tough. That punch that Bruce Lanier so deservedly took to the jaw was a remnant of a Bobby Axlerod long, long dead; that threat to kill was an echo of a man who’d long since purposefully filed off all his sharp edges. Axe, almost immediately (and even if he can’t quite make himself say it) regrets the outburst. He knows that it was wrong, and he knows that he’s spent his whole life trying to get away from it.

Axe doesn’t romanticize the hardships he went through; they simply occurred, and are a part of him, as much as anything else. But the rich pups in his office do. They love it. They think it’s appropriate to bring in a trophy for Axe breaking that dude down. They want to tough talk about how they’re going to knock their competition on their asses; but what they’re really talking about is them making millions of dollars. There’s no real tough talk in a hedge fund! They’re all well-compensated, and pampered, and spoiled; it’s high pressure, sure, but they’re all making at least mid-six figures. Wags doesn’t talk to the hedge funders in that vulgar way because it’s who he is at his core; he does it because he knows that they think of themselves as warriors, and tough guys, and need to be motivated as such. He and Bobby don’t really talk to each other that way, or at least not very often.

But even Axe, who uses his hardscrabble past to motivate him, has forgotten the depths of where he came from.

Have you ever played pickup basketball before?

Every person who has ever played basketball with the friends has had a game or a stretch of games where they can’t miss a shot. They get into a zone, and the ball tracks for the basket from any and all angle and distance, and they achieve a closer relationship with God. The sun might even shine right upon them.

And then, of course, it all closes. The forty footer you’ve been making all week? Good luck making a layup, you useless sack of flesh. Good luck dribbling with those fingers, you lumbering brute. The world hates you, and will hate you until you find your sucky equilibrium. And then it starts all over again.

The reason is, you see, that the foundation in which your basketball prowess has been built upon is made up of mathematical chance. The only reason we get hot is because it’s literally impossible for us to not to be at some point. The moron from Computer Science who just hit six threes in a row, even though he can’t hold onto his stupid thermos, is a mathematical trick. Somewhere, someone with no basketball skills at all is going to hit shots.

But then you look at someone like Steph Curry.

The reason he shoots and rarely misses, even with the best athletes and basketball minds trying to stop him, is that his basketball foundation is built upon the deflated bones of a million, million jump shots. Every thirty footer that cuts through the rim like an Olympic diver is based up on years and years of practice. It takes hard work, and routine, and discipline to build that foundation. You can’t shortcut it with taking a thousand jump shots at once; you can’t shortcut it by lifting weights for ten hours one day. It’s a process.

This is what Lara isn’t getting about her children, and their spoiled behavior. You don’t dump someone who can’t swim in the Atlantic Ocean, and you don’t make someone who just had a personal chef make their meal forage for their own food. You make them clean their room; you make them do the yard; you make them do book reports on books they don’t like, just for you, so that they can’t learn to do what they don’t like to do to get ahead. Lara wants them to forage for clams, because she doesn’t want to take the time to rectify a decade of mistakes. She’s trying to build her kids a strong foundation all at once, and they reject it, because they feel it shifting as much as she does.

There are no good guys on Billions; and the more I watch, the more I start to suspect that Chuck Rhoades might be the worst of all.

This man uses the rape of Martina Slovis as a weapon against Spiros; he wraps himself in the pain and the hurt of the middle-class to sell his involvement to Bryan, who is starting to come into his own. Chuck doesn’t care about those people. He cares about the power he wields, and wielding that power against Bobby Axlerod. Chuck will literally burn down the entirety of his marriage, and his friendships, and his office, just so that when the ashes have settled and the fire extinguished, he can stand over the fallen Axe. Chuck was raised by a slumlord, growing up with privilege and power that wasn’t his, and in his rich-boy guilt, became one of the most powerful men in the state. Chuck is searching for conquest, so that he can wash the bad taste of his mouth.

Bryan is already losing a little bit of his integrity by including Chuck in these proceedings. Chuck wants this too much, will do too much; Chuck will build this case on a foundation of sand, and the case will fail, and he’ll lose future leverage. Chuck wants the shortcut, because he can’t stand to wait any longer, and it will cost him everything.

Bryan is in the best spot he can possibly be in, really. He’s just high enough to drop the hammer, and just low enough on the totem poll that he doesn’t have to duck out of the way. If he could keep Chuck at bay, and do his job, he could do great things. But he’ll eventually ascend to the top spot, and he’ll find his bugaboo case, and he’ll try to con an idealistic underling into doing his bidding, and he’ll end up on the wrong side of the mirror, staring at the world he left behind.

Axe goes to camp, and rescues his kids. He realizes the futility of both them being there, and him picking them up, but he can’t help it. He needs the win, and the admiration, and he needs to be in control. He doesn’t actually care that his kids are street smart, because that would require real change from him as well (this is Lara’s problem, too). Axe can’t teach his kids to be less spoiled and more appreciative, because he’s forgot what that feels like. He’s polished off the rougher edges, which is good; but he’s also convinced himself that he remembers what it felt like to get cut by them.

When a man can make something as serious as an assault charge vanish with a bag of money and a nice Italian dinner, he’s past the point of wealthy, and has fully internalized his privilege. Axe hates the violence that’s a part of him, but he’ll laugh at the YouTube clip when he’s won for good. Axe may still remember where he came from, but he’s becoming more and more like those he despises with every dollar he makes.