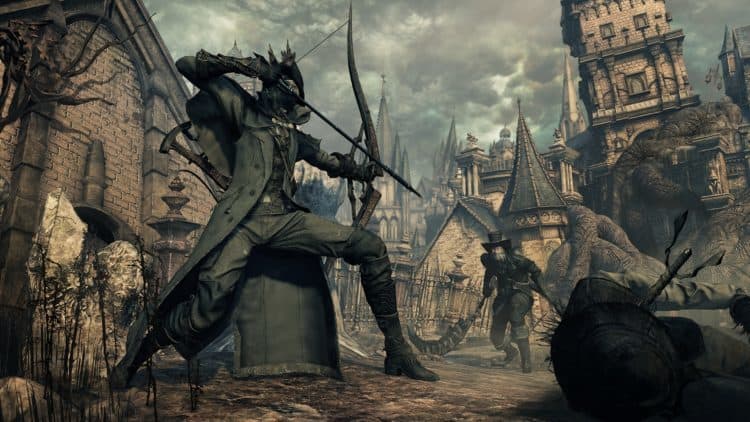 If you’re a PS4 fan of action RPGs, chances are you’re probably already obsessed with Bloodborne. If you’re not, at least you know about it. Bloodborne is a PS4 game set in the Gothic and Victorian inspired city of Yharnam. A blood-borne disease has infected this entire city, and upon playing this game, you become part of the Hunters. You’re goal then is to find “Paleblood,” but to get there you’ll have to destroy all the infected bestial beings that come along your way. This requires weapons, and Bloodborne has plenty to go around. These are the top five Bloodborne weapons in the history of the game.

This weapon is one of the game’s hardest-hitting weapons. You can use this to open up your enemies and do some real damage. You can also use this without sacrificing your health. It also happens to be one of the coolest looking weapons of the game, being that there aren’t that many sword options in Bloodborne. You can obtain this great sword by purchasing it from the Hunter Dream Messengers after obtaining the Radiant Sword Hunter Badge.

In addition to its cool name, the Blade of Mercy is one weapon that’ll let you slice and dice your enemies quickly. In fact, you can commit to kill your enemy without having to stop. This is a great weapon of choice for those quick movers on the game. You can obtain this weapon by helping or killing Eileen the crow, which will then result to you obtaining the Crow Hunter Badge.

While numbers may say that Chikage is the best weapon in Bloodborne, it’s a bit difficult to use this weapon consistently. It also drains your health as you use it, which is a disadvantage. This katana has tremendous power to make your ranged capabilities better and make your melee weapon more formidable. You can obtain this weapon by kneeling before Annalise and speak to her about joining the Cainhurst Vilebloods.

This quick hitting weapon is just another starter weapon, but you can easily finish the entire game even with just the threaded cane alone. You can whack enemies and dodge right away, making this weapon really effective against many enemies. After a few upgrades, you can turn this starter weapon into a real force to be reckoned with. It’s also one of the easiest weapons to use in the game, and you wouldn’t even need to do anything to obtain it because it’s one of the three selectable starting weapons in the game.

This dependable, well-balanced weapon can get you through Bloodborne with no problem. You can deliver damage with the Saw Cleaver even against really agile enemies. It has a move set that improves over time after upgrades and transformations. It may not be the most versatile weapon, but it works well enough to be useful for a lot of the game. The Saw Cleaver is also one of the three selectable weapons.