Home
Television
Banshee
Banshee Season 3 Episode 8 Review: “All the Wisdom I Got Left” 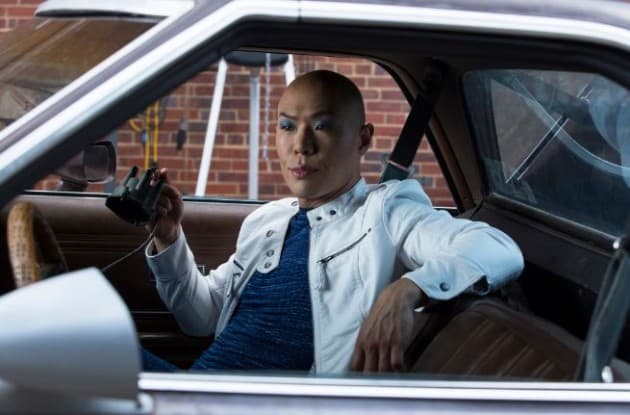 The past is a funny thing for the characters living in the purgatory of Banshee, Pennsylvania. While it’s something most only remembered in fragments, it’s very much the things that define them. These are not people embracing the future or looking ahead with bright eyes; the people of Banshee (and on Banshee, in general) are there because they can’t let go, because they won’t stop fighting against the karmic wave constantly threatening to overtake them for their perceived sins or slights. They all have a very elastic relationship with time; the farther they get from their past and the less they recognize the person who lived that life, the more they realize they’ll never truly escape from who they are, or what they did. In the end, it’s all about how you define yourself by your successes, failures, shortcomings, and talents – and it’s that personal obstacle, the final step in inner peace, that keeps anyone from leaving Banshee, even if it takes them away physically.

That internal conflict is the foundation of “All the Wisdom I Got Left,” which elevates the past lives of secondary characters in order to inform the journey of its larger players. It’s an approach that often leads to ham-handed results on many shows; unless you’re talking about Chayton’s fists, that verbiage doesn’t apply to Sugar’s quest to make amends for the past, which brings new found depth to both him and Job in one of the season’s most rewarding little stories. It could earn that title alone for Job kicking Oscar Jr.’s butt in his most ridiculous outfit of 2015 (so far; he’s got two hours left to top it), but how the show uses the blossoming friendship between the two, to turn their playful exchanges serious for a moment, breathing life into two characters who are often amusing, but don’t usually have the same weight as the people they surround (Job going back into get his money was a real emotional moment – or maybe I’m just way too into this show sometimes).

Hood chasing Chayton was equally satisfying, an extended chase that tipped its hat to everything from mixed martial arts to the knife fights of Eastern action films, with some dashes of Western thrown in between – and a boxing metaphor (the “ring” being the French Quarter; like a boxing match, Chayton and Hood both know they have nowhere to run) as a cherry on top. Although it’s not the fever pitch climatic moments of “Tribals” or other episodes this season, the chase through NOLA is effectively nerve-racking, right up to the final moments, when Hood responds to Chayton’s comment about removing the life from Siobhan in the way most of us would expect him to, especially knowing he has a loaded shotgun in his hands dangerously close to Chayton’s body.

Chayton doesn’t go out with a whimper, either: what separated Chayton from the rest of the Banshee world is how he embraced his past to the fullest, the complete opposite reaction that Hood, Carrie, and many others have when faced with the people they used to be (or the lives of those that came before them, like Rabbit with Carrie). Chayton always saw himself as a warrior, a self-definition he applied to any context, without compromise. As Stowe points out to Carrie later, Hood’s conflicted (he mistook internal conflict for “rust,” but make no mistake) nature doesn’t allow him to commit to an identity the way Chayton did, and it makes the dichotomy between them even more powerful, even as the show’s saying its latest farewell just a few moments later.

And now, it feels like Banshee is setting up a big, big shift for the end of the season. Given the behinds-the-scenes news about season four (eight episodes, moving shooting to Pittsburgh), it makes sense that there’s all this talk of leaving town and dealing with Kai for good; it appears Banshee may be preparing to enter a new age after its final two hours of 2015, most likely in a new place, with Hood talking about leaving and the wrath of Col. Stowe about to present a real convincing argument why he should make good on that promise. Though Chayton’s been the Big Bad this season, Kai and Stowe have served as secondary foils, the latter in particular, as the show’s grown Kai into a slightly more sympathetic person (I mean, we at least felt bad he got kidnapped at his christening, amirite?). But Hood and Proctor still have their differences to settle – after all, Brock (who is really staking a claim for MVP of the season; he’s become a fantastic comedic foil) did convince him to come back to Banshee with the mention of Kai – and Stowe is pretty angry about all that money gone missing; even though lots of “All the Wisdom” feels like season-ending material, there’s still two hours left to fill, leaving the shattered nucleus of Banshee PD understaffed to handle the whirlwinds about to hit the strange, seemingly cursed town.

“All the Wisdom I Got Left” is another achievement for Banshee, as the show slowly morphs itself into its own twisted version of Hood, able to assume any dramatic identity and deliver an exciting, thoroughly unique story out of it, topped off with fight/chase scenes that stack up against the best (and most creative) found on any screen, large or small (watching Antony Starr and Geno Segers’ faces as they tossed each other around their hotel room is a reminder that this show isn’t afraid to make its actors do stunts, which is always refreshing). There aren’t many shows that have such a grip on their own identity, that can morph into others on a moment’s notice, without losing a beat: it’s made for quite an impressive, consistently unique third season – and more importantly, has quietly entered Banshee in the conversation of “best show on television.”