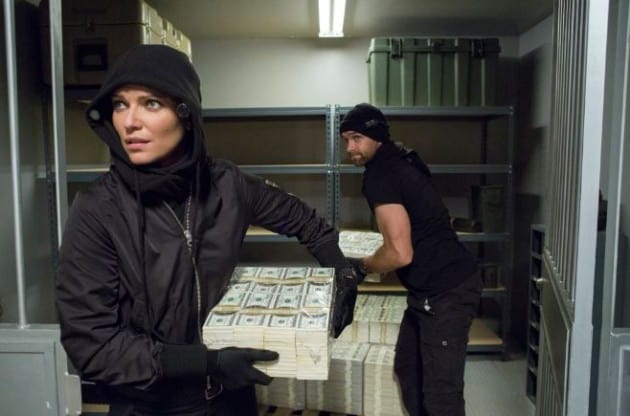 Banshee refuses to take a breather in its third season with “You Can’t Hide from the Dead,” an episode that opens with some particularly haunting imagery, and only gets better from there. It builds from those opening images, slowly pushing the camera closer and closer to its characters until the 29-minute mark, when the episode transforms and we find ourselves inside the heads of Team Banshee on their trip to Camp Genoa.

It’s impossible to talk about anything in the episode without first addressing the center piece: the heist sequence takes Banshee‘s technical mastery (and visual creativity) to a whole new level, filming a complicated set piece from cameras mounted on the heads of Job, Carrie, and Hood, putting us simultaneously in Sugar’s position from the van, and inside the minds of the world’s best team of thieves. A powerhouse of tension and near-incoherent movement, “You Can’t Hide” somehow manages to make all that first-person footage make coherent sense to an audience, even while we’re watching Job get into a knuckle-busting fight with one of the camp’s military personnel, or when Hood and Stowe are duking it out near the escape hatch.

There really aren’t enough superlatives I could attach to this scene to do it justice; needless to say there’s never been anything like it on television before, a quote that is quickly coming to speak for Banshee‘s identity. Because even as it builds to the big heist, “You Can’t Hide” is haunting Chayton and Hood both with visions of Siobhan’s ghost, and challenging characters to understand who they are before they’ve lost themselves, a challenge that continues to permeate Banshee‘s world as characters reflect on the deaths of Siobhan and Kai’s mother. Each character in Banshee has reached crisis point: Rebecca is trying to branch out from Kai with some dangerous Salvadorians, Deva finds herself attracted to violence, and Chayton experiences a bit of human kindness… each scene in “You Can’t Hide” is a direct challenge to each character’s assumed identity – gangster, primordial killer, bumbling/drinking politician – bringing to light the deep personal chasms many characters feel.

This is exceptional material that is overshadowed by the technical masterpiece at the heart of the episode, which only furthers the festering idea that these people are not who they are pretending to be. Hood is obviously not a cop, Carrie is not a boring waitress, and Chayton sure isn’t a decent human being; as soon as they drop those pretensions and faux attempts to assume other identities, “You Can’t Hide” forces characters to realize they can’t run from themselves (something the pastor at Leah’s funeral gives voice to, before Israel reluctantly – and emotionally – welcomes his son to the burial). Chayton’s become a monster, something he may not even realize at this point, terrorizing poor Susan Misner from The Americans after she helps him with his infected bullet wound (and even gives him a car!). These are all people acting on instinct at this point – which forces their true selves to come to the surface, an internal conflict Banshee has built its foundation around, and slowly brought each character into the fold with.

“You Can’t Hide” may not reach the dramatic highs of “Tribal,” or have the heart-breaking images of last week’s alternate-reality flashbacks; but it’s as evocative and powerful as any episode in the series, another fine example of just how Banshee has elevated itself into the upper echelon of TV shows. We even get some signature butt-kicking when Carrie and Gordon take on Deva’s idiot friends at their fight club house party; there isn’t a scene or moment wasted in “You Can’t Hide,” which continues to force a crisis of identity on each and every character in its world, even in its quietest moments. There is nothing on television like Banshee, and “You Can’t Hide from the Dead” is fully aware of this, putting on a technical showcase without sacrificing the nuance of the script beneath it, in any way shape or form. This episode might not reach the dramatic heights of “A Fixer of Sorts” or “Tribal” – but it’s an episode that stands confidentially among them, another impressive hour as TV’s first true contender for the crown in 2015.