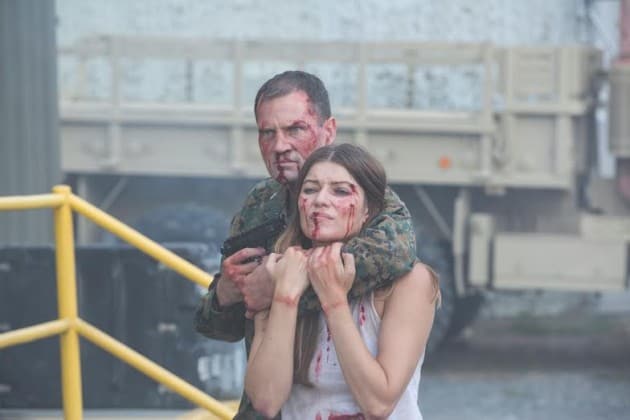 Banshee is a show about people stuck between who they once were, and who they want to be. A former crook trying to be a mother and raise the normal family she never got to have, an old boxer and thief who becomes a bar owner, an Amish girl trying to become a gangster, or a disgruntled military commander and criminal trying to be a caring lover: everyone in Banshee, particularly in this fantastic third season, have faced a crisis of identity and decided who they wanted to be. Some people paid for that decision: Siobahn and Gordon’s respective deaths may occur in very different situations, but the conviction of character that preceded it proved these people had figured out who they really were – and with that knowledge, no longer lived with the fear of death in the back of their minds (RIP Nola, a woman who knew who she was more than anyone).

The title “We All Pay Eventually” is a direct reference to this journey: no matter what identity we try to assume, the mistakes of our past selves always, always come back to haunt us. Shoot, all of Banshee‘s first two seasons is Hood’s old life coming back to consume him once and for all, a revolving door of old nemeses that gave great definition to the man Hood was – or more importantly, the man Hood was trying to be, the one who saw himself living in that quiet country house with Ana for fifteen years. The end of Season 2 was about Hood finally letting go of that – which, as healthy as it was for him, set him existentially adrift, clinging to his blossoming relationship with Siobahn as a tether to his own identity as a human being, even though she didn’t really know who he was until right before she died. He needed Siobahn to give his life purpose in the wake of him and Ana parting ways; Hood couldn’t run away from his personal transformation all these years, and we watched him pay the heavy emotional consequences from it.

Banshee‘s third season finale is obviously an episode about these consequences that can stem from a crisis of identity: but it’s not just about the events of Camp Genoa, and how that comes back to bite them. Rather, “We All Pay” reinvigorates its passion for the past, detailing another time when Hood was stripped of everything he knew he was (in this case, a kid who killed his abusive father and beat his lieutenant in the military), and was rebuilt again in the image of something different, something Hood was convinced he wanted to be (we get the first appearance of the almighty Dalton that Hood and Job erased their identities from, an exciting direction I hope the fourth season embraces). Brought to that dark room by his actions, Hood was faced with deciding who he wanted to be – and while I’d argue he still has no answer, he certainly knows he wants to stay alive, and is willing to do anything to make that happen.

Those flashbacks begin to resonate deeper and deeper as the episode continues: and in the few moments where “We All Pay” lags (why do Hood and Gordon get stuck for so long on those two shooters? That back-and-forth went on foreverrr), it never loses sight of that difficult journey of reconciliation every character on Banshee struggles with. Kurt Bunker’s background is a strong example of this: his story beats aren’t anything extraordinarily unique, but he already feels like a fully fleshed-out character, someone we can relate to in the context of the show. Like everyone else (even those dead, like Alex Longshadow), Bunker is trying to figure out who he really is – the problem is, those who tend to know who they really are turn out to be the most evil, a fact Bunker is desperately trying to run away from.

But alas, none of them can: the inner conflict is what makes these people so likable, their inability to resist temptation so endearing. Like us, the players of Banshee are constantly fighting the forces of light and dark, the latter of which always seems to run just a little bit deeper than we expect. The “bad guys” of Banshee, the Stowes, Proctors, and Brantleys of the world know exactly who they are: they’ve embraced the darkness within them, and display a conviction of self that our main players lack. It’s what makes them such admirable adversaries, even on a show where the main characters are borderline superheroes: they have an inner conflict characters like Chayton and Rabbit lack, a concrete ideal of who they are that makes them all the more dangerous. Knowing who you are and what you’re capable of is a gift and the curse: and as the dust settles around Genoa, and Ana holds onto Gordon’s dead body, is an internal debate each of the characters in Banshee find themselves facing (summed up best by Job, talking to Carrie: “Ana, or Carrie, or whatever the f*** you’re calling yourself today!”).

“We All Pay Eventually” conveys this in such a wonderfully, vivid fashion, it makes for the perfect capping to a season that’s packed in more game-changing twists, violent climaxes, and Big Bads than most prestigious drams can do throughout their entire series. Surprisingly, “We All Pay” doesn’t rest on the laurels of what came before, and stages an intensely personal action sequence, keeping the camera tight during Ana’s fist fight and Job’s knife/belt fight, and refusing to back away when the dust settled, when Hood finds himself without the best friend he’s had his entire life (one who saved him from the father-murdering militant he once was).

Those final images bring a haunting close to a wildly ambitious, devastating third season, which ends on a high note, furthering the thought that Banshee is not just a great action show, but just a great show, period, one that can sit at the table with the giants of dramatic television. Every show has an identity, sure, but no show embraces it with such conviction and glee as Banshee (except maybe The Newsroom, but let’s not make that comparison).  And it doesn’t end without leaving the audience without some great teasers, in the form of Dalton’s first appearance on camera, Bunker and his brother (played by Chris Coy, who is slowly building a terrific career as a character actor), or the possible, highly unlikely union of (former sheriff) Hood and Proctor, a true exploration of the consequences that come from truly embracing who we think we are (I doubt Proctor’s going back to Amish land anytime soon), ending Banshee‘s 2015 on a wildly fascinating, speculative note, one I couldn’t be more excited to see play out when it returns for an eight-episode fourth season next spring.