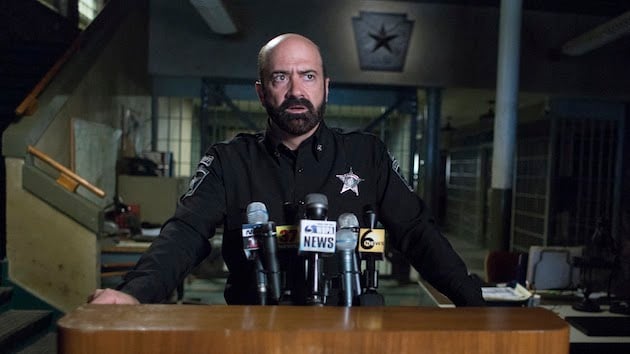 With “A Little Late To Grow a Pair”, the larger picture of Banshee‘s final season begins to crystallize a bit, bringing some much-needed clarity to the show’s jagged timeline and allusion-heavy tactics in the first few episodes. However, the sense of direction “A Little Late” provides is hardly encouraging, doubling down on the rote, one-note elements of this final season, preparing Banshee for a ridiculously complex war and serial killer hunt in the final three episodes with what ultimately amounts to a collection of wheel spinning scenes – a thoroughly surprising and disappointing turn for Banshee as it careens towards its conclusion.

“Careens” is probably too strong a word: the ‘meh’ feeling of just about everything in “A Little Late To Grow a Pair” stems from the episode’s inability to generate any tension out of the various stories in the hour. Banshee is never a bland show, but that’s a lot of what this hour is: characters posturing to each other with empty threats and leading statements, a lot of dramatic material that feels overtly constructed to keep time between larger story beats. The three or four scenes we get with Deputy Cruz are a perfect example: she looks at some papers, stares at a fence, looms in the background, and exchanges a few words with Job. Not only do these scenes do nothing to bring some dimension to her character, but they exist for seemingly no reason, as if the scenes were only filmed to get the episode up to a respectable running time. We already knew she had figured out Bunker and Carrie’s connection to the crimes against Proctor last week; spending precious minutes while she reads papers and trades jabs with Job feels like a refusal to move this story forward, in order to make sure it gets in step with the many other moving parts of this season.

Maybe that’s where my apprehension for this season has been strongest: there’s a strange feeling of construction to this whole season, a feeling that everything is being generated specifically to artificially create tension, rather than find it in the honesty with which it treats its characters and its world. Banshee‘s always been at its best when it feels like its hanging on for dear life to a out of control train of narrative momentum: the show’s spontaneous story twists and deaths have all but disappeared in this final season, the only real surprises coming from the most disappointing turns and reveals: add Randall’s death to the list, a moment that immediately undercuts the rich back story this season’s spent so much time carving out between the Bunkers, radically altering the power structure of Banshee, PA in ways that are clearly going to snowball.

The threads of story Banshee has held so close to the vest become glaringly obvious in this episode, or at least seem to be: Proctor’s failure will bring down the wrath of the Colombians, forcing Proctor to fight wars on two fronts while holding onto his position as mayor, and tracking down Rebecca’s killer (which I imagine would involve fighting Hood one last time at some point, yes? Hood didn’t get too mad about Proctor burning his own cabin down, but that makes sense). This, of course, is alluded to by Brock (who has become an odd mouthpiece for exposition this season), who talks about “fighting for Banshee”, adding the hunt for a serial killer and the impending fight between the Bunker brothers, any one of which appear to be ready to kill off Banshee’s terribly unlucky, naive sheriff (any time a character on Banshee talks about something being all they have left, they lose it. See: the diamonds, Carrie’s family, Rebecca, the Longshadow siblings, Chayton… the list goes on and on). With “A Little Late”, Banshee makes no qualms about putting all of its cards down on the table; the only problem is once they’re revealed, they all feel muted and unsatisfying in one way or another.

The only real highlight of the episode comes from Job and Hood’s lone scene together: in that moment, it feels like Banshee is back to the study of broken individuals pushed to their absolute limits, wildly flailing to cling onto anything they can love to retain their sanity. Isn’t that what Banshee‘s always been about? Given that everyone’s pretty much lost that thing in their life, I suppose Banshee‘s final season can be viewed as a mediation on the idea of power, and how little influence it actually wields on our emotional well-being. Hood gave up his power, and felt hopeless; Proctor took all of it, and was equally helpless. Under that guise, the desperation of Banshee‘s characters this season at least gives the season some thematic unity; but in the face of everything Banshee‘s been able to accomplish in three seasons, how these themes are being expressed in story is thoroughly disappointing.

From Agent Dawson’s trite personality to the silly, Basic Instinct-flavored ‘twist’ at the end, there isn’t much about “A Little Late To Grow a Pair” that doesn’t feel like a step down from previous characters and stories, a glaring flaw that only becomes more obvious the more “A Little Late” refuses to progress any of its narratives or ideas. With only three episodes left, Banshee‘s running out of time to redeem this final season; and the more BDSM clubs we visit, subdermal implants we observe, or Calvin’s rage sweats we bear witness to, the less confident I am that Banshee will be able to twist all these threads into something powerful, and worthy of the show’s legacy.

Banshee continues its underwhelming fourth season with a sweaty hour of wheel-spinning.